With several new additions, and key departures the New York Rangers will look to build on last year's success on the power play, and penalty kill.

The New York Rangers had quite a bit of turnover this off-season, as we saw several key pieces leave via free agency, which resulted in big holes throughout the lineup. Some of the biggest names include Brian Boyle, Anton Stralman, Brad Richards and Benoit Pouliot, who all contributed immensely to last season's Stanley Cup Final run.

Both Boyle and Stralman were top five on the team in penalty killing minutes last season, while Pouliot provided some extra punch to the second power play unit in front of the net. Then there was Richards, who was a prominent figure on the Rangers power play, and led all Rangers skaters last season with 301:39 of total power play ice time.

These are pretty big shoes to fill considering last season's success, but with several additions of their own and some internal options, the New York Rangers hope to improve on last season's special team numbers. Let's take a look how they might go about that.

The only big-name signing this off-season for the Rangers included the addition of Dan Boyle on a two-year deal, who was brought in to bolster the power play. He will most likely replace the recently departed Brad Richards on the top power play unit, and will be relied upon to log big minutes with the man advantage. While Boyle may be on the wrong side of 30, there's no denying that he can still be a force when presented with the right opportunity.

Lundqvist will be great, duh

The goaltending section of Blueshirt Banter's annual season previews have been pretty easy the past couple of years. Why? Because of Henrik Lundqvist, that's why.

Lundqvist will be great, duh

For the Rangers, this will likely be a significant upgrade on the point, which was previously occupied by Richards last season. Boyle still possesses a heavy shot from up top, and essentially brings the same playmaking ability that Richards provided. It's been a long time since the Rangers had a viable threat from the point, a legitimate power play quaterback (Brian Leetch?) and it could pay huge dividends for them next season.

When the Rangers power play was firing on all cylinders, it was due largely in part to their net-front presence, and causing havoc in front of opposing goaltenders. Pouliot was one of the main ingredients to that success, and more often then not he was planted right in front of the crease. One of Alain Vigneault's biggest adjustments last season was making a goalie's life difficult, and not allowing him to see the initial shot.

Chris Kreider is someone who could benefit greatly from the departure of Pouliot, as he will likely slot into the role of manning the front of the net. Kreider is a physical monster, and opposing teams will have a hard time moving his 6-foot-3 frame from out front. Also look for Ryan Malone to be another option as well, given that he cracks the opening night roster. He was a force with the Tampa Bay Lightning atop the crease, and was the recipient of many goals simply by planting himself in front of the goalie.

Filling holes on the penalty kill

When Brian Boyle and Anton Stralman departed for the Tampa Bay Lightning this summer, the Rangers penalty killing units took a huge blow. Boyle and Stralman logged massive minutes for the Rangers while shorthanded last year, and replacing those minutes will be the toughest challenge this upcoming season. Ryan Callahan was shipped to Tampa at the trade deadline, and the Rangers will be without his penalty killing services for the full season. Depending on how the opening night roster shakes out, you could see several players step up into expanded shorthanded roles

When the puck drops on the 2014-15 season, the Rangers very much know what they have up front, and yet still, there seem to be many question marks.

No group of players was asked to re-tool its game more under new head coach Alain Vigneault than the New York Rangers defensemen.

Dominic Moore, Carl Hagelin, and Kevin Klein are some players that immediately come to mind. Moore and Klein saw their fair share of shorthanded time last season, and could be relied upon a little more this season with the departures of Boyle and Stralman. So could Hagelin, who flourished on the penalty kill under Vigneault last season. Hagelin's speed is his biggest strength, and with his ability to back off opposing defenders, he could be in line for another big season for the Blueshirts. The Rangers have plenty of options to replace Boyle and Stralman, but whether or not those options will do it as effectively still remains to be seen.

Taking a look at the numbers

It's always interesting to see how the numbers have been trending over the last several years for the Rangers. Since this is the preview regarding the special teams, we'll take one final look at how the Rangers have transitioned from the era of John Tortorella to Alain Vigneault.

When the power play was good

When Mike Sullivan, former Rangers assistant, was heading up the power play, the Rangers were too stagnant on the power play, not forcing penalty killers out of their basic shape and spacing. When a team is shorthanded in a 5v4 situation, the penalty kill tries to keep a rectangular shape, and shift that rectangle around to cut off opportunities toward the goal.

The key to breaking that rectangle is puck movement, and when the Rangers were at the very least creating more chances on the power play last season, it always coincided with good puck movement.

This play begins with Montreal in good shape. McDonagh has no pass to make and no shooting lane, so instead of trying to force something to the front, he makes sure the puck gets down low, but throws it to an area Mats Zuccarello can find it in. 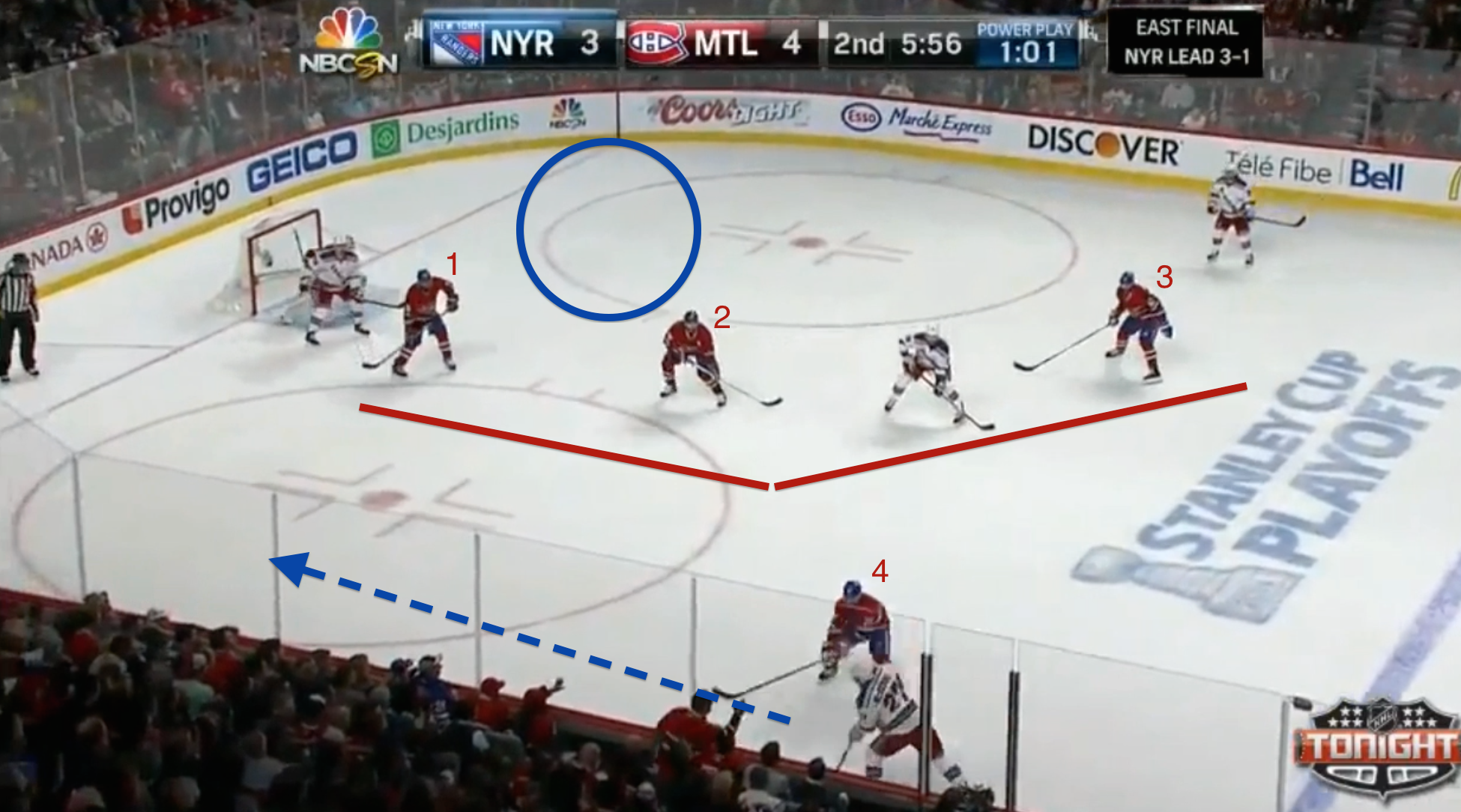 This is oversimplifying things, but by moving the puck, especially from one side of the ice to the other, it causes the opposition to move. As Zuccarello corrals the puck along the far boards, the Montreal PK begins to collapse toward Zuccarello. But look at Derick Brassard. He's right in the middle of Montreal's rectangle, giving Zuccarello a target, and serving as a complete zone and spacing breaker. If the puck gets to Brassard, it will force Montreal to collapse even more, freeing up space for McDonagh, who's in the bottom right of the frame. 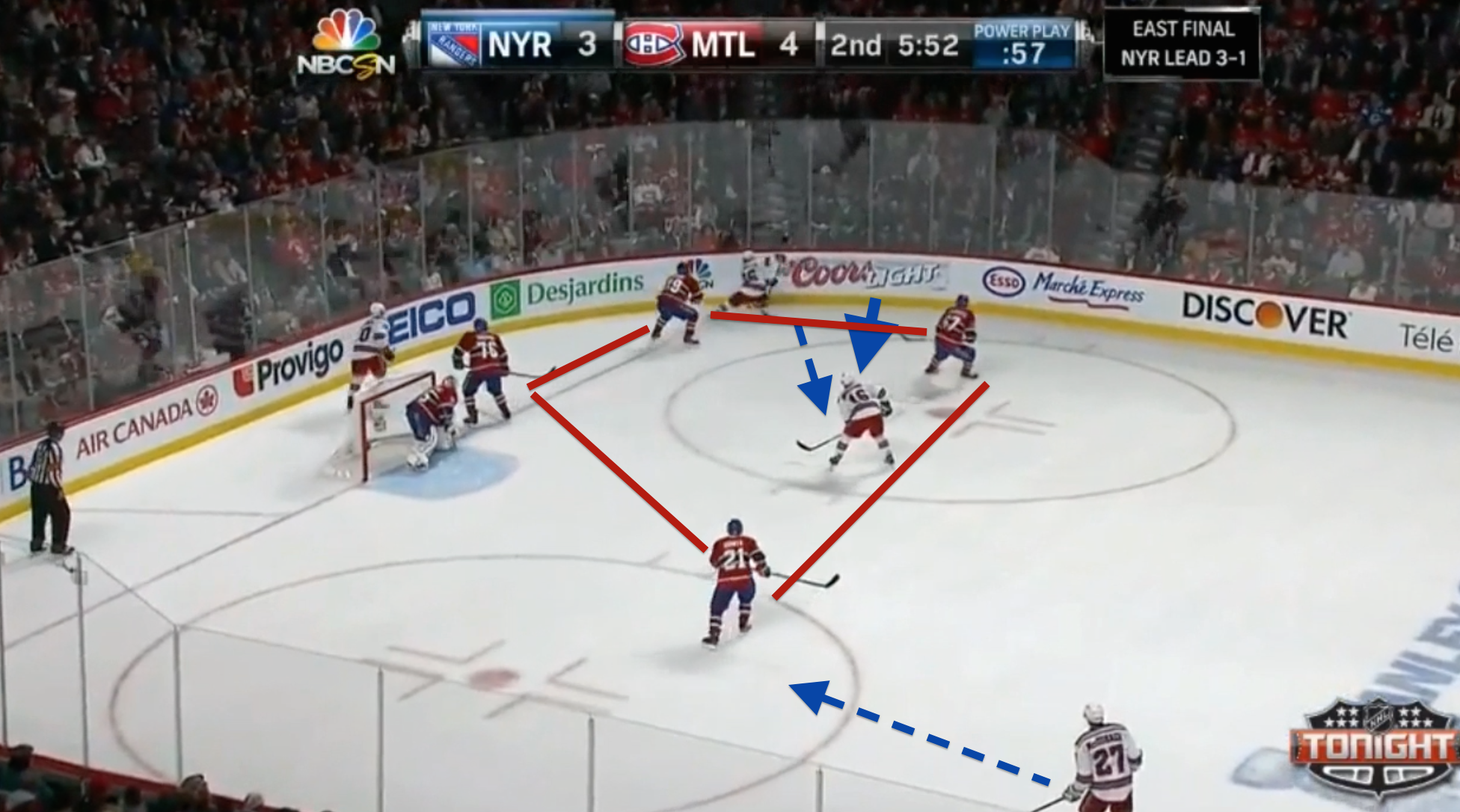 Zuccarello quickly pivots into a passing position, and hits Brassard. Those kinds of passes—a seam pass, or any kind of pas that breaks down the basic shape of a defense—will always force an immediate adjustment. As the puck makes its way to Brassard, Brian Gionta starts to skate toward him, abandoning his contain on McDonagh. Not only that, but because Gionta moves, it also forces P.K. Subban, who was doing a good job on Kreider below the goal line, to also adjust his footing. 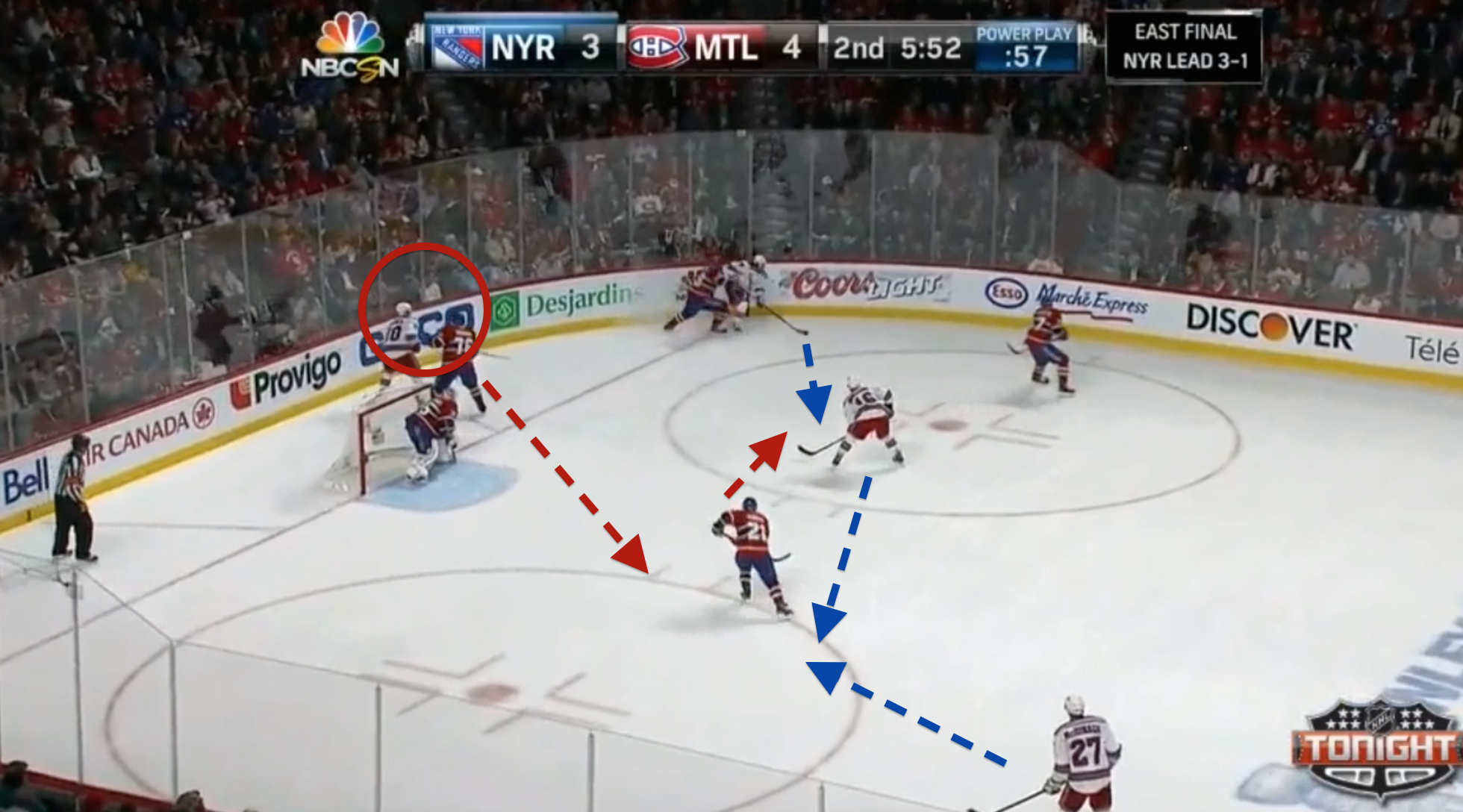 What happens next is the biggest component to what can sustain future success for the Rangers power play. With more players on the ice, a team is inherently in an advantageous situation. But the key is to use creative players, ones who can best maximize the extra space on the ice, and turn good chances into great chances. When Brassard receives this pass, he's immediately met by Gionta, but he doesn't panic. Brassard makes one stick handle, and opens himself up to make a pass to McDonagh. And now look at the zone spacing. Montreal went from having the Rangers walled off in the top corner of the zone to leaving McDonagh acres of space to walk into. And key to this play is also Subban, standing in front of Dustin Tokarski, who has to account for Gionat's move, and leave Kreider all by himself. 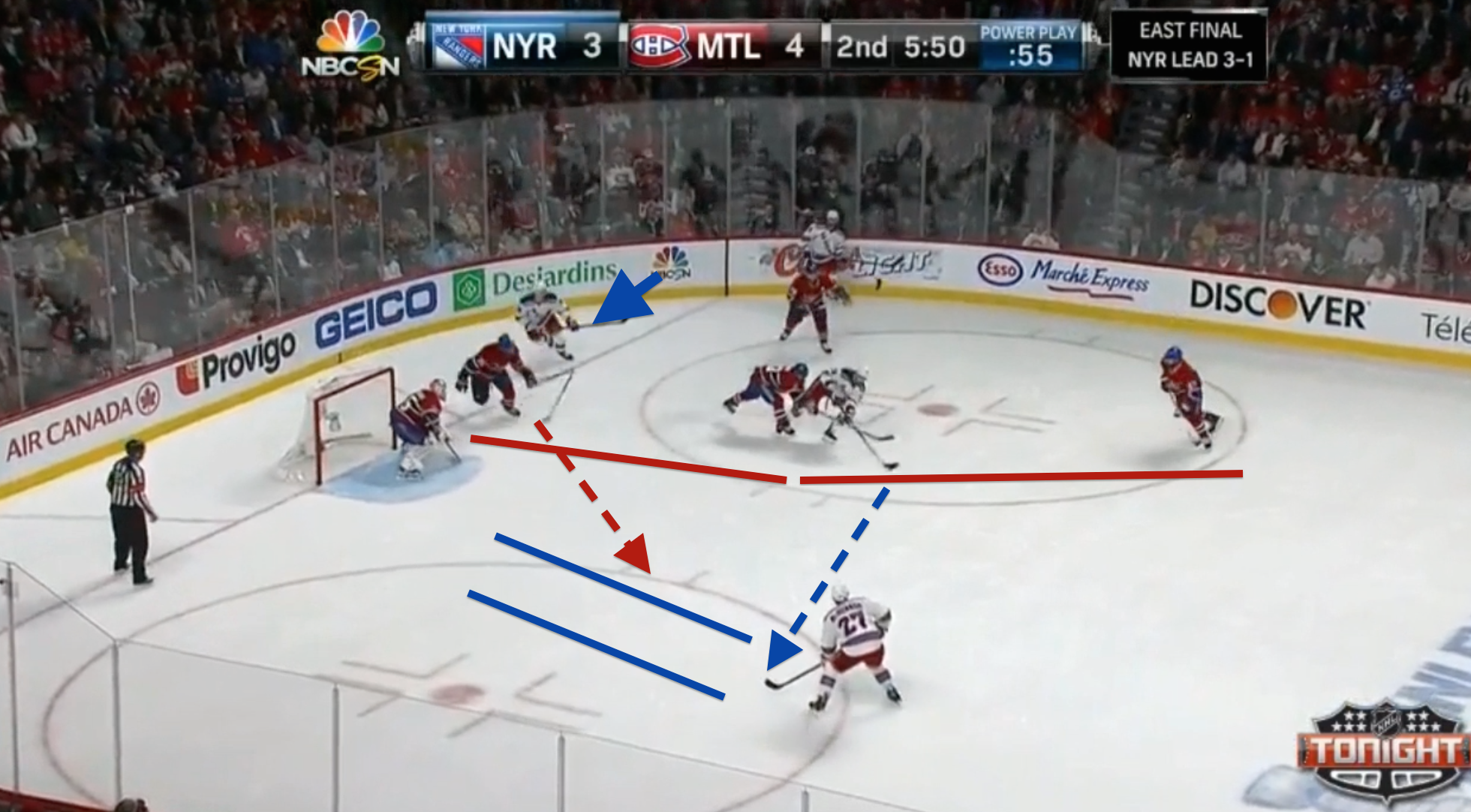 Now Montreal is pretty much screwed, but again, with creative players like McDonagh out there, they're about to be more screwed. When McDonagh accepts the pass from Brassard, he's in a great shooting position, and he sells the play as much. His posture screams "shot," so much that Subban completely sells out looking to get a piece of the puck. Meanwhile, Kreider is quietly slipping into a bona fide goal scoring position. 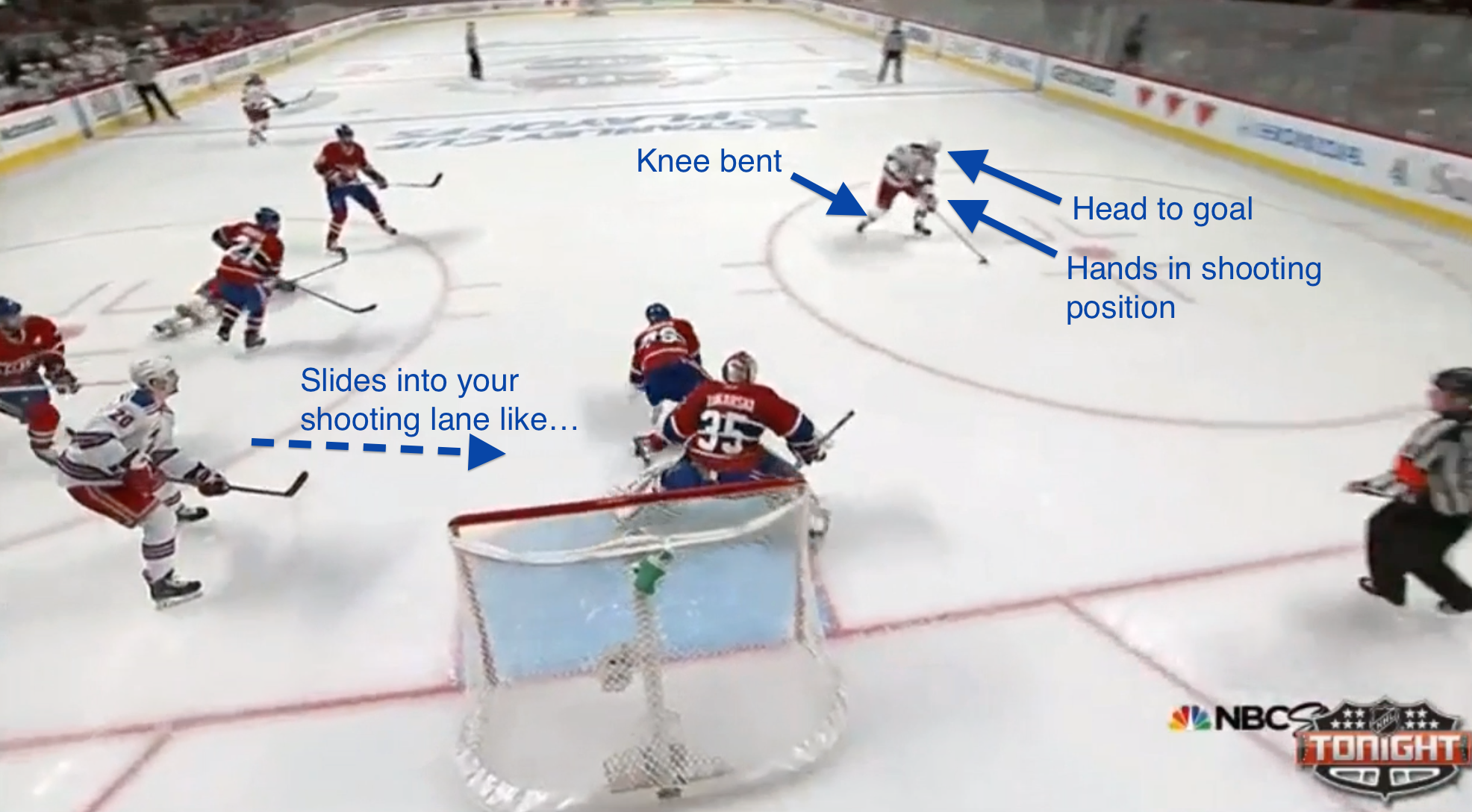 McDonagh outwaits Subban, Tokarski glides way out of his crease, practically into the circle, and what was a good scoring opportunity, which became great, is now a sure-fire goal. 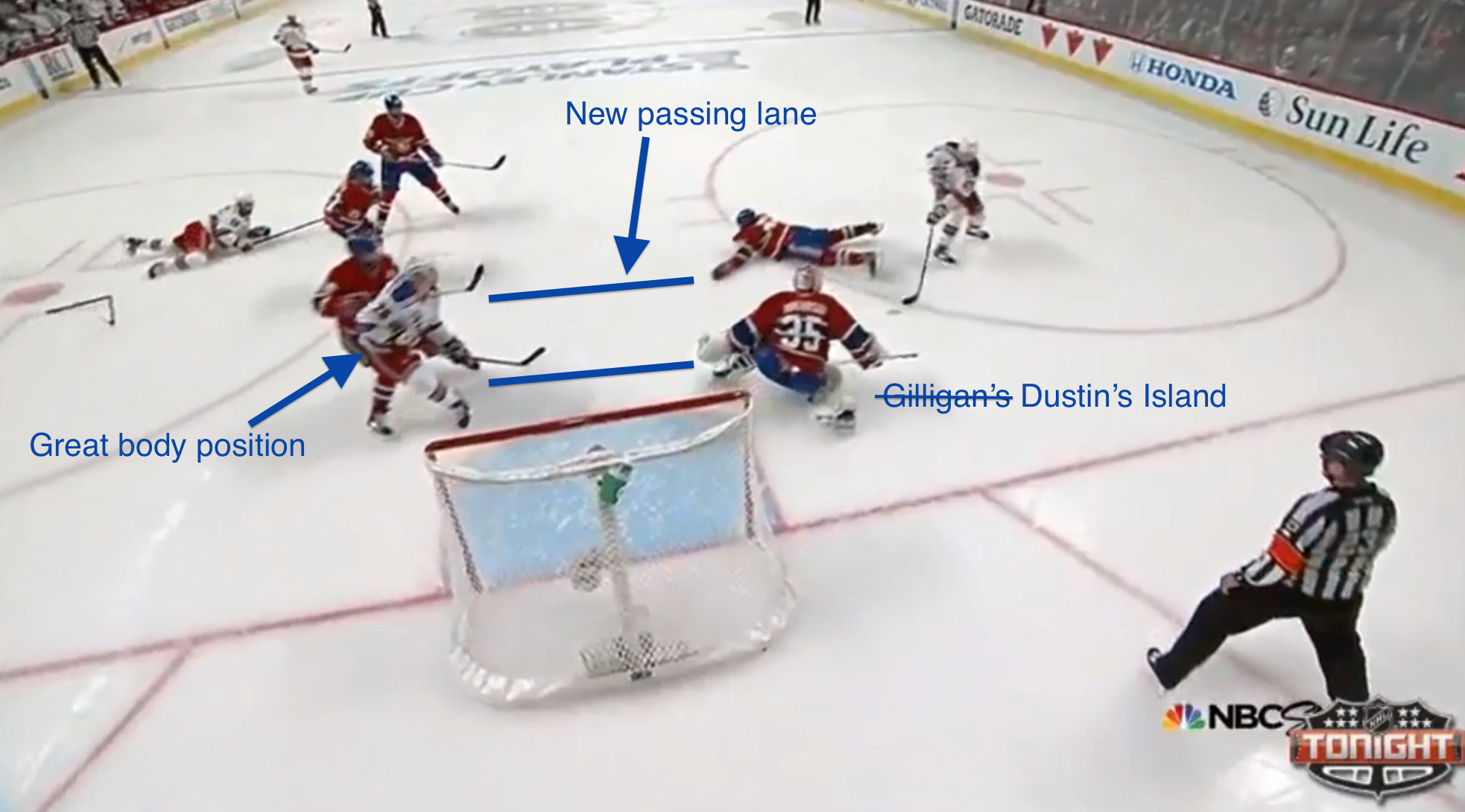 Aside from lacking a power play quarterback through seasons of inept special teams plays, the Rangers really lacked a presence on the point in the form of a big, booming shot. It was the biggest problem with using Richards up top, and really, when you don't have a player who can threaten with his shot from the blue line, it neutralizes many other things you can do on the power play. Boyle, however, is not lacking in that department.

The great thing about having this kind of shot on the power play is you don't need to necessarily diagram plays for Boyle to be effective. To be clear, there are ways to create situations for Boyle to use his shot, and specific plays, but like was the case with the goal above, something can be created out of nothing.

As the Sharks gain the zone on the power play, Boyle is the last player to come across the blue line. As he takes a drop pass, look at how high the pressure is from Anaheim's penalty kill. With a player like Richards on the point teams could sag closer to the dots, keeping their shape. But with the high pressure the Ducks send at Boyle, it creates an easy pass to Thornton, and also subsequent passes from there. 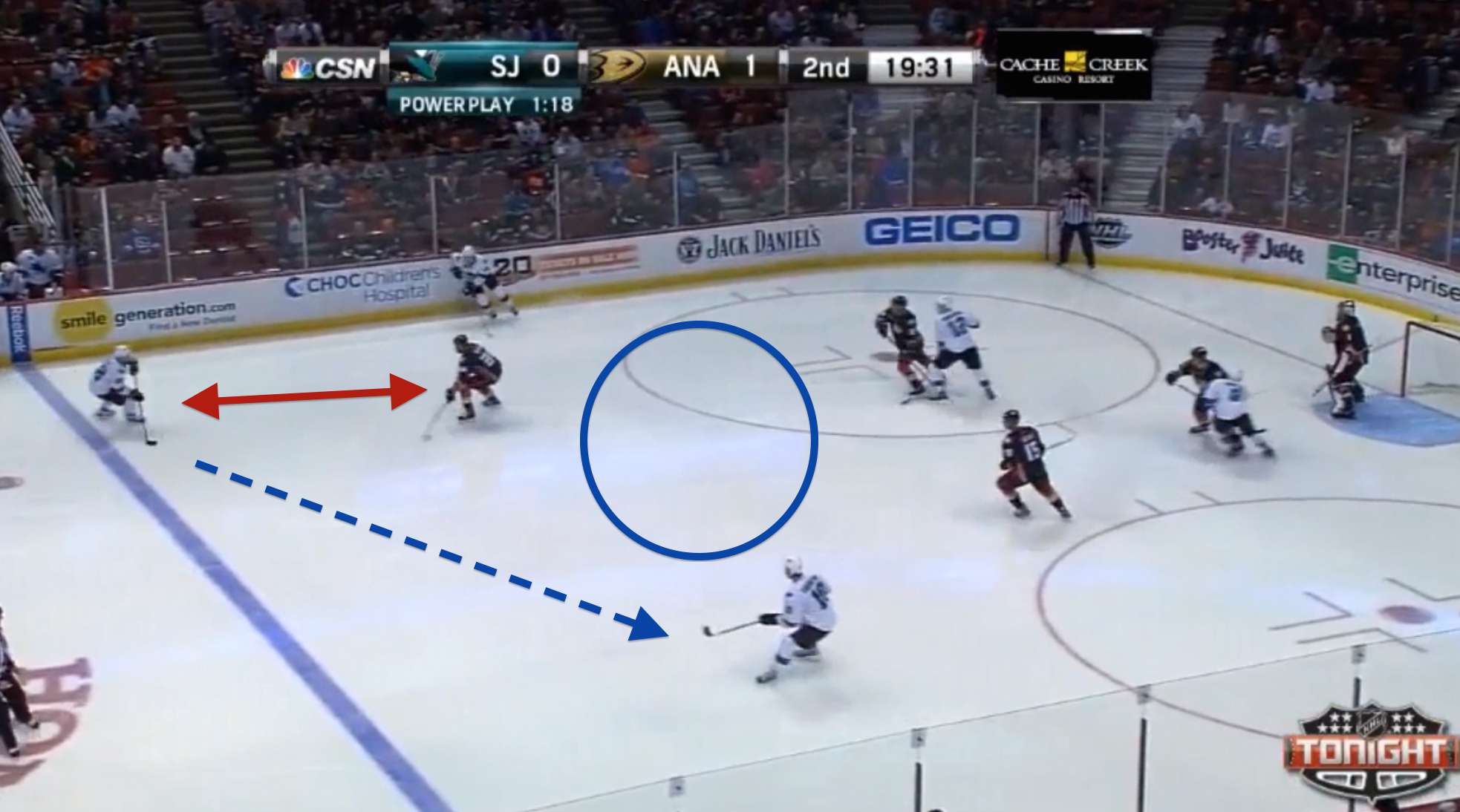 The Sharks actually cramp that top area of the zone, and put themselves in worse position. Logan Couture should have continued down the wall, but instead, stays too close to Boyle. Thornton has a wide-open seam pass to make with no target. So Thornton holds the puck, and looks to create elsewhere. It's simply worth pointing this out though because Boyle's threatening shot alone will create new passing lanes. 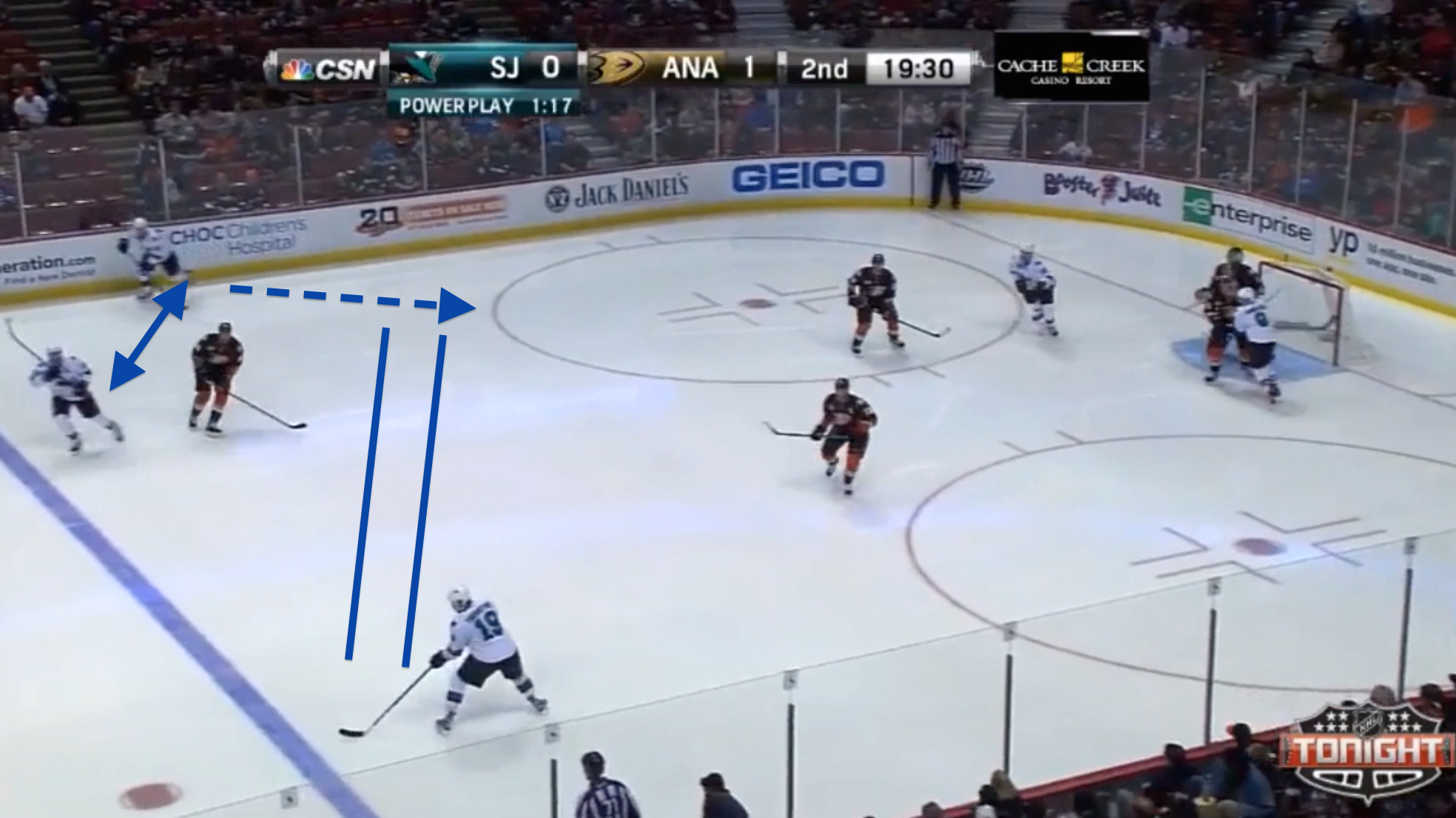 This sequence continues to go south for San Jose, as Thornton, with nothing to shoot at, elects to go to goal. Considering how fresh off the zone entry the Sharks were, and with a minute-plus remaining on the power play, Thornton would have been better off re-setting the play, but instead, fires a shot that gets blocked. 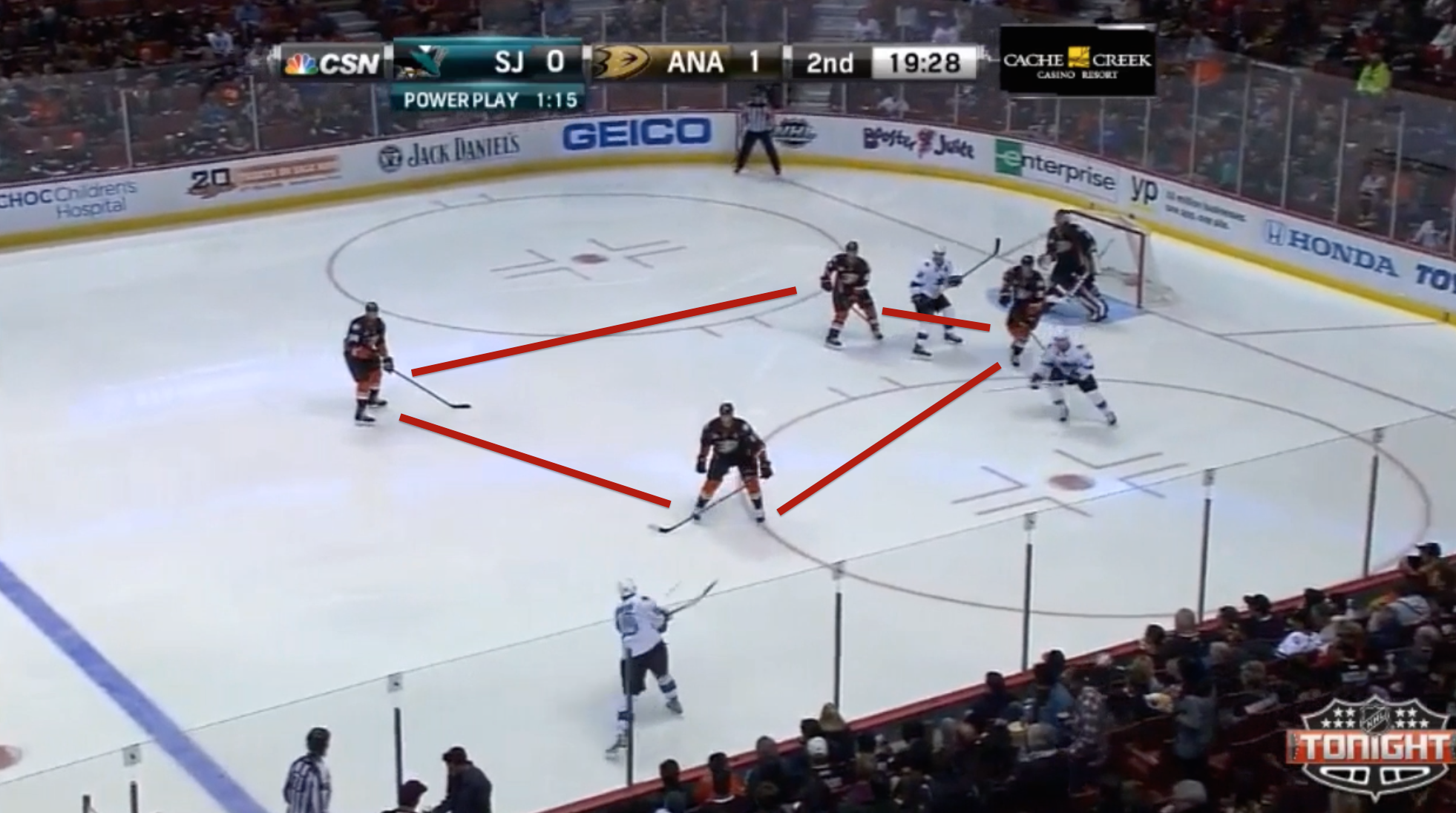 What happens next perfectly illustrates this idea of Boyle turning nothing into something (and more specifically, a goal). As the puck kicks back out toward the point, Anaheim is in even better shape to block a shot. There's an additional San Jose skater who is also clogging Boyle's lane. Yet he unearths a monstrous slapper that's labeled for the top corner. Jonas Hiller barely even reacted. 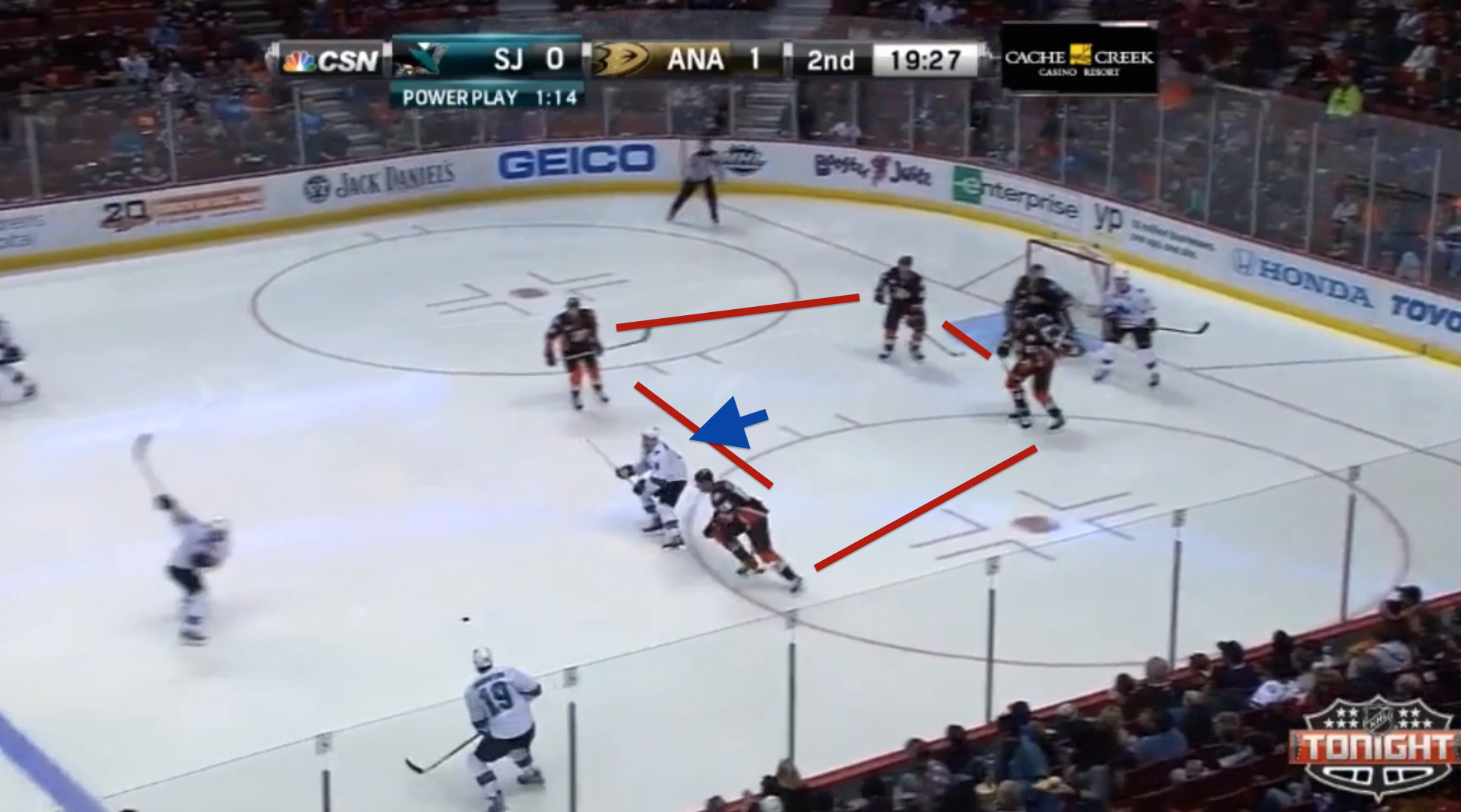 This reverse angle shows what Boyle saw as he was walking into the shot. And what he saw was really nothing. The Rangers didn't have a single player who was capable of scoring this kind of goal last season, and Boyle will provide a new dynamic to the Rangers special teams. 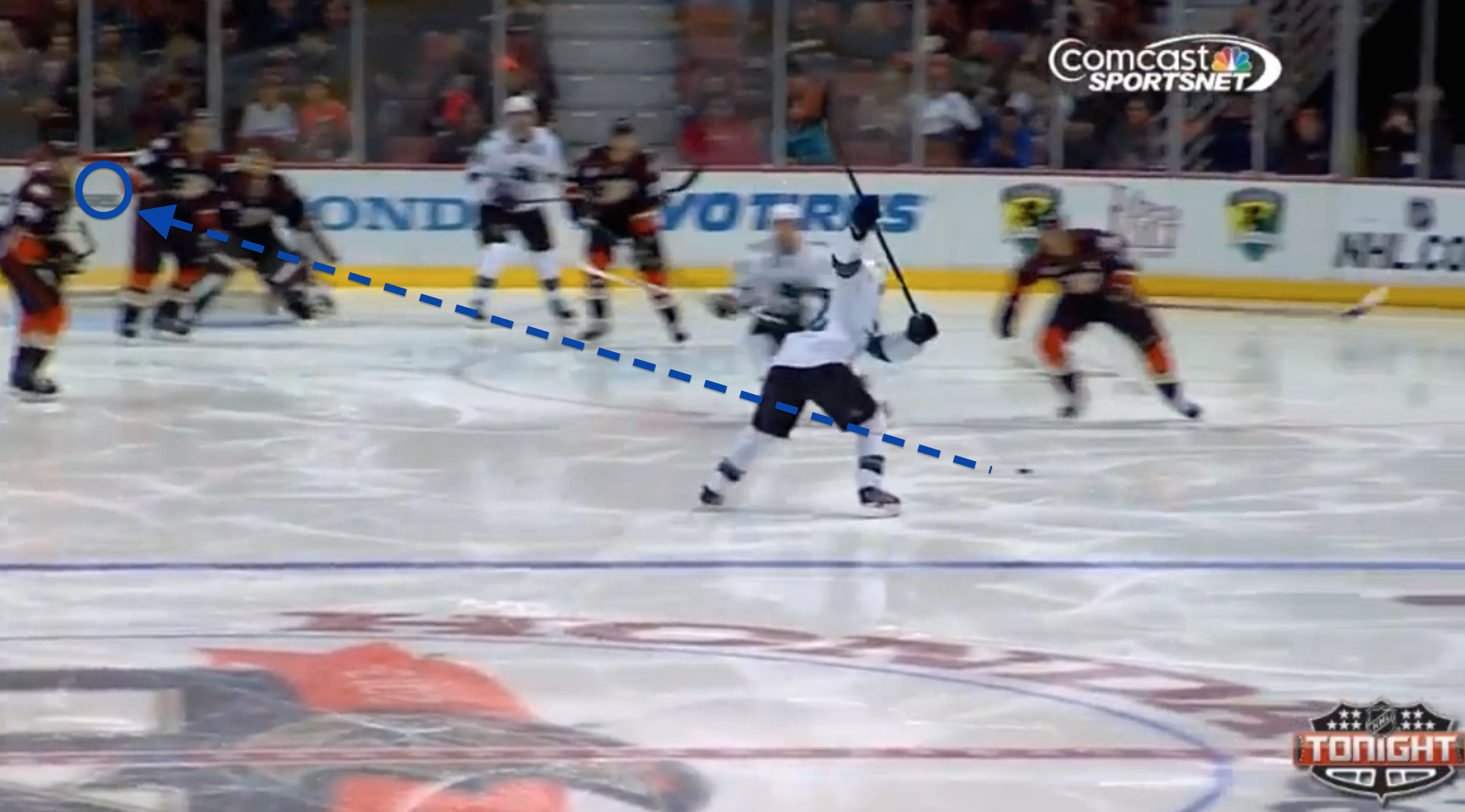