Martin St. Louis' first goal as a New York Ranger came by way of a Mike Sullivan power play so who says he's bad at coaching the power play?

It's been a while hasn't it?

In case you've forgotten, this is the video breakdown where I take a video of a Rangers goal and use some internet hocus pocus to break it down all fancy like and give you, the gentle reader, a nice explanation of what happened that led to the goal. You can see the previous three entries here, here, and here. So let's have some fun.

First, as always, video of the goal

Man that was so relieving...but how were the Rangers able to get past that impenetrable force known as the Mike Sullivan Power Play(tm)? 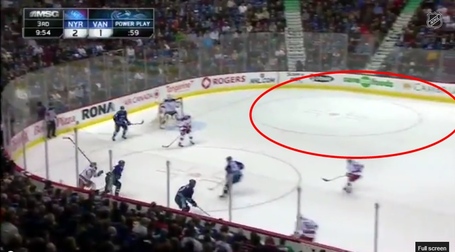 Doesn't that power play set up look familiar? Overload one side of the ice while leaving the weak side as empty as Torts' patience this year. Clearly this won't end well for the Canucks, but this image brought back some really painful flashbacks. I was rocking in the corner of my room for a few minutes after I took this screen cap. 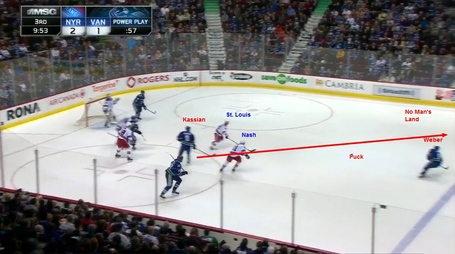 Now, a little detour for a second, if I may. Last Wednesday I was looking at this goal and prepping this breakdown when I captured an image similar to this and tweeted this:

Zack Kassian threw what is quite possibly the stupidest blind pass I've ever seen pic.twitter.com/dTc6LJd6yk

and then this happened

So...yeah...Zack Kassian favorited a tweet where I called him stupid. I stand by that by the way, I have no idea what Kassian was thinking, but Yannick Weber was nowhere near where that pass was going and compounded with him falling, gave Rick Nash and Marty St. Louis an ample opportunity to break out two on one. 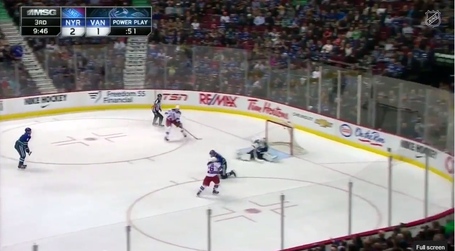 So...there's no annotations or editing on this image because I wanna know what you guys think Eddie Lack is trying to do here? Is Marty St. Louis so small that a kneeling Alex Edler is too much of a screen for Lack to see the shot? That has to be the only rational explanation to be in that position on a shot that is going bar down.

So...that's how Mike Sullivan contributed to Martin St. Louis scoring his first goal for the Rangers, hey, who ever said he was a bad coach?

Here's the video of the goal once again