Rangers vs. Canadiens series preview: Speed, goaltending, and special teams at the forefront

Original Six rivals will meet in the Eastern Conference Finals with a Stanley Cup bid on the line.

Share All sharing options for: Rangers vs. Canadiens series preview: Speed, goaltending, and special teams at the forefront

If the Rangers' second round series against the Penguins taught us anything, it's that a lot can get thrown out the window during the playoffs. So while the Rangers haven't played Montreal well of late, especially at the Bell Centre, there's not much use in exploring those numbers. Instead, let's break down a few other areas of this series, where each team has the edge, and how this thing might potentially play out.

Who will get the call on defense?

The Rangers blue line has been one of its biggest strengths all postseason. And while Montreal certainly has a unit comprised of very talented defensemen, Michel Therrien has waffled when it comes to a sixth defensemen. That role has been filled by three different players, with Nathan Beaulieu, a 21-year-old rookie, getting the latest crack at the job. Before him came  Francis Bouillon and Douglas Murray. If the Rangers had their pick for Therrien, Murray would surely be in the lineup. Odds are, that spot will most likely be occupied by Beaulieu, but if the playoffs reveal anything, it's depth, or lack thereof, can rear its ugly head this time of the year. Add in how well the Rangers' bottom six is playing, and a sixth defensemen becomes that much more important, even if Beaulieu is only averaging 8:47 of ice time a night. 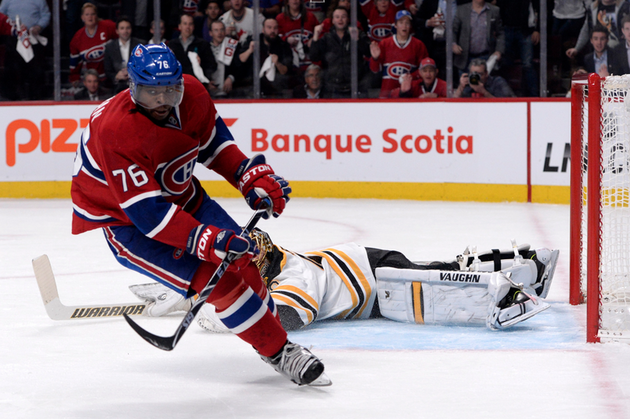 P.K. Subban leads the Canadiens defensively, and has been playing some incredibly impressive hockey. He'll look to hit whoever he's playing against early and enough, and he's a good enough skater and then some to keep up with the Rangers' pace. Presumably, he'll mach up with the Chris Kreider, Derek Stepan, Rick Nash line, but we'll know the answer to that question early on Saturday. Subban will see much of his ice time with Josh Gorges, while that duo and Alexi Emelin have been Montreal's best defensemen. Emelin has been paired with Andrei Markov, and how those two can match up against maybe the likes of a line of Carl Hagelin, Brad Richards, and Martin St. Louis might decide a lot.

On the Rangers' side of things, there's no better way to prepare a group of defensemen for any task than going up against the Penguins. Anton Stralman ended the regular season in a bit of a lull, but rebounded against Pittsburgh in a big way, as he end Marc Staal did well to limit Sidney Crosby. Ryan McDonagh also seemed to round back in form, which couldn't have come at a better time.

These two team's biggest strength might be in the crease, where Henrik Lundqvist and Carey Price proved in the first two rounds why they're two of the top goaltenders on the planet. Both just went through pretty difficult second round series—each going to seven games—but one area that benefits Lundqvist is his reduced workload during the regular season. He started 63 games, still the second-highest number in the league, but down by his own standards. The way the Bruins were able to beat Price was by throwing bodies and traffic toward the crease, and the Rangers will need to get to the dirty areas to make life difficult for Price. Both of these players will need to be on top of their games for their respective teams to advance, but let's be clear: If Lundqvist is able to turn in the kind of performances he was toward the end of the Penguins series, goals will be very hard to come by for Montreal.

Lots of depth at the forward position

Alain Vigneault and Terrien are similar in that they're not scared to roll four lines. Case and point: Brian Boyle and Dale Weise opened the scoring in each team's Game 7 in round two. Montreal's top guns have come on as late, with Thomas Vanek turning it on after being demoted to the fourth line, and Max Pacioretty scoring in game's 6 and 7 against the Bruins. Vigneault will be forced to again figure out who to use McDonagh and Girardi against, as Vanek and Pacioretty play on separate lines. Gap discipline will pretty important for both teams, as both forward units love to get out in transition and push the pace. Let them fly through the neutral zone untouched, and you're looking at scoring chances going the other way.

If the Rangers put everything together up front in this round, the product may be too much for Montreal. New York got by in rounds one and two without top production from its top guys. Rick Nash is still goalless in 14 postseason games, and while he's playing well, if he starts scoring, along with Derek Stepan, it will only add another element to the Rangers' offense. On paper, the Rangers have three very strong offensive lines, and a more-than-serviceable fourth unit.

If there's any clear advantage one of these teams hold over the other, it's that not only is the Canadiens power play not bad, but it's rather good. The Bruins found that out firsthand in the second round, to the tune of an 8-25 performance. The Rangers' power play, at a historically anemic pace, managed to find a key goal at a crucial moment in Game 7 against Pittsburgh, nothing short of a miracle. And it's a puzzling deficiency, as one would guess the likes of Nash, St. Louis, Stepan, and McDonagh would be rather good with a man up.

Not only will the Rangers have to stay out of the box against Montreal, but they'll need their penalty kill to be as good as it was against the lethal Pens to limit Montreal. That starts with Lundqvist, but the contributions of Nash and Stepan can't be discounted in those situations, and of course, the Rangers defensemen block shots better than any other unit in the league.

If you watched any of the Bruins-Canadiens series, you'll know Boston was burned by giving Subban way too much time and space to operate and quarterback the power play. The Rangers don't have a particularly aggressive penalty kill, and are happy to let teams play from the outside, clogging passing and shooting lanes. Montreal is really good at zipping the puck around the zone on the power play and creating its own lanes, and how the Rangers are able to maintain their spacing agains that puck movement is one of those small battles that will have a major impact on the series.

It can't be said enough: Discipline is a major key to this series. Just like against Philadelphia, the Rangers are much better off keeping it 5v5. Give Montreal continued chances on the power play, and they'll get burned.