A closer look at Kreider's collision with Carey Price

Share All sharing options for: A Train Called Kreider

About three minutes and fifteen seconds into the second period of Game 1 in Montreal, Chris Kreider turned on the jets to get a mini-breakaway. With his right hand he reached around and poked the puck through and past Alexei Emelin, getting past him in the blink of an eye. For just a fraction of a second it was just Kreider and Price, one-on-one. But, from behind, Emelin dove out and made an attempt to swat the puck away from the speeding Kreider. Emelin's stick made no contact with the puck. It made contact with Kreider's right skate. The contact was significant enough to jeopardize Kreider's balance and we all know what happened next.

What happened next is something Rangers and Habs fans have been going back and forth about since it happened. Watch the video above again and focus on try to focus on three things.

1. Firstly, take notice of the moment where Emelin makes contact with Kreider's right skate. You can see Emelin's stick bend in this slow-motion view of the play.

2. Next, focus on the amount of time that passes between Emelin's stick making contact with Kreider's skate and the subsequent shot and collision. It all happens in the blink of an eye. Not a lot of time to make a decision when your legs aren't underneath you and when you're only thinking of getting a shot off.

3. Finally, turn your attention to Kreider's body language as he crashes into Carey Price. Kreider's legs seem to position in an attempt to do a hockey stop. However, he appears to be going too fast to execute this move and doesn't have enough room, especially with his right leg tripped up, to pull this off. The result is that he more or less slide-tackles Carey Price's right knee.

It's my humble opinion that Kreider had a split second to choose what to do; follow through on the shot (which was almost certainly the only thing on his mind) or make every effort to make a full hockey stop or avoid Price and the Habs net. Hockey is the fastest game in the world. Chris Kreider was going at near his top speed and didn't have his legs underneath him. Can a 6'3" 230 lb. Kreider stop in that amount of space after being tripped? I'm not a physicist or someone who has much experience with skating very fast and being tripped several feet away from the goal crease but my opinion is that he does not have enough space to do anything but go into the net.

"I don't think he's a real dirty player," Prust said of Kreider. "But in this situation he went skates first right into his leg... we call that accidentally on purpose."

"I reviewed the incident and obviously it was accidental contact, but let's put it this way: He didn't make much effort to avoid the contact."

Below are two pictures of the incident taken from the very same video embedded in this article. Now, before we go down this rabbit hole I'd like to state the following; I find that still images more often than not can spoil and muddy our understanding of collisions in the sport because they lack context, game speed, and other factors that are necessary to make educated opinions on plays like this one. However, I've provided you all with the very same video where these still images come from and I think that when you take into consideration just how quickly things happened on the play in question you'll come to understand that Kreider was left with very little choice but to collide violently with Carey Price's right knee. 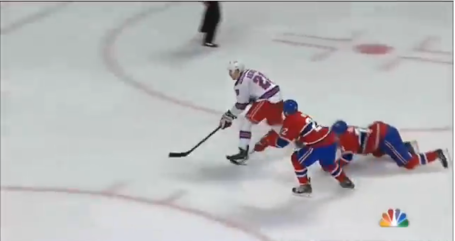 This is where Kreider's right leg goes out and away from him after Emelin's stick makes contact with his skate. Take note of where he is in regards to the hash marks on the ice. It's worth noting that Dale Weise had no impact on the play (especially in regards to an infraction or inhibiting Kreider's ability to avoid the goaltender) despite being in frame. 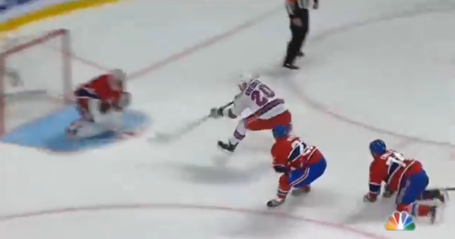 Kreider somehow manages to get the shot off a split-second after being tripped up. Take note of where his body is compared to the first image and how much distance he has traveled in a fraction of a second. Take notice of his legs and body language. From this body language he must now, somehow, either swerve around Carey Price and the Canadiens net or perform a full hockey stop. Or, I suppose, jump over the net and crash into the boards. There simply isn't enough room and balance to compete against Kreider's momentum and jeopardized balance. The collision, in my opinion, was inevitable.

What some Canadiens fans are bringing up is Kreider's history with colliding with goaltenders, including a collision with Marc-Andre Fleury in the Rangers last playoff series.

I couldn't find a video of this on YouTube (if you find one, please share it with us in the comments section) but this gif shows clearly that Chris Kreider was pushed from behind by a sprawling Kris Letang. The only thing Kreider seems focused on is where the puck is. In fact, you can even see his left shoulder make contact with Fleury as he braces himself for impact (I am sure some people will see this as him purposefully hitting Fleury). On this play, Kreider didn't make enough of an effort to avoid contact with Marc-Andre Fleury but that doesn't take away from the fact that the collision was caused by Letang's interference with Kreider a moment before the Rangers rookie collided with Fleury. Pay close attention to Kreider's left leg and how it shoots forward after it is kicked from behind by Letang. Kreider was penalized on this play, the goal was disallowed, and Kris Letang was not charged with a penalty on the play.

What this should have been called? Goalie interference on Kreider, a penalty on Letang for pushing him from behind on a scoring chance... and probably embellishment by Fleury but I can't honestly make that call without seeing another angle on the play. Just to be clear, I'm not entirely convinced Fleury embellished on the play, especially because it looks like Kreider's shoulder might have made contact with his helmet.

The other example some Canadiens fans are pointing to is Kreider's collision with Ottawa Senators goaltender Craig Anderson on February 21st, 2013 that resulted in a serious injury to Craig Anderson.

There is no good angle of this play that I can find on YouTube or elsewhere (again, if you find a better angle please share it with us in the comments section). On the play in question you can see that Kreider's legs get taken out from underneath him by Senators defenseman Marc Methot. The best view of it is 0:48 seconds into the video. You can clearly see Kreider's legs get taken out by Methot's stick and, unfortunately, Kreider slides right into an unsuspecting and vulnerable Craig Anderson.

Kreider was not penalized on the play (nor was Methot) and he shouldn't have been. He was interfered with and his collision with Craig Anderson was in no way his fault. With that being said I would still appreciate alternate views of both the collisions with Fleury and Anderson if they're available.

Now, do these three instances of Kreider colliding with goaltenders speak of a player who now has a "history" of running goaltenders or do they speak to you of a big player that has breakaway speed having trouble stopping himself when he his interfered with by defenders?

Here's Kreider's take on his collision with Price from the New York Daily News:

"I thought Emelin was coming across kind of hard so I chipped it ahead and it wasn't sitting for me, so I just had my head down trying to settle the puck," Kreider said Saturday night. "I think I got a shot - no I put it wide, right? - and somehow lost my footing. I thought maybe someone pressured me from behind. I seem to have issues staying on my feet on those (plays). Then I went in skates first and had too much momentum. I couldn't really avoid him. It didn't feel too good."

Kreider admits that he was focused on the puck when Emelin made contact with him, and when you're focused on the puck (just like every hockey player who has ever had a breakaway is) you're going to collide with goaltenders when your feet aren't where you thought they were going to be. Big things that are going fast need time and space to stop going fast, especially if they are no longer in control of themselves. Kreider is a big thing, he was going very fast (does he have another speed?), and he got tripped by Emelin's stick... so he went into the net. The only place that anyone could have gone in that play.

Anyway, that is just my take on the whole thing. I very well could be wrong or too swept up in Rangers playoff fever to recognize my own bias but I'd like to think that I have it right. What do you guys think? Let me know in the comments section.