When Ryan McDonagh takes the ice, he'll spend most of his time opposite Sidney Crosby. But it might be what he doesn't do that's the key to stopping the Penguins dynamic captain.

Share All sharing options for: Rangers vs. Penguins preview: Inside the Ryan McDonagh, Sidney Crosby matchup

One of the biggest challenges for the Rangers in their upcoming series against the Penguins will be containing Sidney Crosby, and the player who will be most charged with that task is Ryan McDonagh. The Rangers top defenseman seemed to be rounding back into form toward the end of their first round series, and had a pretty good warmup challenge for Crosby in another Hart finalist in Claude Giroux.

Crosby is the best player on the planet; there's really no debating that. But sometimes it's not quite what you do against him, but what you don't do against him that leads to success. Defending a player with his array of skills, playing Crosby too aggressively can lead to not only getting beat, but getting embarrassed. Much like what makes Henrik Lundqvist so successful in net, the ability to play deep, and to let the play come to you when trying to limit Crosby can be the answer. Here's a look at why.

This first play comes from the first Rangers-Penguins matchup this season, a game New York easily won 5-1. But in the opening minute of the contest, Crosby nearly found the back of the net as McDonagh got a bit over-aggressive trying to defend one-on-one.

If this play looks familiar, it's because Jakub Voracek scored on a similar move versus McDonagh in the first round. But on the Crosby play above, McDonagh is in even better position to make a play on the puck, but fails to do so.

Crosby corrals this pick at center ice. McDonagh isn't in frame, and is positioned closer to the blue line. Crosby will skate the puck straight toward him. 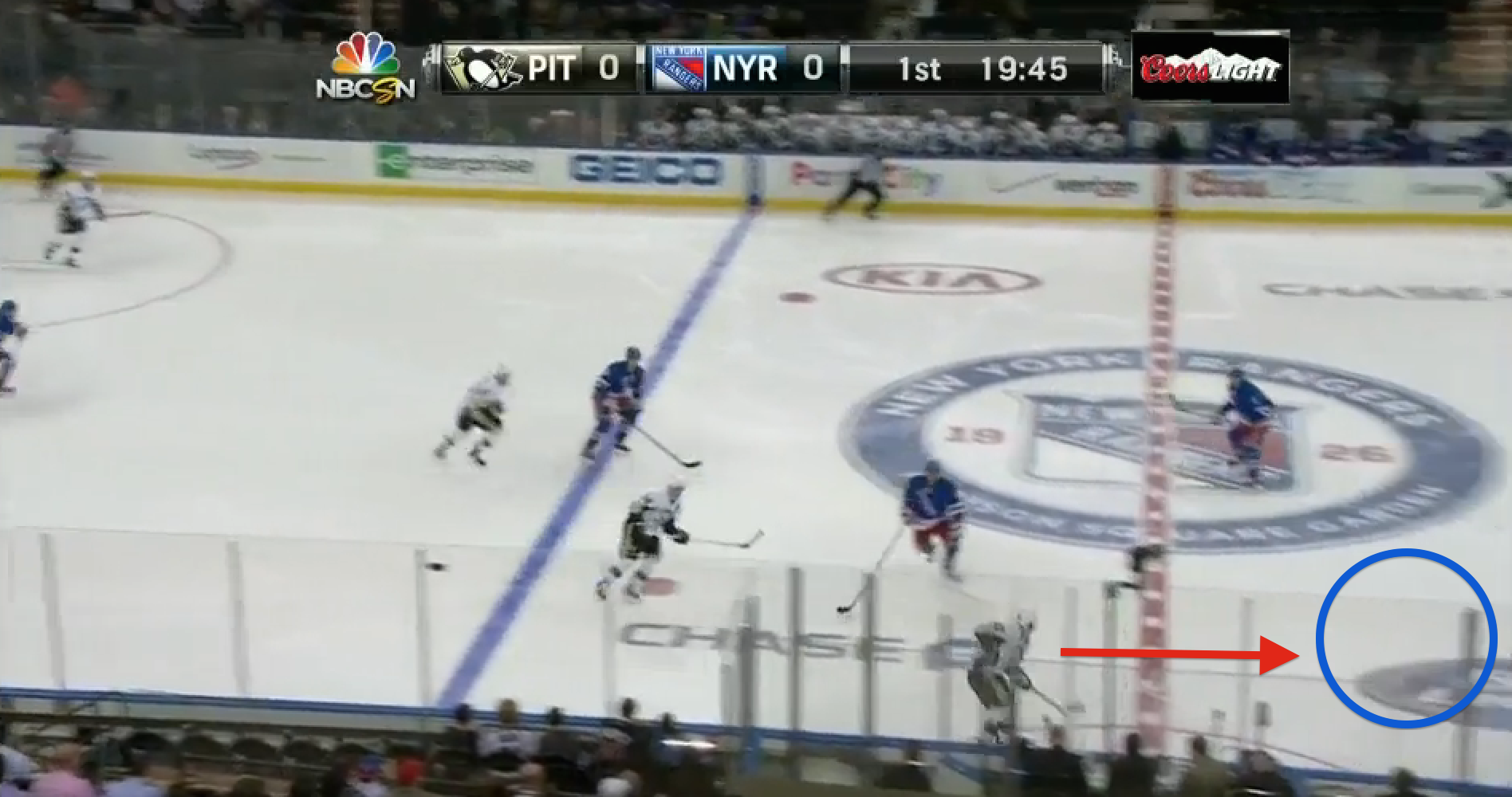 McDonagh generally has a pretty active stick, and uses his reach to maintain good body position. But on this play, McDonagh gets in a bit tight, and flails and misses the puck. With a player of Crosby's caliber, McDonagh set himself up to get beat. 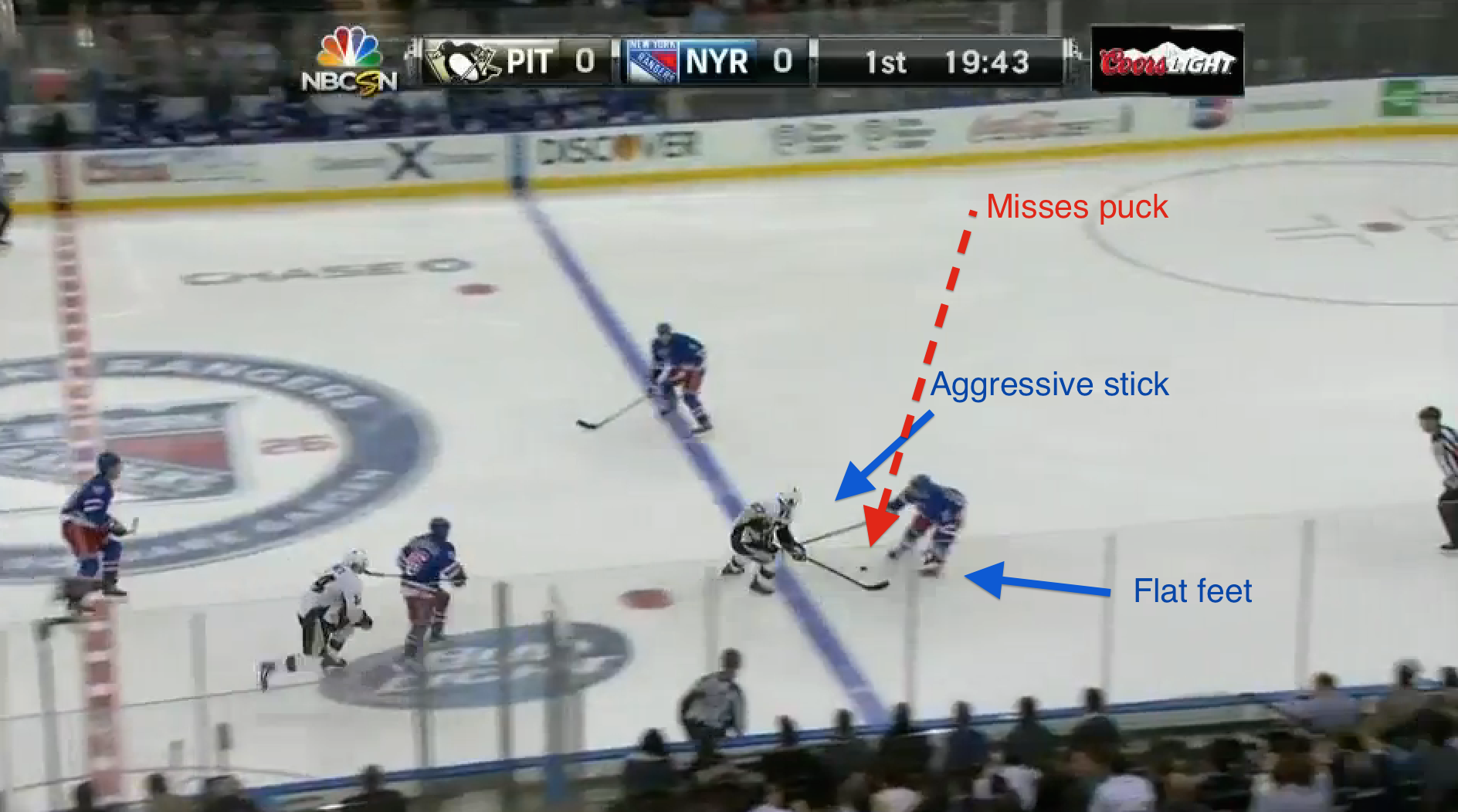 With Crosby getting a step on McDonagh, he puts his body between the puck and then man. McDonagh, who is great in recovery using his reach, doesn't have a chance to make a play on the puck. Crosby, who is strong on his skates, is guaranteed to get to the net here. Luckily for McDonagh, Ludnqvist bails him out on the play. 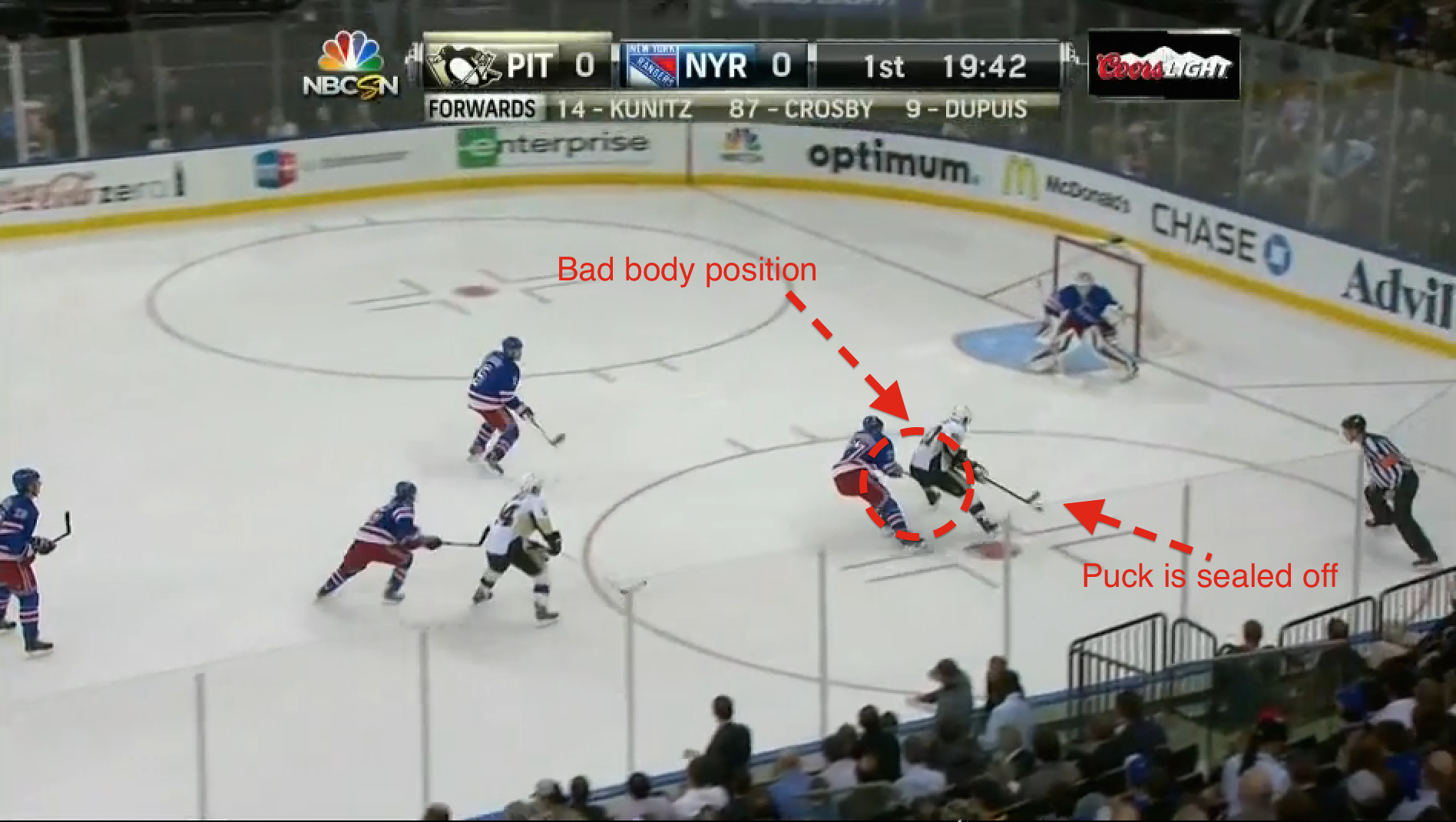 This next play comes from a game about a month later. The Rangers lost in a shootout, and despite Crosby having a much better offensive game, McDonagh showed here a more effective approach to defending against him.

McDonagh actually starts this play out in even worse position than the one above. His hips are turned around, and he needs to spin and face the play to locate Crosby. 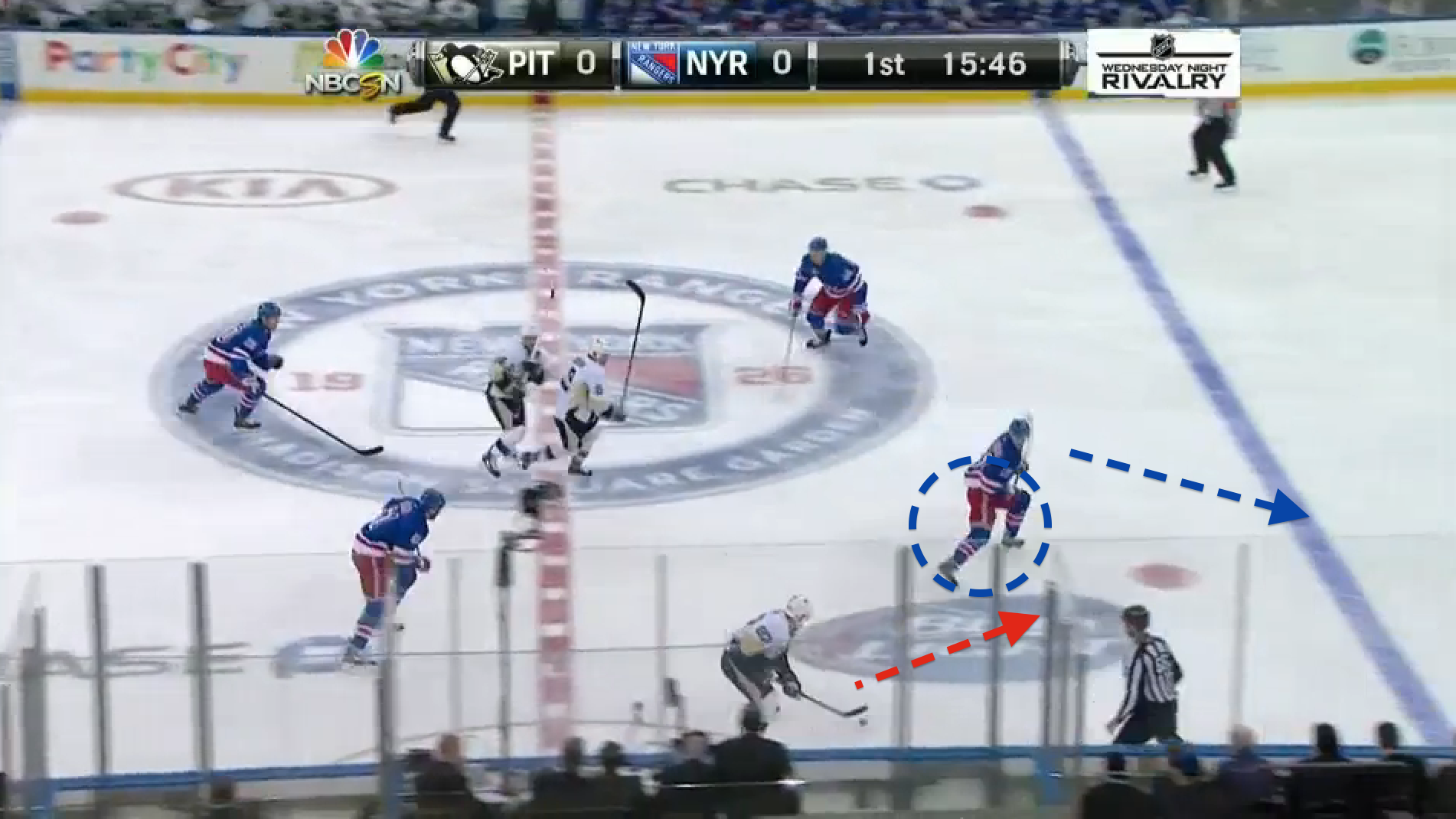 Once McDonagh has his head around, he puts himself in much better position. By lagging off Crosby, he doesn't allow himself to get beat, and instead, has his stick in good position, and forces Crosby to make a play. 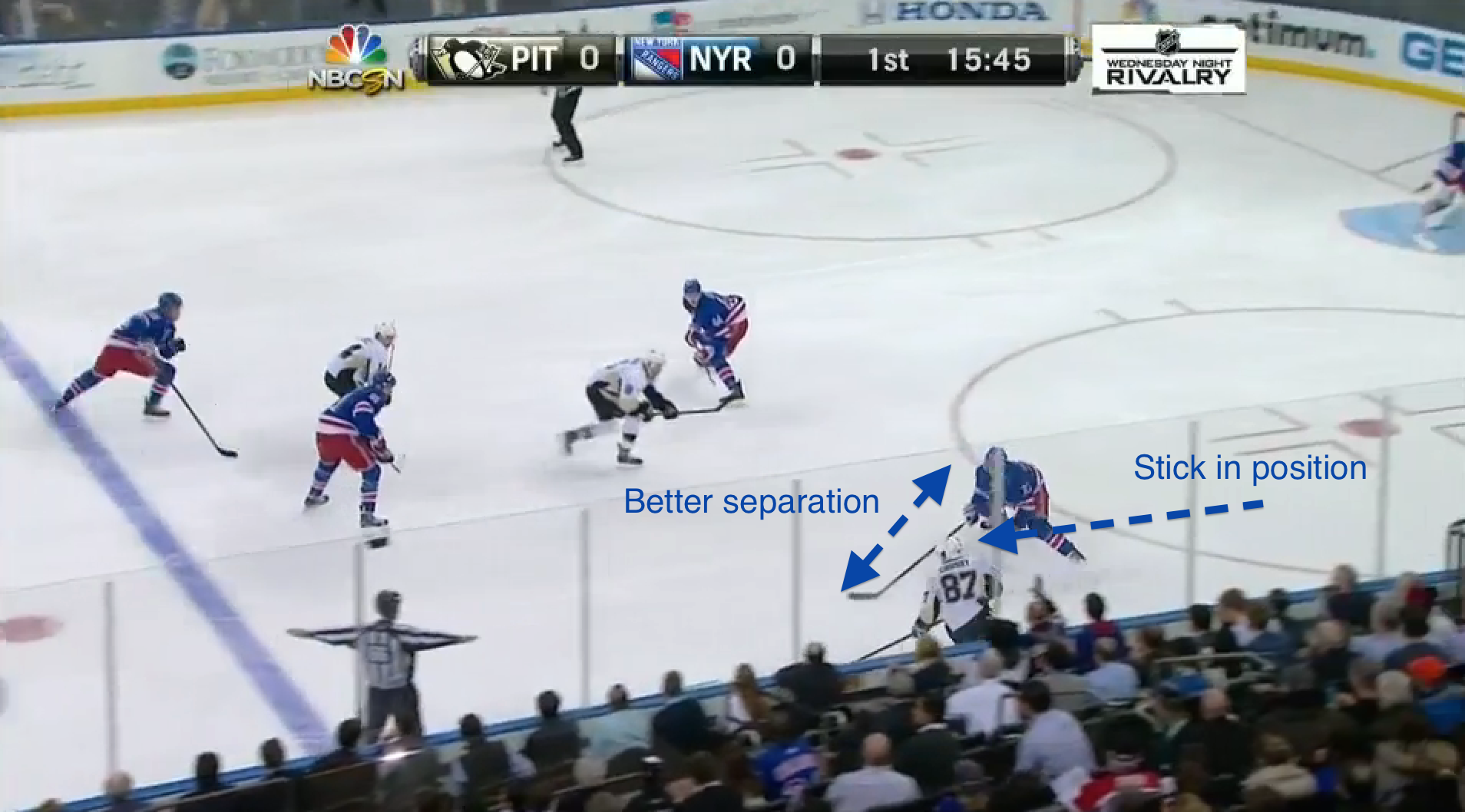 His defensive posture forces Crosby toward the benches—away from the goal—and out of the danger area. He maintains really good separation, while keeping his stick in the lane set to make a play on the puck. 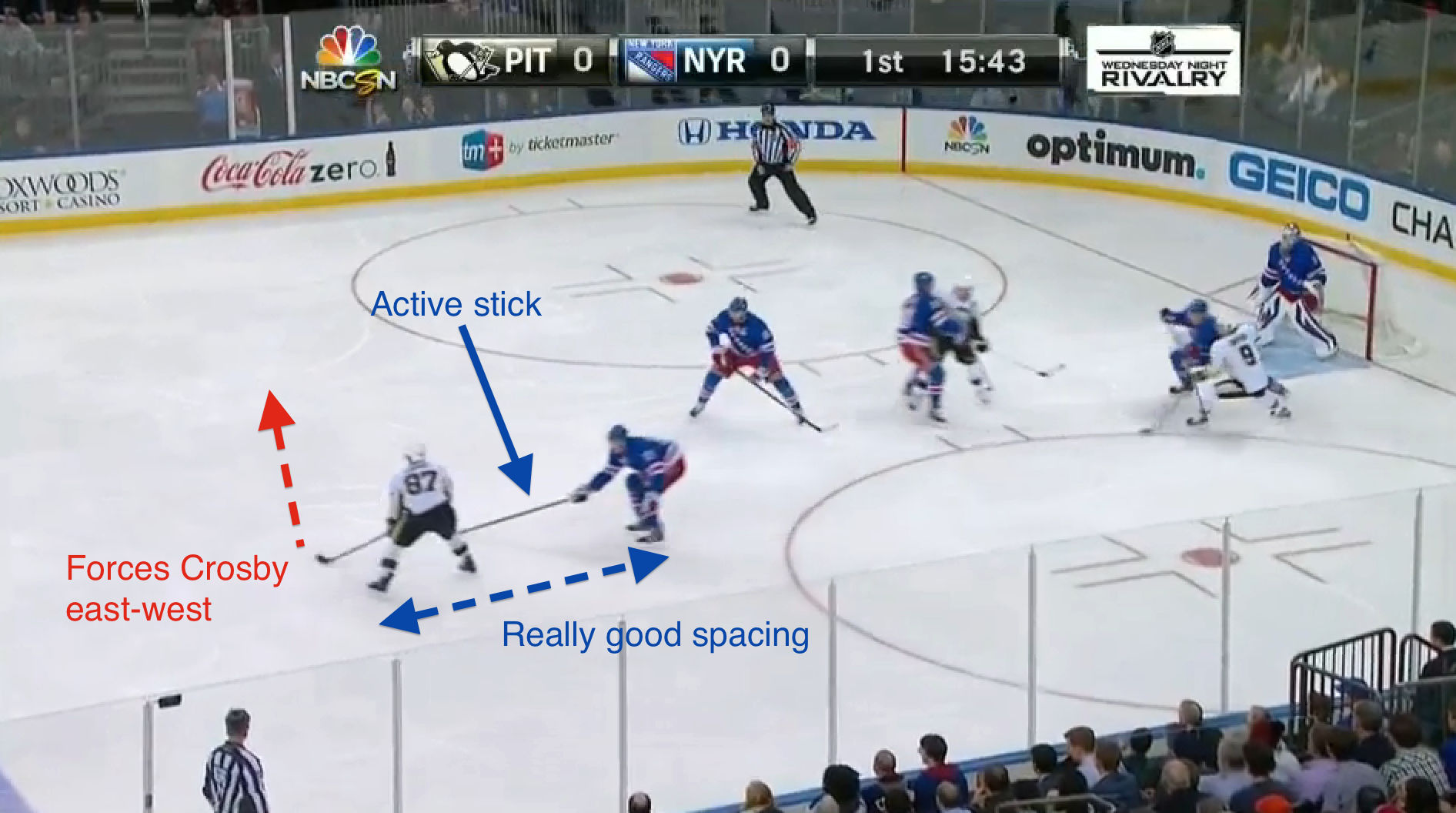 What separates McDonagh as a budding elite defender is his ability to finish plays. After forcing Crosby to cough up the puck, he makes a quick recovery, and repositions himself to make another play on the trailer. 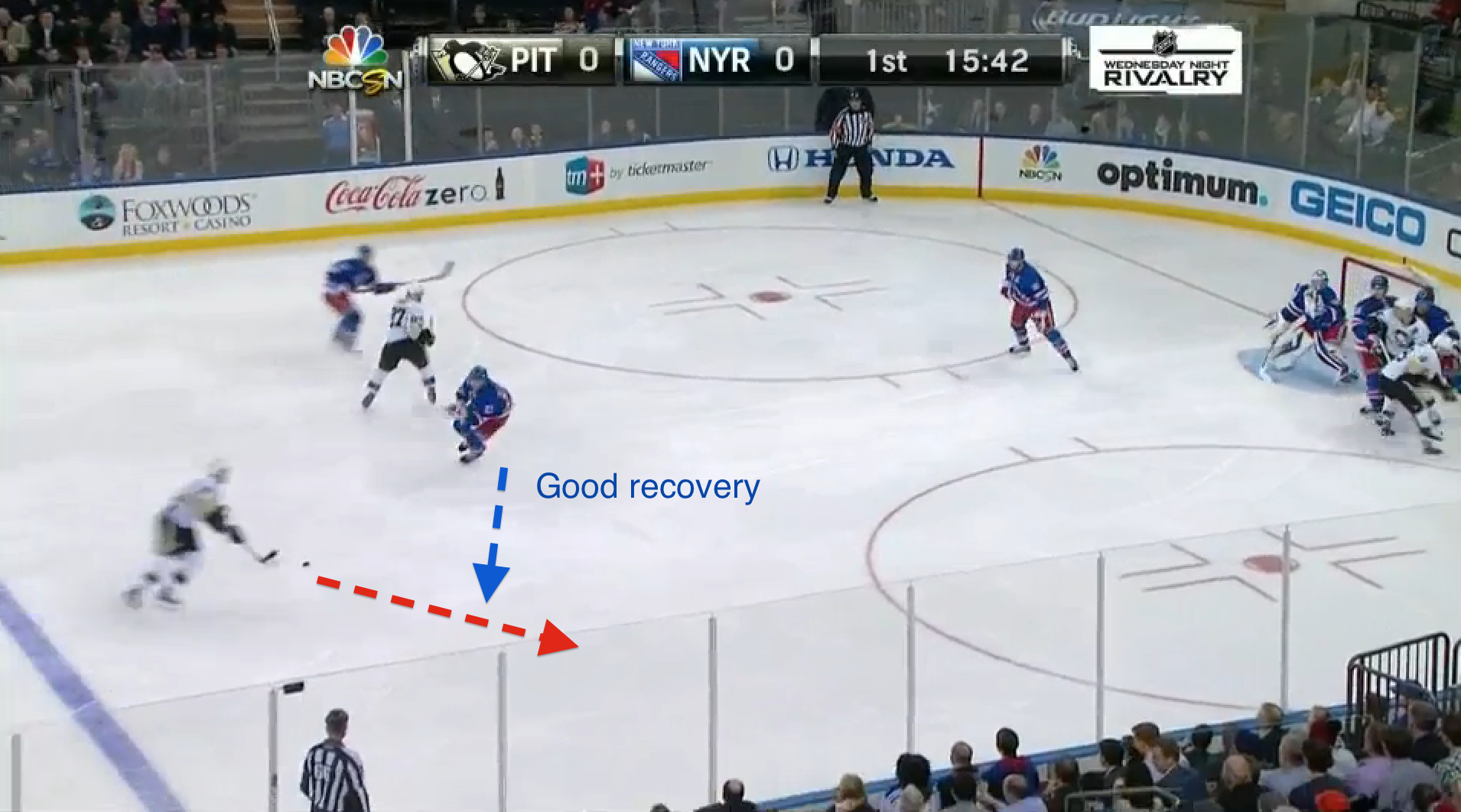 Finally, McDonagh does the same things in recovery that allowed him to get the puck off Crosby's stick, and eliminate the threat once and for all: Good spacing, an active stick, and good lateral mobility. 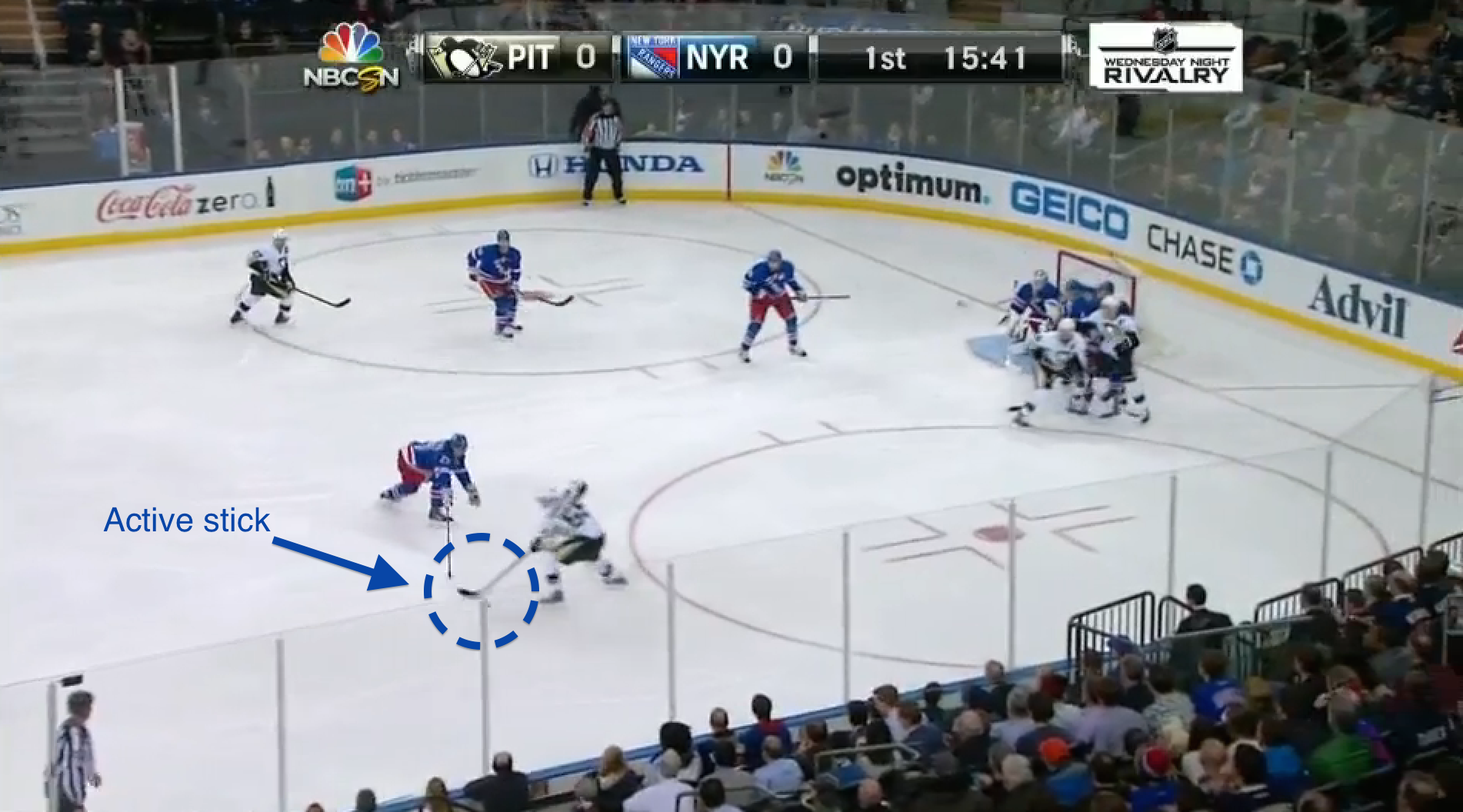 Crosby in an incredibly dynamic player. The Rangers can probably only hope to limit him, and not completely shut him down. And one of the keys to doing that might actually be doing a little bit less.