Alain Vigneault tweaked the Rangers penalty kill to account for P.K. Subban, and the adjustments did the trick.

Share All sharing options for: Stanley Cup Finals: The small tweak Alain Vigneault made to neutralize the Canadiens power play

Of all the reasons the Rangers will be one of the NHL's final two teams standing (Henrik Lundqvist, balanced scoring, a galvanized locker room... Lundqvist again), New York's penalty kill is right near the top of the list. While New York has held its own in 5v5 situations, an anemic power play and strong special teams from their first three opponents meant things could have gone south fast had the Rangers faltered with men in the box.

The Flyers, Penguins, and Canadiens all had strong power play units, while New York more than answered the call against each club respectively. Only Philadelphia has a higher kill percentage than the Rangers this postseason, and it faced 18 fewer chances. (Also, all of the Flyers penalty kills came against the Rangers power play, which again, wasn't very good.)

But what has been so interesting about the Rangers penalty kill success is its ability to adapt to new wrinkles. The Flyers power play strength was its net-front presence Wayne Simmonds. The Penguins had all the zip and flare that comes with a Sidney Crosby and Evgeni Malkin led unit. And the Canadiens, the latest team to be stymied by the Rangers, funneled its power play through all-word defenseman P.K. Subban at the point.

Watching the Canadiens take down the Bruins in round two of the Eastern Conference Playoffs, Subban was downright dominant, recording seven points in the series, five of which on the power play. Against New York, that number shrunk to two points total, both on the power play.

Subban certainly caught the attention of Rangers head coach Alain Vigneault, who made some tweaks to his penalty to kill defend against Subban, and a scheme that finds success through generating point shots.

Conventional wisdom will tell you that once a player retrieves the puck in his own zone shorthanded, he should immediately attempt a clear. But the Rangers went against the grain, knowing the Canadiens were loading up at the point, and instead took advantage of the vertical space between Montreal's forecheck and the point men.

When Montreal tried to execute a zone entry by dumping the puck deep, they were sending three forecheckers to the goal line to retrieve the puck. With both point men at the blue line, there was a ton of vertical space in the zone for the Rangers to exploit.

A variation of that turned into a Rangers shorthanded goal in Game 4.

This starts when Ryan McDonagh wins a puck along the boards, and two Canadiens immediately apply pressure to try to win it back. Instead of going right to McDonagh, Brian Boyle skates toward him, but gives him a target in a soft spot. 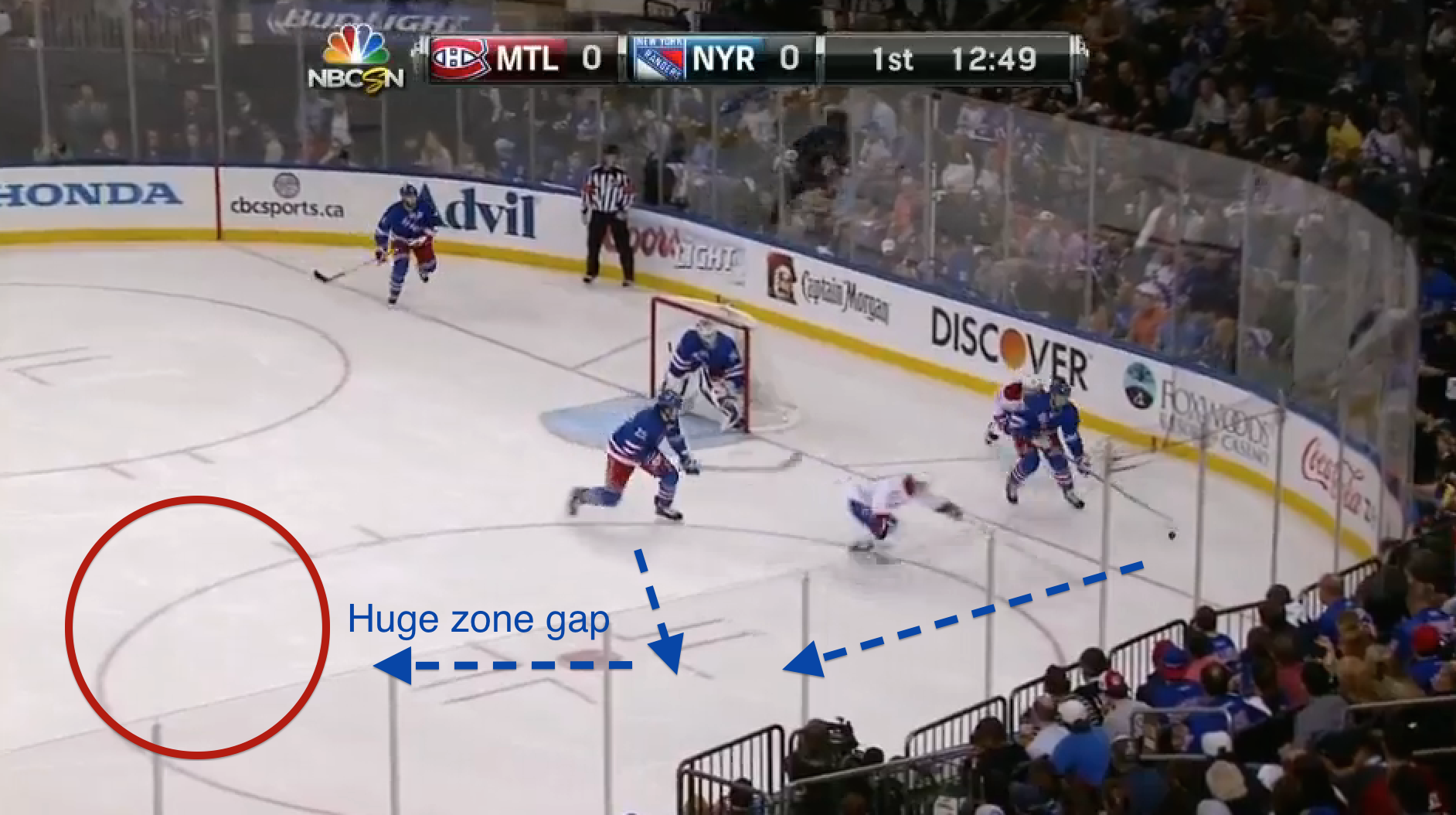 With time and space for Boyle to skate into, three Canadiens are in the frame, while Subban is frantically trying to recover to catch Carl Hagelin, who's streaking up ice. But the key here is the space Boyle has to operate. 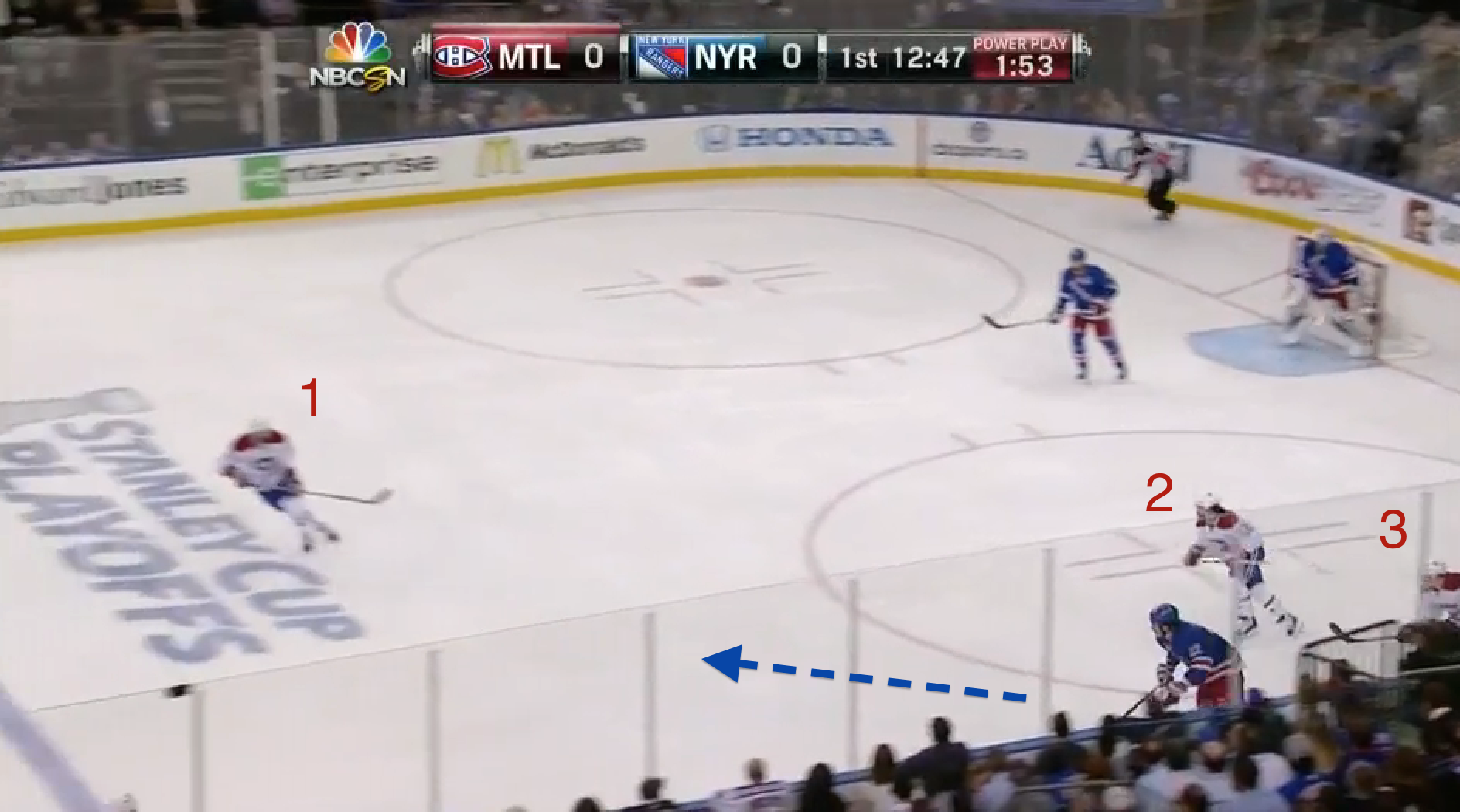 Subban had come down from his point spot to make a play on the puck. Max Pacioretty rotated toward the point to occupy the area left by Subban, but he loses Hagelin, who is off to the races. 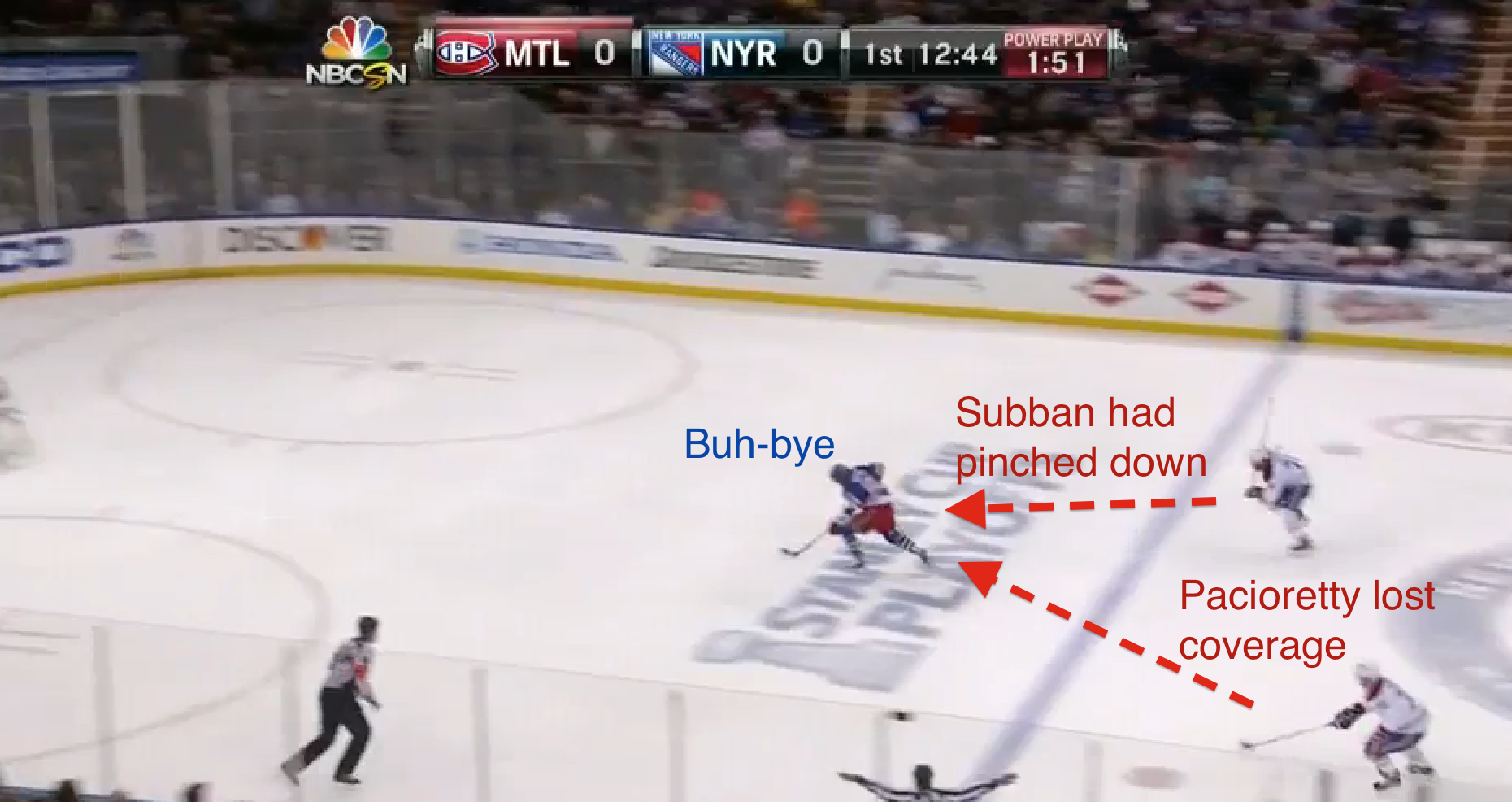 Mainly what Vigneault was able to identify was when Montreal worked the puck below the goal line, Michel Therrien was sending three skaters in to get that puck back to the point. That's leaving a lot of space from the icing line to blue line, and while those short passes, especially toward center ice, are viewed as dangerous in a team's defensive zone, there wasn't too much danger for New York. On these two plays, Marc Staal has his head up, and easily finds a teammate to clear the puck.

Staal appears to be walled off, as three Canadiens have him surrounded. But Boyle and Staal both see an area where the defenseman can move the puck, Boyle can receive it, and have plenty of time to move it. 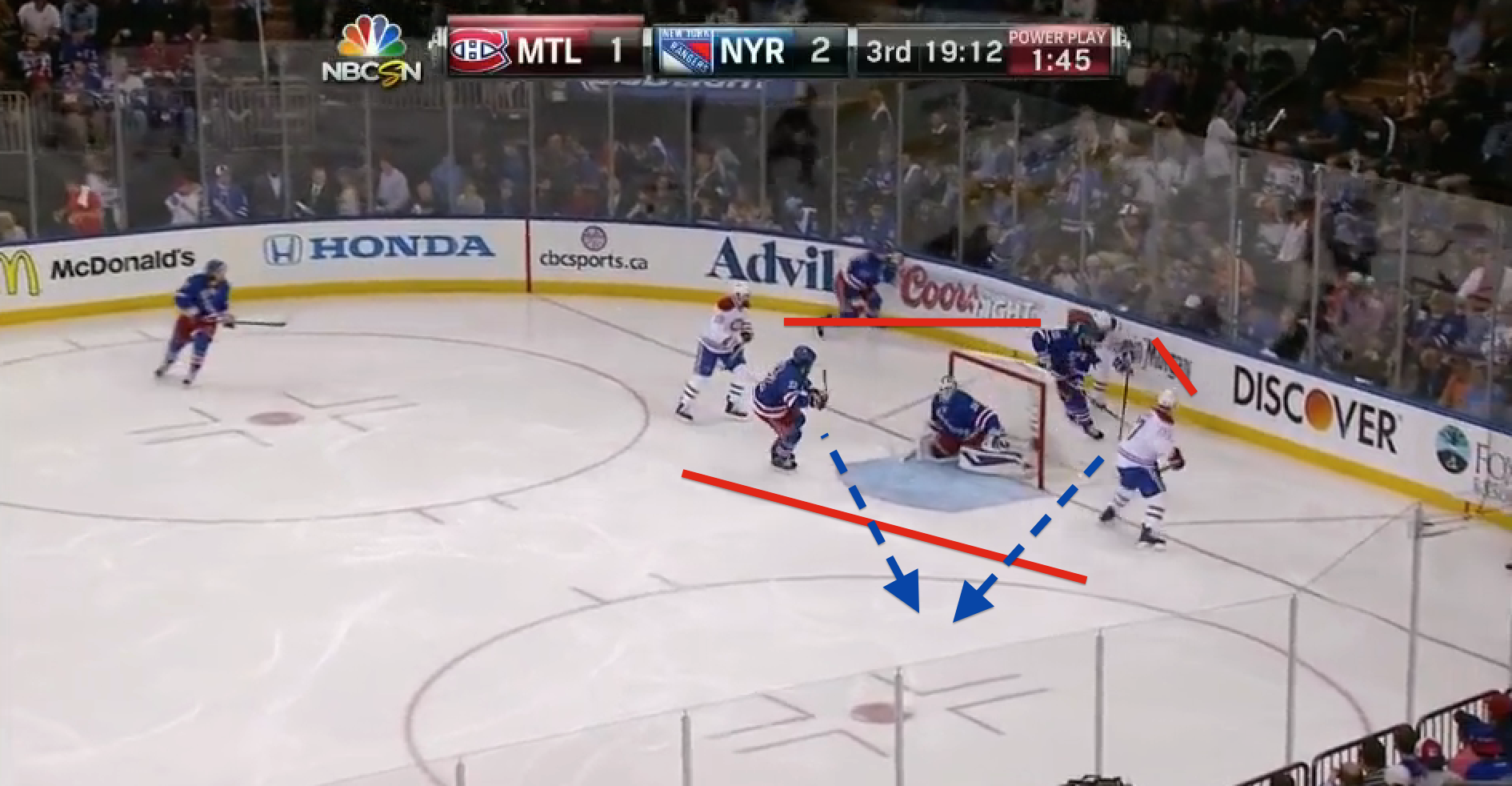 From there, it's an easy clear for Boyle, who again, wouldn't have met a Canadien player until the blue line. 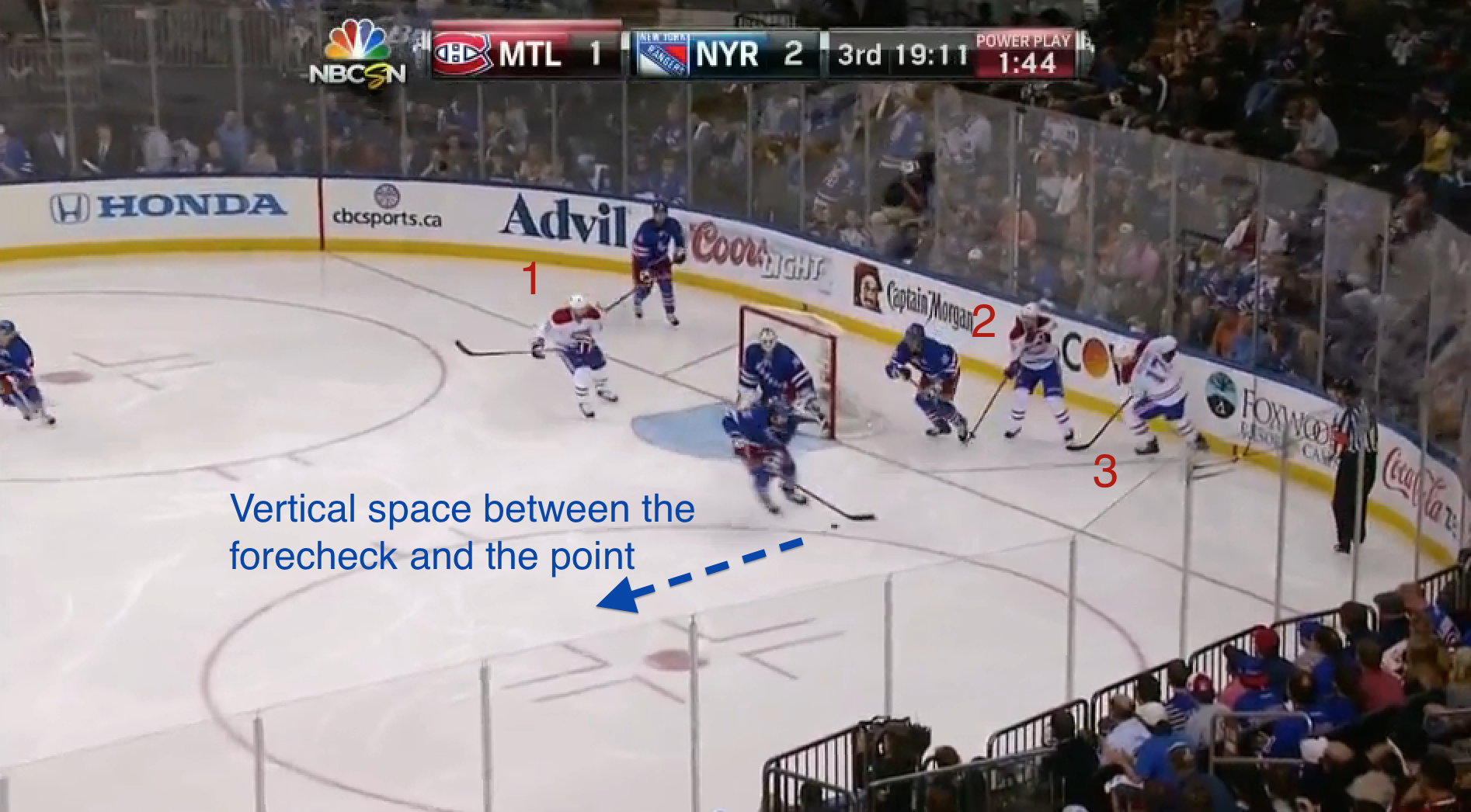 On this next play, its Staal and Mats Zuccarello who are easily able to nullify a Canadiens dump-in attempt.

Where Daniel Briere is positioned along the boards, he can stop or slow down a Staal clearing attempt. But the Rangers were ready for this, and Zuccarello is sitting wide-open in the middle of the ice, as the three forechecking Canadiens aren't protecting against that pass. 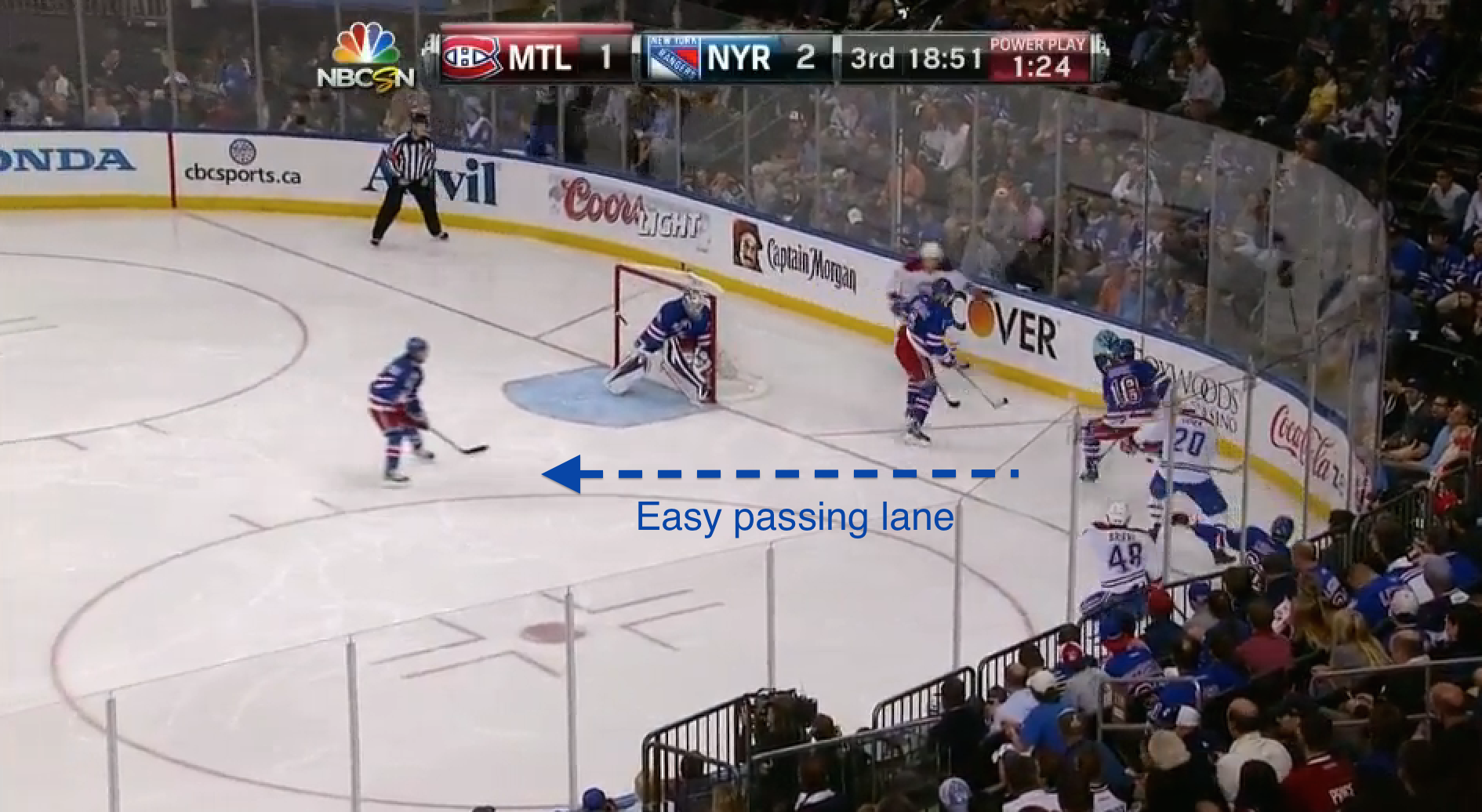 And from there, again, with three Canadiens pinned so deep, and such a large gap to their second wave of skaters, Zuccarello can turn and wheel rather easily, as the Rangers force Montreal to go 200 feet again. 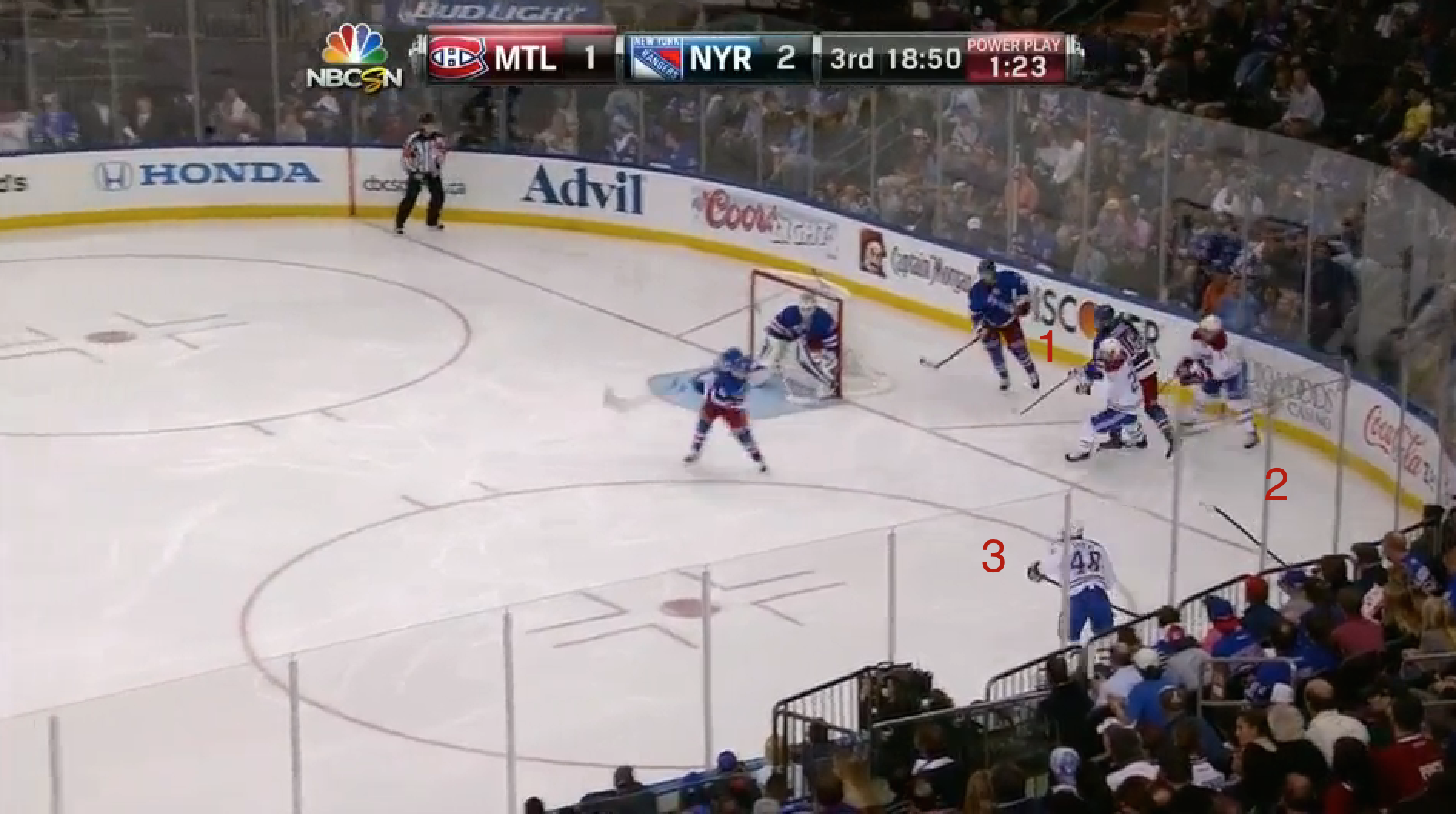 What was most interesting about Vigneault's adjustment is that Therrien seemingly had no answer for it. On that last Staal play, had Briere positioned himself to take that Zuccarello pass away, it would have forced Staal to try to clear the puck up the boards. And with that much space and Andrei Markov camped at the blue line, why not force Staal into making that play? Either way, while those passes near the crease are normally frowned upon in the defensive zone, the Rangers turned them into high percentage plays.

What will show up on the stat sheet is the Rangers penalty kill was successful 21 out of 23 times, against Montreal or 91 percent. That's an incredibly high rate, especially against a team that had shown how lethal its power play could be against Boston. But nothing happened by accident for the Rangers, as Vigneault and his staff devised a plan specifically to frustrate a key element to Montreal's power play blueprint.