Deployment of the Ranger defencemen

A statistical analysis of how the Ranger defencemen perform against different levels of competition, and a suggestion of how they should be deployed in the Stanley Cup Final against the Los Angeles Kings.

Share All sharing options for: Deployment of the Ranger defencemen

The long break between game 6 of the Eastern Conference Final and game 1 of the Stanley Cup Final allowed me to take a step back and look at the bigger picture of the team. Discussions of how the team will transform over the upcoming summer flowed over the Internet, and there seemed to form an unfortunate consensus that Anton Strålman would be too expensive to keep and let go. As someone who considers him one of the most important pieces on the team this was worrying, but my arguments that he was at least as valuable as Girardi was usually met with some form of the "Strålman cannot handle 1st pairing competition, Girardi can"-argument. I’ve always bought that argument at face value, after all apart from a stretch during the 2012-13 season and playoffs where the McDonagh-Strålman pairing was allowed to dominate the league McDonagh-Girardi has been handling the toughest assignments and the Rangers have been very successful over this period. However the vast difference in territorial play still worried me, especially after this season where Staal-Strålman faced almost as tough assignments as the top pairing, yet came out a long way ahead in possession.

But their difference in deployment got me thinking: What if Strålman is just better at exploiting the softer matchups that all defencemen face, and Girardi is actually performing better when they are facing tough competition? That’s something that I can actually research thanks to Hockey Analysis’ WOWY charts.

My findings were surprising and illuminating, and they presented which situations the different defencemen performed at their best, and their worst.

I created different brackets based on the opposing players’ 5v5 CF% adjusted for zone starts (only the minutes away from the player in question) to see how the defencemen performed against each one:

I then calculated how the defencemen performed (CD20 vs Exp, shot attempt differential per 20 minutes versus expectation) versus the different brackets according to my usual formula (explained in this article). I had to make the assumption that the players played with their average quality of teammates against all brackets with the available data.

The chosen sample was the past three regular seasons, as that is the period of time over which our entire top-4 has been playing for the Rangers. By splitting the sample into brackets small samples could appear, so brackets where a player spent less than 200 minutes in were thrown out.

First, let’s take a look at the raw zone adjusted CF% of the different defencemen: 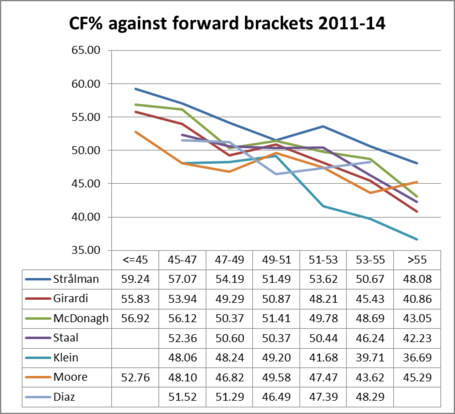 That didn’t exactly match my expectations. Strålman has by far been the most effective against top competition, while Girardi has been the worst among our top-4. Klein’s numbers are downright scary, but he spent most of that time on a terrible possession team in Nashville so let’s make the adjustments for quality of teammates and competition to get a fairer picture: 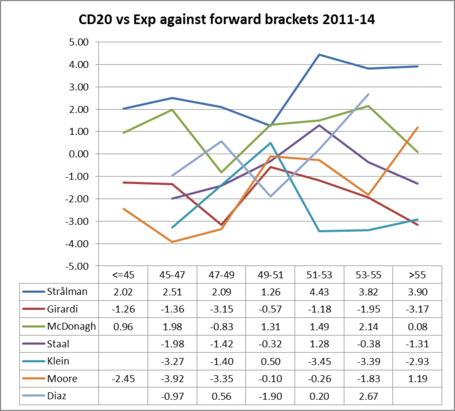 This only magnified how well Strålman performs against difficult competition, as he exceeds expectation a lot more on those situations compared to the softer matchups. McDonagh almost matches him against below average competition, but he blows everyone out of the water against top competition. Apart from an anomaly in the 47-49 bracket, Girardi is not too bad against most brackets, but can’t seem to handle the more difficult matchups at all. McDonagh’s numbers are amazingly consistent, his trendline lies absolutely flat just above the 1.00 mark, while Staal’s curve is what you expect of him: not the best at exploiting easy matchups, but better against top competition. Klein’s numbers improve compared to his raw CF%, but they are still pretty terrible. Those thinking he can replace Strålman in the top-4 should think again as he is a nightmare against above average competition. Moore does surprisingly well against tough competition, but can’t take advantage of his easier matchups at all.

But matching up against the opposition’s forwards isn’t the only aspect of defenceman deployment, matching up with the correct forwards from the same team is important as well. Which defencemen are best at supporting the top lines, and which are better suited to the grinders? 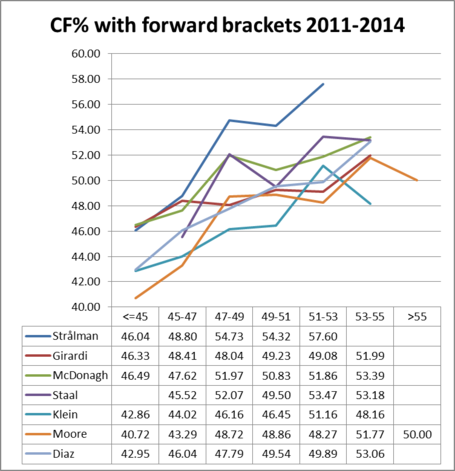 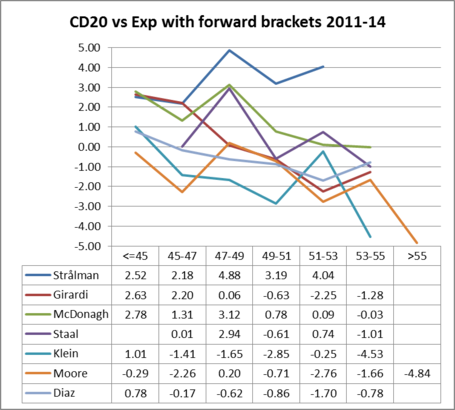 Once again Strålman seems to perform better with better players on the ice. Girardi on the other hand really excels with the poor possession players, being the best on the team in that situation. McDonagh and Staal are once again pretty versatile and perform well in most situations. Apart from an anomaly in the 51-53% category, Klein’s curve looks like Girardi’s except worse – he too seems to perform best with the grinders.

Strålman definitely doesn’t need to be sheltered, instead the evidence seems to point to the contrary. He does well in every situation, but especially so when the best players are on the ice. I still wouldn’t put him above McDonagh as he hasn’t had to carry Girardi for 76% of his 5v5 minutes – McDonagh has performed exceptionally well away from Girardi.

Girardi seems to be the inverse of Strålman – performing at his best when the plugs and grinders are on the ice. That would make him a great fit on a grinding team (like the 10-11 and 11-12 Rangers, the seasons where he built his reputation as a top pairing defenceman), but on a team that wants to carry play and dominate possession his ideal spot would probably be on the bottom pairing. Klein looks a lot like a lesser version of Girardi and not at all like a potential top-4 defenceman.

McDonagh’s and Staal's numbers were pretty much what I expected, versatile players that perform at a consistent level in every situation.

John Moore’s chart is worrying. He isn’t good enough against tough competition to warrant an expanded role, but he is terrible at taking advantage of the easy matchups you get on a third pairing. Diaz looks more capable in that role (and overall), but being right handed he always ends up being the odd man out.

What does this mean for deployment? Against a team as deep as the Kings, loading up with McDonagh-Strålman doesn’t seem like the best idea. I think that pairing would excel, just like they have in the past (see the end of this article), but I fear that Staal-Girardi may not fare very well. So spreading the wealth as Vigneault currently does is probably the way to go, especially considering that the current pairings are the ones who got us to the final in the first place. However, I would give the more difficult matchups to Staal-Strålman instead of McDonagh-Girardi. It might not "feel" right, but the evidence clearly points in that direction.

For the third pairing I think Diaz should keep his spot in the lineup over Moore if he proves he can handle the left side. The pairing should continue to be sheltered, due to Klein’s struggles against tough competition.