2014 Free Agency: What do the Rangers really have on defence?

An extensive analysis of the Rangers' defensive corps, and some potential UFA targets, ahead of July 1st 2014.

Share All sharing options for: 2014 Free Agency: What do the Rangers really have on defence?

With the potential loss of superstar defenceman Anton Strålman and few, but intriguing, defencemen available in the 2014 UFA class I thought it would be prudent to review the Rangers defence and the available options to see whether some moves should be in order.

First up, we will review the defencemen individually to identify their strengths and weaknesses, and after that is done we can look at them as a unit to see where there is excess and where there is a deficit.

I have developed a model where a player’s performance over the past three regular seasons (2011-14) is compared to his peers (either fellow forwards or defencemen) in six different categories and his rank on a scale from 0-100% is displayed in a radar graph. Here is a table with the chosen measures: 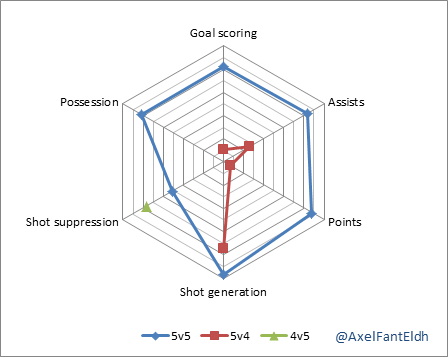 That is exactly what you want to see from your #1 defenceman: well-rounded and elite in almost every 5v5 category. His merely average shot suppression might be a consequence of playing so much with Girardi (though the numbers are adjusted for teammates), but considering his shot generation and offensive output it might just be a consequence of an offensive mindset. We are constantly told of McDonagh’s defensive prowess, but the numbers suggest that he is in fact more of an offensive defenceman.

Despite his offensive chops 5v5, he isn’t really a very effective quarterback on the man advantage. He generates shots, but doesn’t put up points at a good rate compared to other regular 5v4 defencemen.

On the penalty kill he is a lot more effective at suppressing shots than 5v5, which suggests that he has the ability to do it very well when it is his primary focus – another indicator of an offensive bias 5v5.

Another player with a surprising offensive bias is… 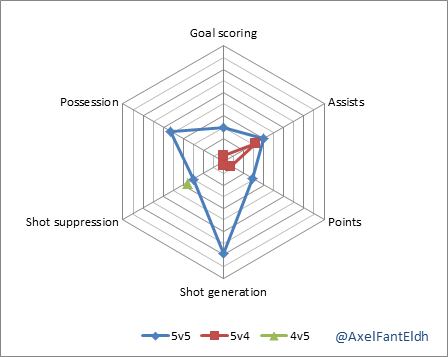 Girardi, who gets a lot of flak for his lack of a possession game, is actually ever so slightly above average in that category (though he is trending downwards). Even more surprising perhaps is that he is doing this through shot generation rather than suppression. Just like with McDonagh, Girardi is likely picking up some residual effects from his partner but we can’t rule out that Girardi might in fact be decently effective at generating offensive pressure from the back end – he does have a penchant for pinching in.

On the defensive side it looks a lot worse though, Girardi is below average at preventing shots against both 5v5 and 4v5. The less said about his performance 5v4 the better, as the numbers are dreadful.

Speaking of defencemen being carried by their partners, let’s move on to… 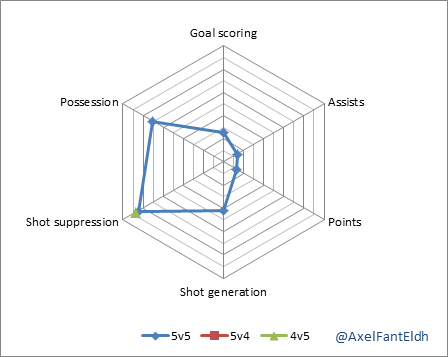 The epitome of a defensive defenceman: great shot suppression (5v5 and 4v5), good possession, slightly below average shot generation, and no point scoring ability whatsoever. There might be some residual effects from his partner though, so the generation, suppression, and possession numbers might be on the high side.

Staal is what he is: a solid, steady, unspectacular defenceman. I do fear however that he is rated higher around the league than he is actually worth – which might lead to a way too expensive extension.

Why am I so certain Staal is the one being carried by his partner, well let me tell you a little about… 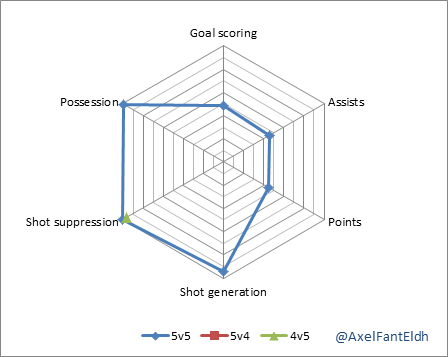 I’ve written so much about Strålman that I‘ve grown weary of it, so I’ll keep this short. The chart clearly shows that he is in the absolute elite of the league with regard to shot generation, suppression, and possession. His scoring numbers are just slightly below average, which is actually more than I expected. All-in-all a fantastic defenceman that you can throw into any situation and he will excel. In fact: the better the competition, the better he performs.

Our next subject does on the other hand needs some heavy sheltering, it’s time for… 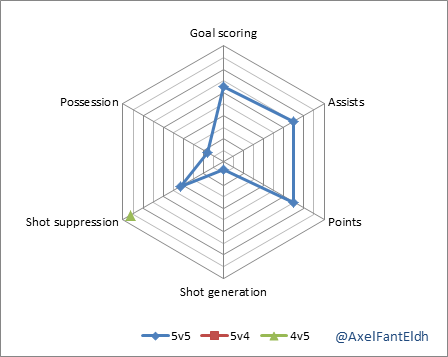 This might come as a surpise to some: Kevin Klein is actually the 2nd best defenceman on the rangers with regard to scoring points 5v5. This is especially surprising considering that he is one of the worst defencemen in the league at generating shots. The offensive numbers do look slightly unsustainable in that context. While Klein is a pretty dreadful 5v5 defenceman, he is actually one of the best on the PK. I’m not sure that is worth $2.9M/year, but he does have his strengths.

I’m not sure I can say the same about… 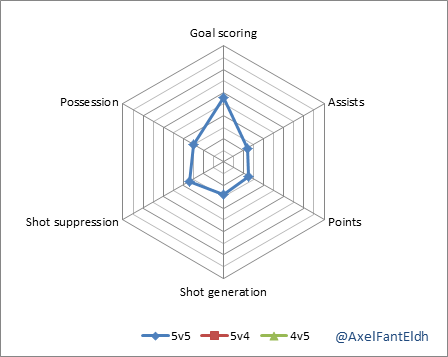 In fairness, John Moore is a pretty well-rounded defenceman – he isn’t terrible at anything. Unfortunately, he is pretty bad at almost everything. He does have a decent shot which helps him crawl just above 50% in 5v5 goal scoring, but apart from that there isn’t much to be happy with here. 6th-7th defenceman at best.

So how does he compare to our actual 7th defenceman… 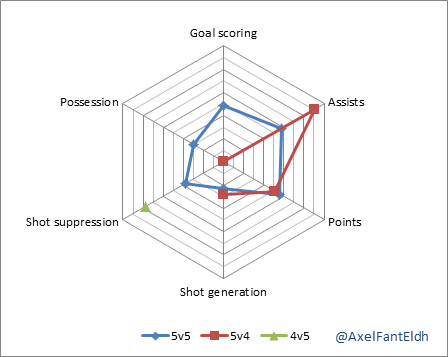 While Diaz isn’t necessarily good, he’s at least better than Moore. He has a similar possession game to Moore while putting up more points, he is decent enough on the PP, and is actually good on the PK. On the whole I think I prefer Diaz in our bottom triad of Klein, Moore, and Diaz, but I’m not very enthusiastic about any of them. Diaz has shown progression in his possession game, so there might be some upside there.

When evaluating the 5v5 and 5v4 pairings I’ve averaged the rank of the partners in each category. 5v4 evaluation is individual as the Rangers aren’t using defensive pairings there.

Overall the defence is good 5v5, though the bottom pairing is lacking, but there is a severe lack of a legitimate quarterback for the power play. This also illuminates that the McDonagh-Girardi pairing isn’t a very good fit, they generate shots but concede a lot. In my opinion Girardi should have been paired with the better shot suppressor in Staal and McDonagh and Strålman should’ve been allowed to roam free. Girardi, who also should be taken off the PK in favour of Klein, who is an elite shot suppressor in that situation.

If we lose Strålman, or want to upgrade on someone else in the defence there are some really attractive options in UFA. Matt Niskanen is likely to be too expensive and is therefore ignored, so let’s start with the other big name… 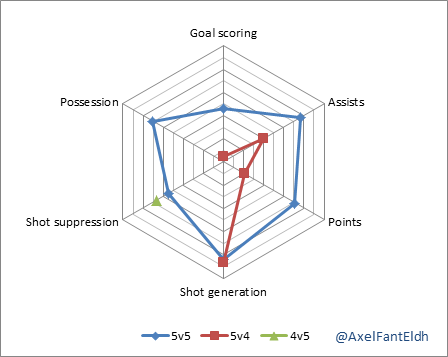 Ehrhoff looks a lot like a lesser version of McDonagh. Primarily a shot generator, 5v5 as well as 5v4, decent point scorer 5v5 but inefficient 5v4, better suppressor 4v5 than 5v5, and above average in every category. Coming off of a buyout Ehrhoff might come cheap, which makes him very attractive considering that he is a 1st pairing defenceman. 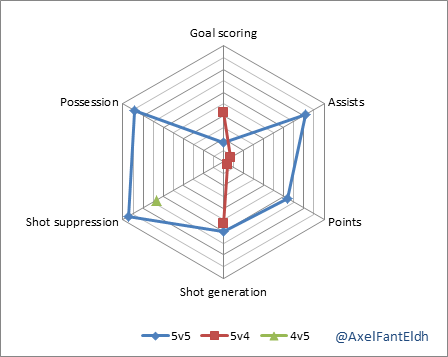 Gilbert was bought out of his contract last summer by Minnesota and carries a reputation of being a bit of a defensive liability – which is funny considering that he is one of the best shot suppressors in the league. But I guess if you put up points and isn’t physical you have to be a defensive liability in some circles. Gilbert struggles to score goals but is a good producer 5v5, he is inefficient on the power play though and his high point totals earlier in his career were products of ice time rather than efficiency.

Speaking of inefficient scorers, there is an intriguing option available from the Devils in… 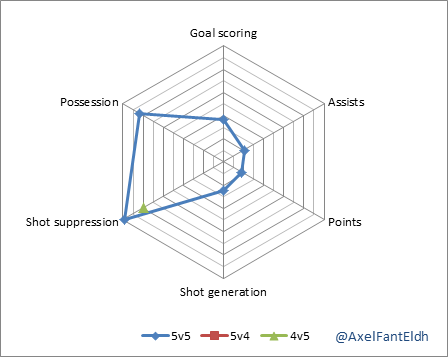 Fayne is an elite shot suppressor and not much else. He won’t bring you points or offence, but he sure can shut your opponents down. I am always a bit wary of signing ex-Devils though as you never know how they will do outside of their suffocating system – no team suppresses shots like the Devils. Though it is impressive that Fayne can get elite suppression numbers considering that they are adjusted for teammates.

Here is a visual comparison with our 2013-14 numbers and how the different Strålman-replacements would affect our defence. My ideal fantasy scenario is also included for comparison. 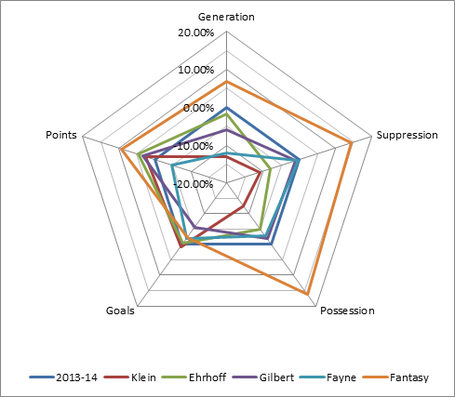 As we can see, Strålman is better than any of the UFA options and should therefore be kept. I’m still holding out hope that he will be retained, but that is unfortunately not a very realistic stance.

The chart clearly demonstrates that bumping up Klein to the 2nd pairing is by far the worst option. Gilbert is a better replacement than Ehrhoff from a possession standpoint as we need suppression more than generation. I think the difference in 5v5 effect is big enough to offset Ehrhoff’s 5v4 superiority, as he isn’t far enough ahead of McDonagh in that department. Fayne is a clear step below the other two UFA’s as we just lose too much offence with him on our 2nd pairing. Though if he could be gotten cheaply, Fayne would be an excellent replacement for any of our bottom three defencemen – I’d definitely prefer him over Klein in the RD3 role.

Then what is my ideal fantasy scenario? Girardi, Staal and Klein are traded for picks and Strålman, Ehrhoff, Gilbert, and Fayne are all signed. Girardi/Staal vs Ehrhoff/Gilbert should be a wash in salary, the latter pair might even come cheaper. I think it is realistic from a cap perspective, but there is no way the front office revamps our defence in such a drastic way.

Here are their ranks as a unit in their full glory:

Another possibility is to try out Allen over Moore in the LD3 role. Having such a steady partner as Fayne should help Allen ease into the NHL game.

Base stats are as usual from stats.hockeyanalysis.com, but the numbers used in the article are all calculated by me from the base stats.