New York Rangers Analysis: Without Anton Stralman, another test ahead for Marc Staal

While Dan Boyle will be a big upgrade on the Rangers power play, his addition will force Marc Staal into a bigger role.

Share All sharing options for: New York Rangers Analysis: Without Anton Stralman, another test ahead for Marc Staal

Marc Staal's progression as a pro hockey player hasn't come without its starts and stops, and it's share of downright terrible luck. Staal's introduction to injuries began when of all people, older brother Eric delivered a high hit, leading to a concussion, and a concussion problem that plagued Marc over the next two seasons.

When he finally cleared that hurdle, Staal was involved in a freak accident against the Flyers when a shot deflected off his own teammate, and up into Staal's eye, almost ending his career.

But this past season was an excellent step forward when it comes to Staal playing consistent, injury-free hockey. The 27-year-old defenseman appeared in 72 games, and was very durable on the Rangers blue line.

This upcoming season, though, will present a new set of challenges, as Staal loses defensive partner Anton Stralman, and will have to shoulder a larger load in New York's game plan.

Staal in inarguably the Rangers second-best defenseman behind Ryan McDonagh. His ability to quickly move the puck, get out in transition, and play physical, important minutes round out a pretty solid game. He's nearly always been a steady possession player (there was a down season in 2009-10, and not sparkling numbers the following year when he was injured), and especially stood out last season when skating with Stralman. Of course, Stralman drove the bus when it came to puck possession, as Staal's overall CF% was nearly eight points higher in the 944-plus minutes they were on the ice together, which constituted about 76% of Staal's play.

Dan Boyle is no slouch when it comes to puck possession consistently posting a CF% north of 50, and did the heavy lifting in his defensive pairing alongside Matt Irwin. 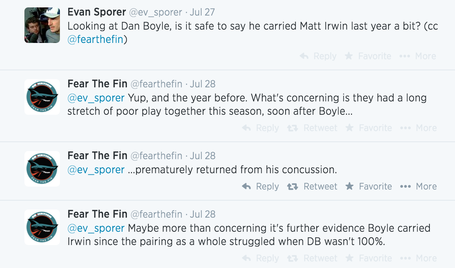 And now to the present. Boyle is not Stralman, which isn't only to say Stralman is a better defenseman, but they also both play different styles. While Staal will have to adjust to playing with a less accountable player (and don't take this as a slight on Boyle, but it's a downgrade; there's no reason to sugarcoat it), he'll also have to learn to play with a more offensively-minded player.

In Alain Vigneault's new system, defensemen are encouraged to become more involved in the rush, and chip in offensively. When the Rangers struggled mightily at the beginning of the 2013-14 season, the d-corps was also struggling to adopt this new style of play. Staal saw heavy minutes early on with Michael Del Zotto, another player who, like Staal, is capable of making the offensive play.

But once Staal was married to Stralman, it allowed him to make those vertical plays. Stralman was a safety net of sorts for Staal, and a good complement to Staal's style. While Stralman, like Staal, is very good at moving the puck, Stralman is more accountable in his own end than Boyle. And that sense of comfort and familiarity, created through repetitions skating with the same partner, will need to be rebuilt from scratch, beginning in training camp.

This isn't a doomsday by any stretch, as Boyle again is a competent possession player. Stick two of those together on a blue line, and things will likely sort themselves out.

An absolutely quintessential element to the Rangers deep playoff run last season was Vigneault's ability to deploy his second pairing in tough minutes, against top competition. In beating a team like the Penguins, you can't keep your top pairing out against both the Sidney Crosby and Evgeni Malkin lines. Playing the Kings, one pairing draws Anze Kopitar, while the other draws Jeff Carter. It turns into a numbers game.

One area that could benefit Boyle, and help him become more effective, is overall minutes played. Stralman and Boyle played nearly identical 5v5 minutes per 60 last season (Stralman played 0.2 more 5v5 minutes per 60 a night). Boyle averaged more minutes a night than any other Sharks defenseman last season, while his major power play time slanted those numbers. Boyle's 5v5 TOI/60 was only fractionally below that of teammate Justin Braun, and also right around what Marc-Edouard Vlasic played. There's no doubt his 5v5 minutes in New York will take a backseat to Staal and McDonagh, and perhaps Dan Girardi, who played significantly more 5v5 minutes than Boyle last season. Staal playing with a Boyle being asked to a bit less 5v5 could help that pairing achieve the same success as the second pairing did this past year.

So what should you get out of all of this? Boyle is a defenseman completely capable of driving possession, just not to the gargantuan levels of Stralman. And outside of that, Staal will have to adjust to a new partner with a different skill set than Stralman. And while all of that may seem daunting, the Rangers may be capable of putting Boyle in cushier 5v5 situations, at least when it comes to minutes, absent of quality of competition, an element that could balance out the scales.

All of this though starts and ends with Staal, who, when healthy, has completely validated being selected with the No. 12 overall pick in the 2005 draft. This is actually more about Staal than anything else. If his development curve is still on an upswing, than Staal should continue to play a more prominent role in the Rangers' success. And in terms of players looking to take that next big step in the 2014-15 season, Staal should certainly be considered among that group.