In Game One of the Eastern Conference Finals Chris Kreider used his blazing speed to wreak havoc on the Montreal Canadiens defense, leading to one heck of a goal

Man, August sucks, and there's nothing at all to talk about. So let's have some fun.

In case you've forgotten, this is the video breakdown where I take a video of a Rangers goal and use some internet hocus pocus to break it down all fancy like and give you, the gentle reader, a nice explanation of what happened that led to the goal. You can see the previous three entries here, here, and here. So let's have some fun.

Game One of the Eastern Conference Finals was a very odd one. First and foremost, the Rangers won a game in Montreal that Henrik Lundqvist started. That was weird enough, the Rangers went on to score seven goals in that game, chasing Carey Price (after Chris Kreider and Alexei Emelin conspired to kill Price), and even getting Rick Nash a goal in the playoffs.

One of the better moments of this game was this goal by Kreider to make a 2-1 game, at the time, a 3-1 lead for the good guys.

Only question is how the hell did Montreal lose a 6'3 220lb winger like Kreider and give him that much open ice?

That's a great question to ask, I'm so glad you did.

Let's rewind a little bit to a point where P.K. Subban and Chris Kreider raced down the boards on a zone exit almost identical to what led to the goal above.

The puck had bounced down to the opposing blue line, but even with a step on him, Subban can't effectively close off Kreider as they both streak after the puck. 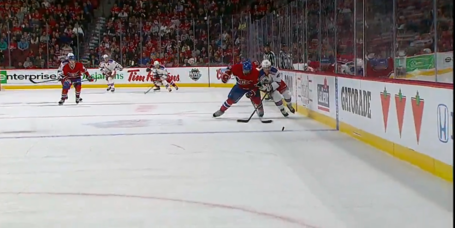 I love this shot. In it you can see how hard Subban is trying to knock Kreider off his path without taking an interference penalty as well as seeing how much room the Boxford, Ma. born winger has along the boards to beat out one of the best defensemen in hockey for the puck.

The play resulted in a shot over the glass by Mats Zuccarello, but as we'll soon see, Kreider's speed seemed to impress itself upon Alexei Emelin and that would be a very big mistake

Here, Ryan McDonagh has corralled the puck and the Rangers are look to break out of the defensive zone. You can see Kreider beginning to get the legs churning and Emelin is giving Kreider a lot of space to do so, while keeping his eyes focused on the puck. All in all the positioning isn't that bad.

This is the last time we see Kreider in the visible spectrum as he turns on the after burners and enters hyperspace as Emelin bails out on even trying to keep up with him and focuses on watching the puck as it goes up the ice, for some reason.

This is where it gets fun. As Kreider re-enters visible space, Emelin suddenly realizes that he was supposed to be covering somebody and struggles to close the gap that he created by vacating his position. Rick Nash made the excellent play to anticipate where was going to be and just threw the puck into the open ice just as Kreider skates into it and breaks in alone.

Oh Alexei Emelin, you tried so hard but that halfhearted attempt at stopping Kreider is kinda pathetic. There's no stopping the inevitable and at that range, with that release, Kreider buries the snap shot past Carey Price for the goal.

Watch the goal again. You can almost hear the after burners kick in as Kreider flies up the ice