New York Rangers Preview: Thin down the middle, Rangers hoping to get a little more out of its forwards

With largely the same group up front as last season, the Rangers are hoping their returners take a step forward this season.

Share All sharing options for: New York Rangers Preview: Thin down the middle, Rangers hoping to get a little more out of its forwards

When the puck drops on the 2014-15 season, the Rangers very much know what they have up front, and yet still, there seem to be many question marks. It's a group that's not short on talent, playmaking ability, and in some areas, continuity.

So why does it feel like there are so many questions surrounding the Rangers forward corps?

It all begins with the first line, of which the Rangers return all three players. Whether or not that trio is kept together by Alain Vigneault this season remains to be seen, but no matter where they appear on a line chart, Rick Nash, Chris Kreider, and Derek Stepan all fugre to be instrumental pieces to the Rangers attack. Nash is the centerpiece, and it can really be left at that. The dynamic power forward has been a top scorer since the Rangers acquired him prior to the 2012-13 season. The only question mark surrounding Nash has and continues to be if he can stay on the ice.

In Kreider and Stepan, the Rangers have two young forwards that continue to develop, and are playing for new deals. Kreider is entering the first year of a bridge contract, after coming off his best pro season. Kreider netted 17 goals in 66 games, while posting 0.768 g/60 at even strength. Kreider played sheltered minutes to an extent because of his weaknesses in his own zone, but if he can figure out a way to squeeze a little more time on ice nightly, should see another hike in numbers.

The player who pulls all the strings on the top line is Stepan. A 24-year-old whose game is really rounding out, Stepan recorded a career-high 40 assists and 57 points last season while he was without both Nash and Kreider for different stretches of the season. Add in Stepan's defensive accountability, and assuming Vigneault elects to keep Nash-Stepan-Kreider together, and the team will be looking for this group to lead the way.

The Rangers weapons up front don't end there. Martin St. Louis will be entering his second full season in New York, looking to continue his streak of 11 consecutive 60 point-plus seasons. Only three of those years St. Louis has come in below 70 points (and one of those was a lockout-shortened season, during with St. Louis led the league in points), as the veteran forward has been incredibly consistent over his career. Who he plays on a line with isn't as clear, but two good candidates are Mats Zuccarello and Derick Brassard. Linemates last season, Zuccarello and Brassard lose their battering mate Benoit Pouliot to free agency, and St. Louis certainly could provide the offensive dynamic Pouliot provided that line, and then some. Brassard is the owner of a new deal, coming off one of his most productive seasons as a pro. Zuccarello is another Rangers coming off a career campaign, setting highs in goals (19), assists (40), and points (59). Oh, he's playing for a new contract as well, which shouldn't be lost in all of this.

The bottom six is where the Rangers conceivably took their biggest hit this offseason, not only losing Pouliot, but also Brian Boyle, Derek Dorsett, and Daniel Carcillo. However, Glen Sather made some moves to fill those holes, and the team has some internal options as well. Lee Stempniak and Matthew Lombardi are veterans who could provide scoring to those bottom lines if called upon. Ryan Malone is more of a wild card, but the former Lightning forward who was brought in right before camp also falls into that category. J.T. Miller seems poised to finally cement his status as a full-time NHLer, while newcomer Kevin Hayes out of Boston College is another name gunning for a spot.

What Vigneault will need out of this group is defensive accountability. Bringing back Dominic Moore certainly helps in that regard, while shuffling Carl Hagelin into that mix would help as well. The question surrounding Miller has always been his two-way prowess, while Hayes is steady in his own end, and Stempniak can be deployed in defensive situations.

Another interesting thing to watch out of the Rangers forwards is how they do in year two under Vigneault. The system the former Canucks coach installed in New York was a complete 180 from what John Tortorella was preaching during tenure. In that regard, there's significantly more continuity from the holdovers than what the Rangers faced when they entered their first season with Vigneault.

We're all definitely accustomed to seeing a group of Rangers forwards establish possession in the offensive zone, grind the opposition through a low-to-high cycle, and generate chances that way. But with Vigneault comes a new wrinkle to finding quality scoring opportunities: The transition game. And that's what we take a look at in this preview breakdown.

A crucial component to part of what Vigneault added to the Rangers gameplan was how defensemen operate and factor into the offense. Puck carriers and movers became paramount pieces of the puzzle. In this wrinkle, which comes on the power play (but works just as well at evens), a Rangers defenseman makes up space in the neutral zone, and the creates a scoring chance out of transition.

A Michael Del Zotto sighting? The former Rangers defenseman starts this play out by collecting the puck in his own end. Never accused of being fleet of foot, Del Zotto begins this sequence by aggressively skating the puck just short of his own blue line. With his head up, he can see his teammates movements throughout the neutral zone. The play here is very simple: go against the grain, and send the puck to the weak side, where the opposing team (in this case Chicago) os lacking skaters. Del Zotto hits Zuccarello in stride, and the Ranger forward generates a good opportunity off the rush, and one he turns into a goal.

The biggest advantage to a stretch pass is its ability to force the defense to reposition. By dramatically altering the geometry of a player, it forces defenders to make quick spacial changes. And with that comes wrinkle number two, in which the Rangers complete a stretch pass, followed by another quick pass. The idea is simple: change the spacing of a play by completing one really long pass, and then quickly move the puck again, completely befuddling the defense. This is actually a play the Rangers used under Tortorella, but really perfected under their new coach.

No better a player on the roster to orchestrate this action than Ryan McDonagh. As he gains composure behind the net, Stepan and Nash are finding their places up ice. Stepan is a stationary target, while Nash gains steam and needs to be on the move. 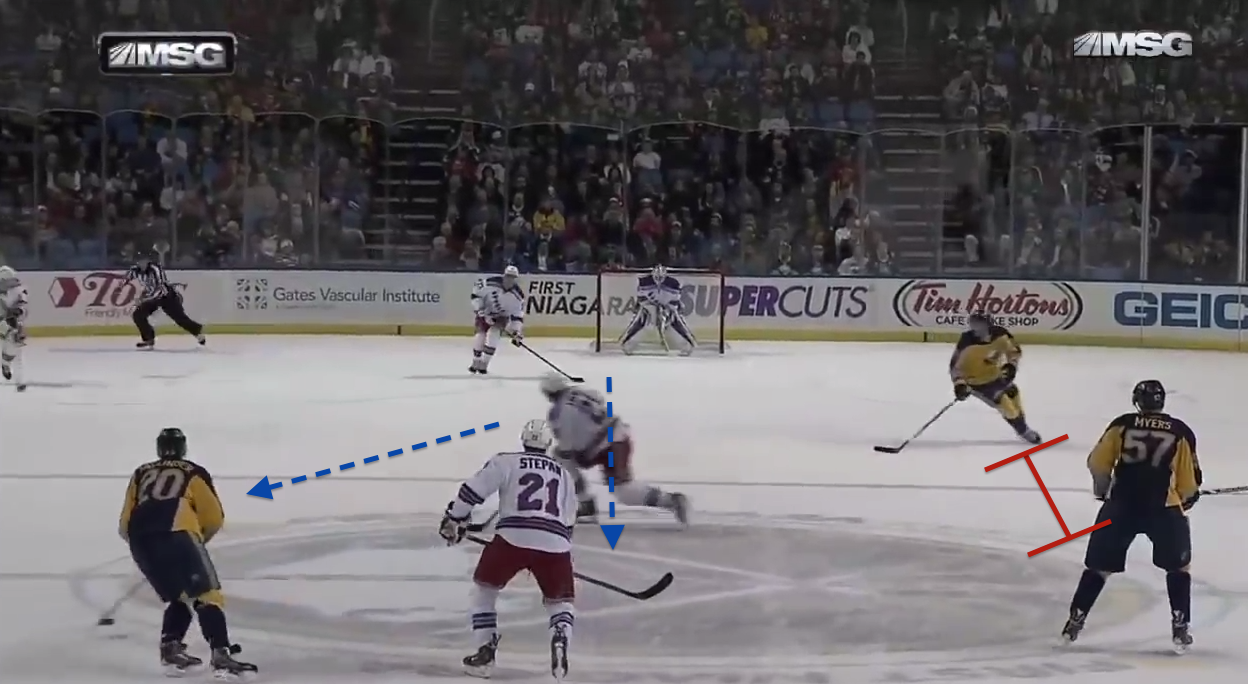 By forcing the effort, and moving quickly, the Rangers create gaps in the defense. On this goal, Stepan exploits a gap between Tyler Myers and Drew Stafford. Stepan puts the puck in an area, Nash skates into it, and a play that began with McDonagh going behind his own goal to collect the puck turns into a score at the other end. 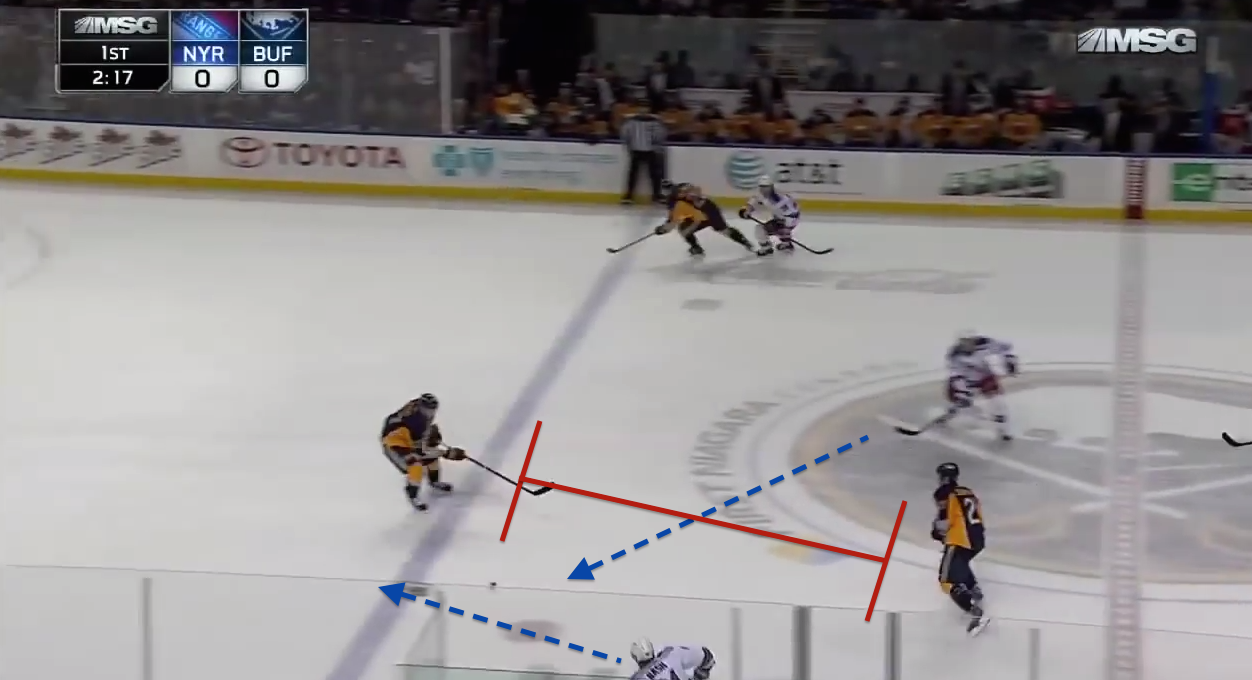 Plays are generally designed so they can be used by any number of combinations of players, but with this next one comes something pretty much drawn up for Kreider. At worst, this play can end in a turnover or an icing. But in many cases, Kreider uses his speed to beat a defender and create a chance. This isn't that complex a play, and can be born out of virtually nothing.

Stepan has an inkling Kreider can be sprung on a break, and just throws the puck into an area. This is also kind of a timing play. Think about when a quarterback throws a wide receiver a ball before he makes a break in his route. Stepan makes this pass, and Kreider doesn't see the puck until he needs to. He's able to locate it in time to corral it, but Stepan makes the play at the appropriate time. 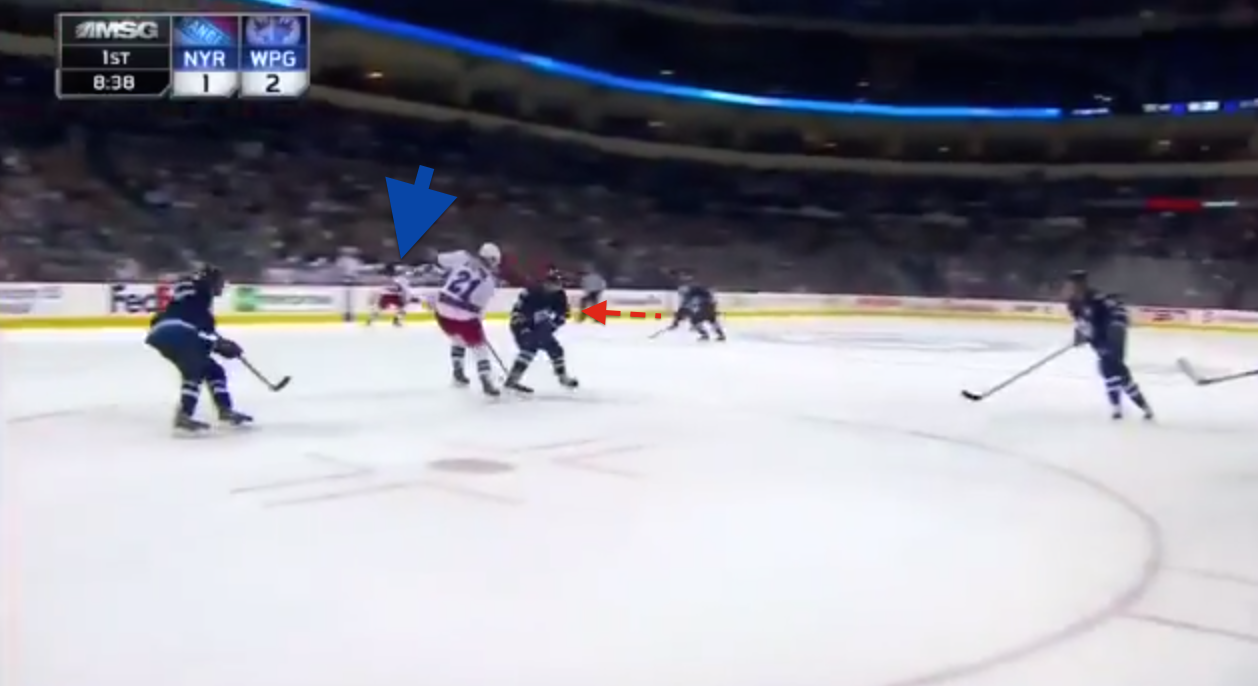 Again, Kreider simply needs to find the puck. Because Stepan attempts this so early, Zach Bogosian has no chance to win this race, and Kreider is put in an excellent position to make a play. 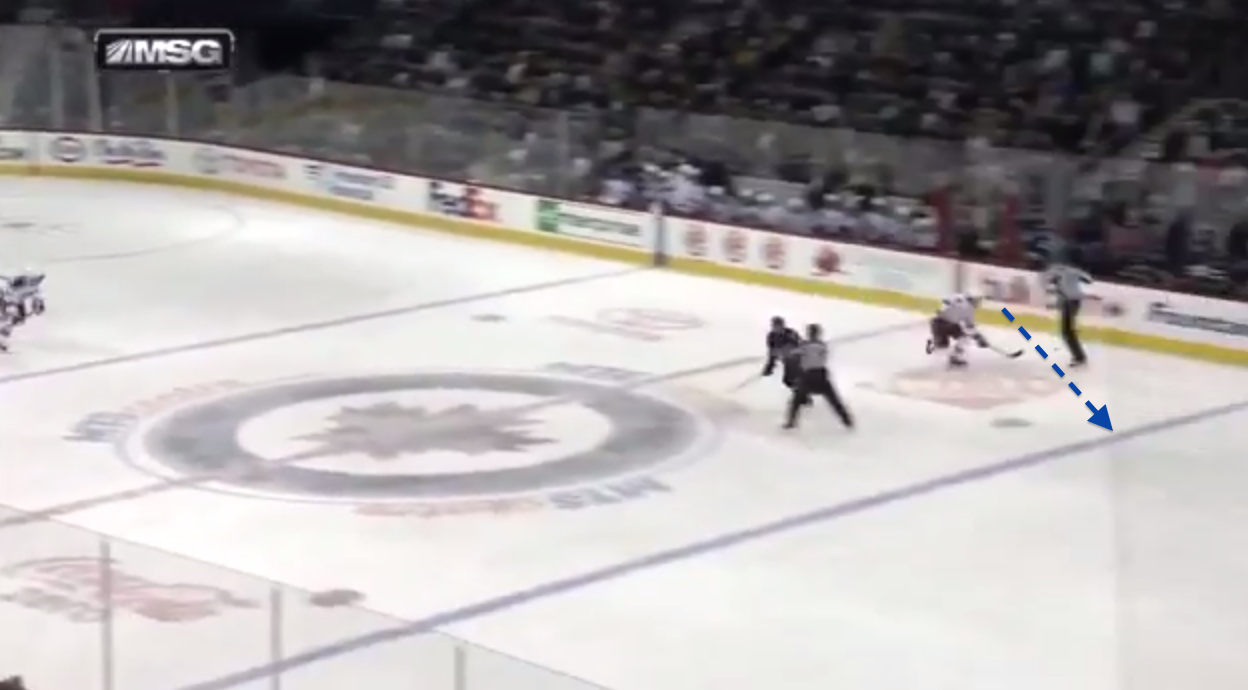