One of the area's Henrik Lundqvist has improved in the most since debuting in the NHL is his puck handling.

Since making his NHL debut in 2005, Henrik Lundqvist has improved many aspects of his game, vaulting himself into the elite goalies of his generation. But Lundqvist has developed in no area of his game more—and mostly because he simply had the most room to grow there—than his puck handling.

As a rookie, and in his first few seasons in the league, Lundqvist going out to play the puck was an adventure. Through a combination of a lack of confidence, and lack of ability, Lundqvist was shaky at making plays, and it hurt the Rangers in terms of puck retrieval in their own end.

But Lundqvist worked every offseason at improving in this area of his game, and that practice has certainly manifested itself on the ice. Last season, the nine-year pro posted four assists, matching a career high. If we're getting technical, Lundqvist did it in fewer appearances this year than when he previously set that mark (63 games this time around versus 68 games in 2010-2011), meaning he posted a hire PPG (we jest).

Most importantly, this is an area that Lundqvist now not only meets the bare minimum in, but also can contribute with. Case and point, November 21 of this past season against the Dallas Stars.

Whenever Lundqvist faced Martin Brodeur, of which there were many battles, the former always said how his New Jersey rival brought out the best in him. Maybe that's why Lundqvist got fed up with his horrid puck handling abilities, and turned them into an asset. On this goal, Lundqvist gets a secondary assist, but minus the sweet move to finish off the play by Rick Nash, Lundqvist is the second-most integral part to this sequence.

This play starts out with a Stars clear. Leading up the Dallas reclaiming possession, the Rangers had the Stars penalty killers hemmed in their zone. When a team finally gets the puck past its blue line after half a minute or so of hectic killing, it leads to a wholesale change. All four Stars go to the bench, but the clear goes straight to Lundqvist, who settles it rather easily, and makes a quick outlet pass with his head up. This is a play Lundqvist can't make if his eyes are in his skates, and when a goalie doesn't have confidence in his ability to move the puck that's generally where his head is focused. But Lundqvist is upright, where he can get enough behind the puck to lift and fire it through the neutral zone. 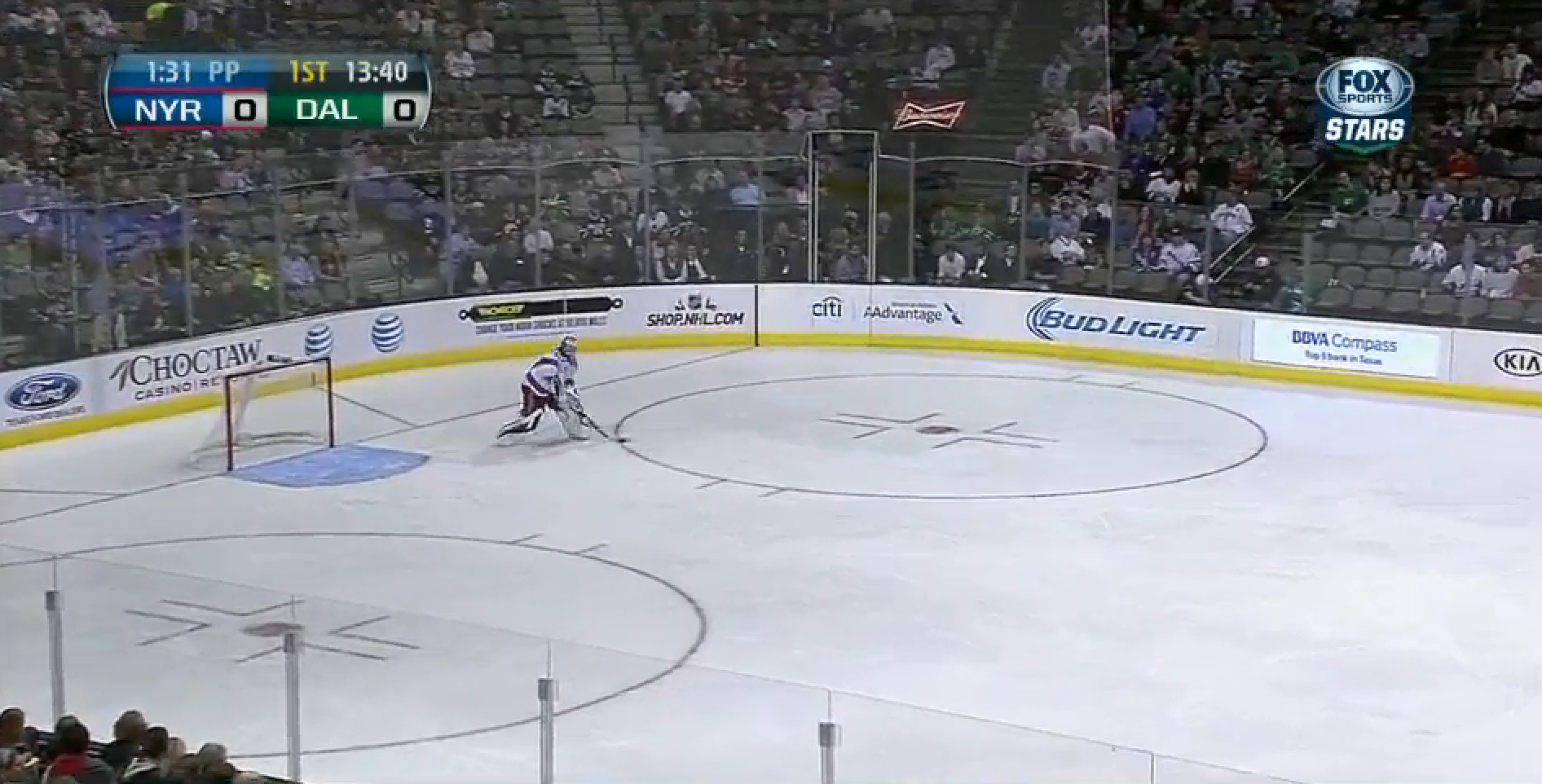 Remember that hole bit about getting enough behind his pass? As four new Stars come out for the penalty kill, Lundqvist's pass beats two of them. It's also a perfectly placed, perfectly weighted feed that wasn't bouncing and lands right on Ryan Callahan's tape, which allows him to pivot and find Nash. 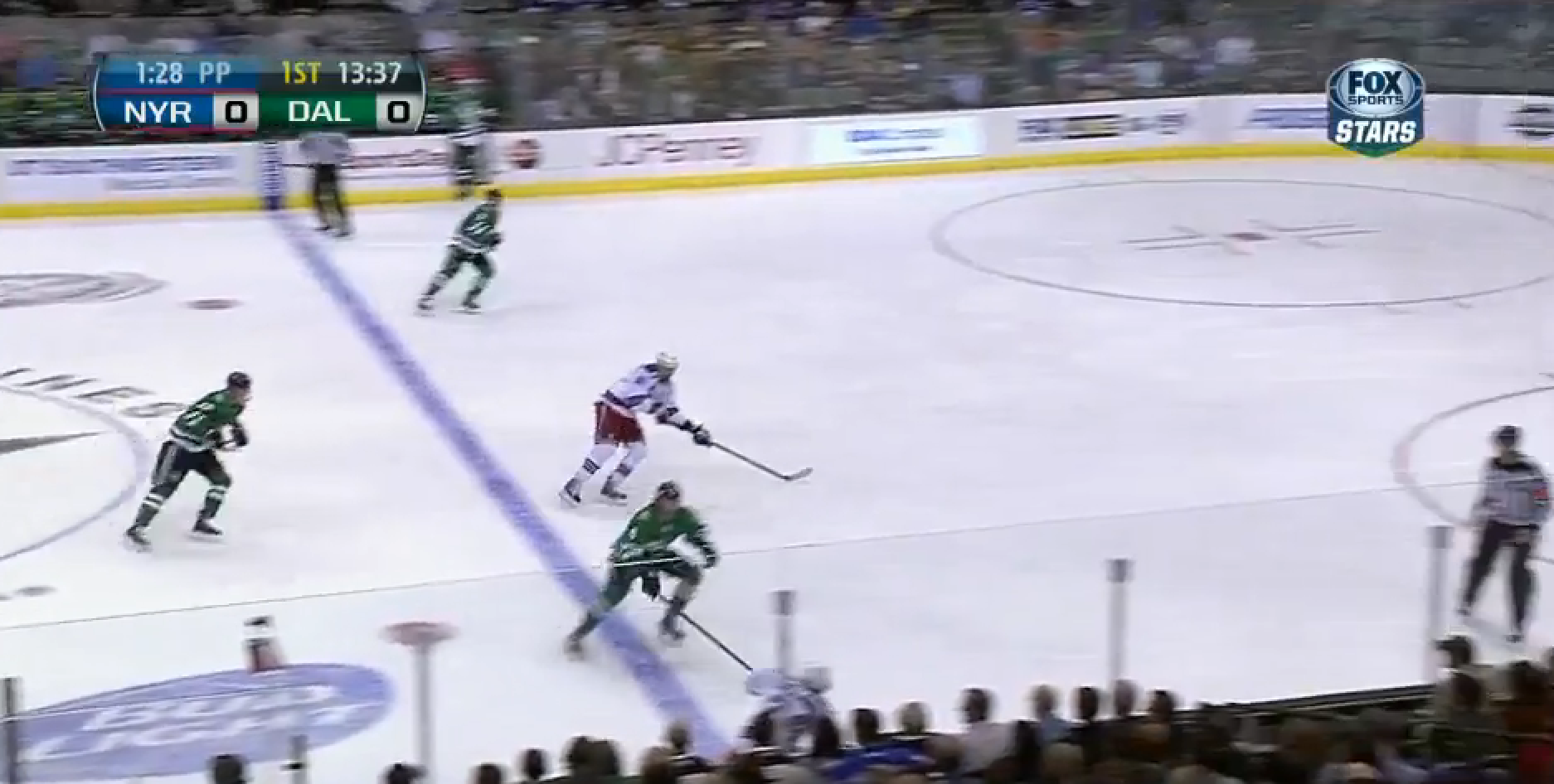 And the rest is easy for Nash, who strides toward the net with two steps on the defense, and does Rick Nash things.

Again, that stretch pass is impossible to execute unless Lundqvist can stand upright with the puck with good posture so he can get his whole body behind the rubber. Where this improved play is most useful however isn't in how it effects the Rangers offense, but the relief it provides in their own end. In this game late in the season in Ottawa, Lundqvist makes what is ostensibly a very simple play, but one he couldn't make a few years ago.

Ottawa dumps the puck in deep, a poor strategy, but the ineffectiveness of which can be neutralized with a well-placed dump in, and a poor puck handling goalie. It wasn't clear if the puck would make it to the trapezoid, so Lundqvist had to wait it out, and then make a move at the last second. 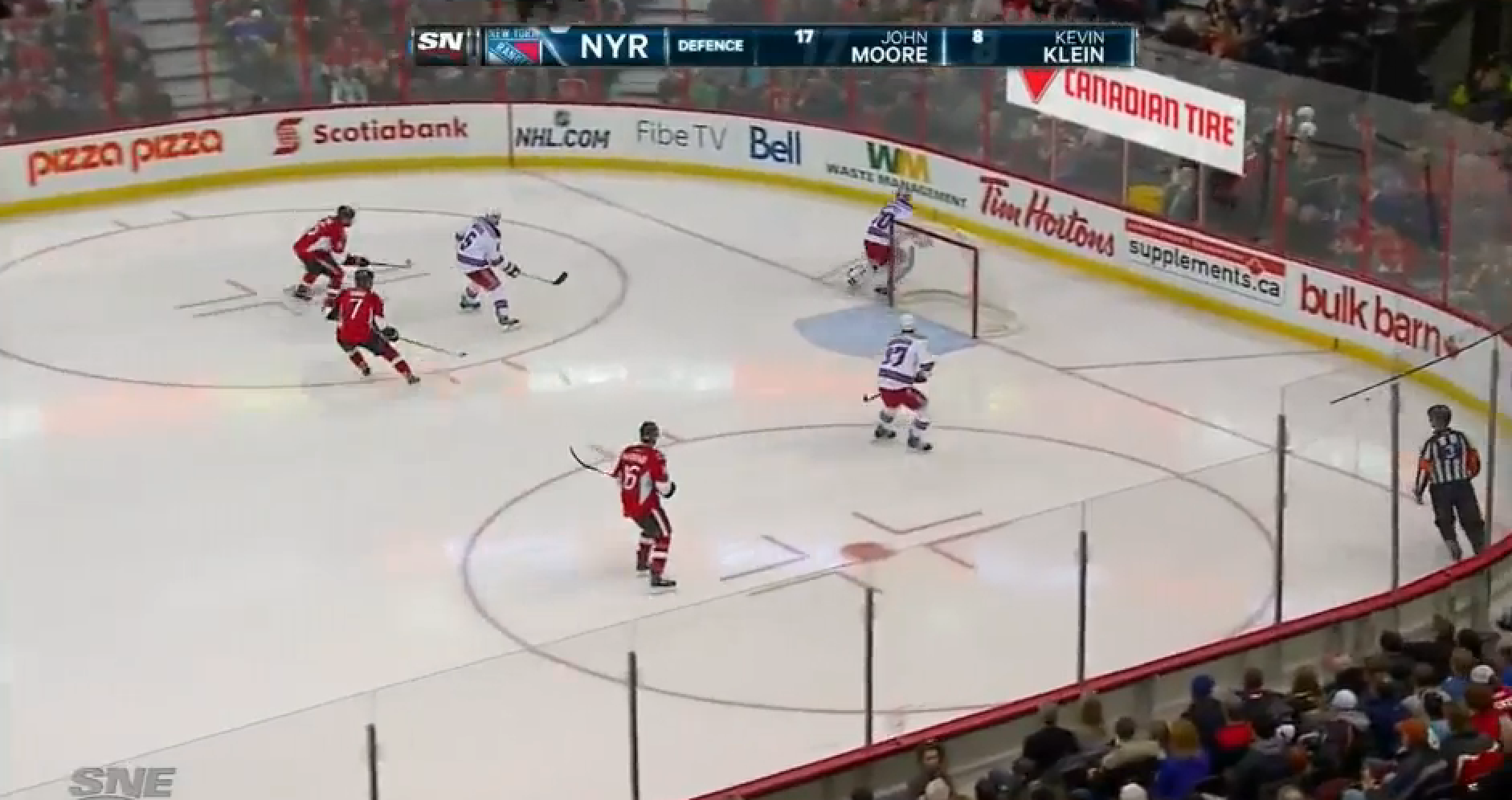 Again, a few seasons ago, Ludnqvist doesn't make this play. His lack of confidence in and actual ability to handle the puck saw him stay at home if anything was sort of in between with regards to leaving his crease or not. And in many former situations, Lundqvist would have panicked here. Dan Girardi, who was right behind him, was completely wrapped up. In front of him, a Sens forechcker was way too close to Ryan McDonagh for Lundqvist to look to feed 27 the puck. But Lundqvist has his head up, and can see Chris Kreider (not in the frame) skating toward the open pocket of ice up the near boards. Again, Lundqvist settles the puck rather easily, and remains upright, allowing him to fire the puck high up the glass to make sure it's not intercepted. 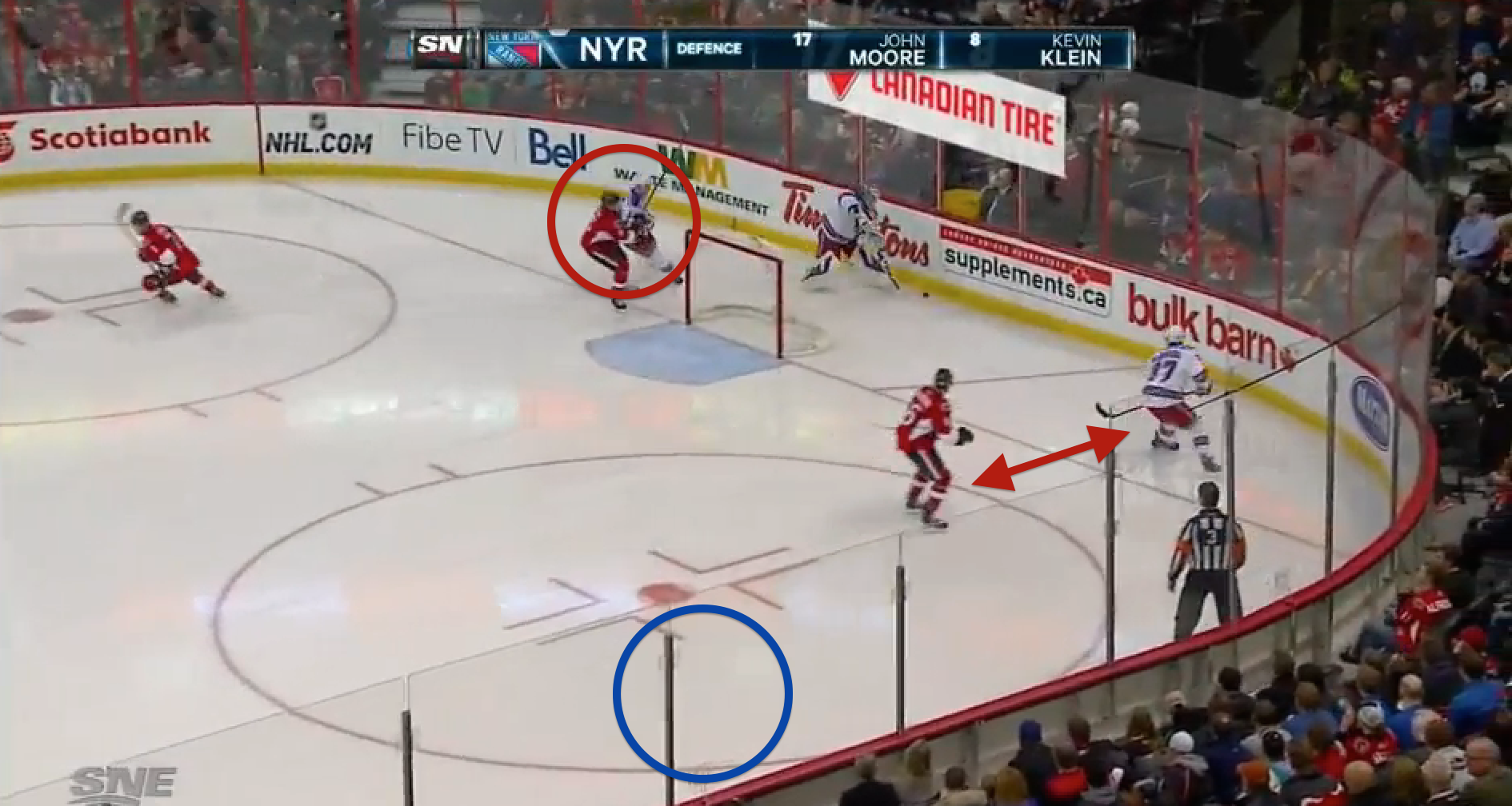 Kreider walks into the pass, and chops the puck toward center ice, getting the play out of his own zone, and forcing Ottawa to regroup. 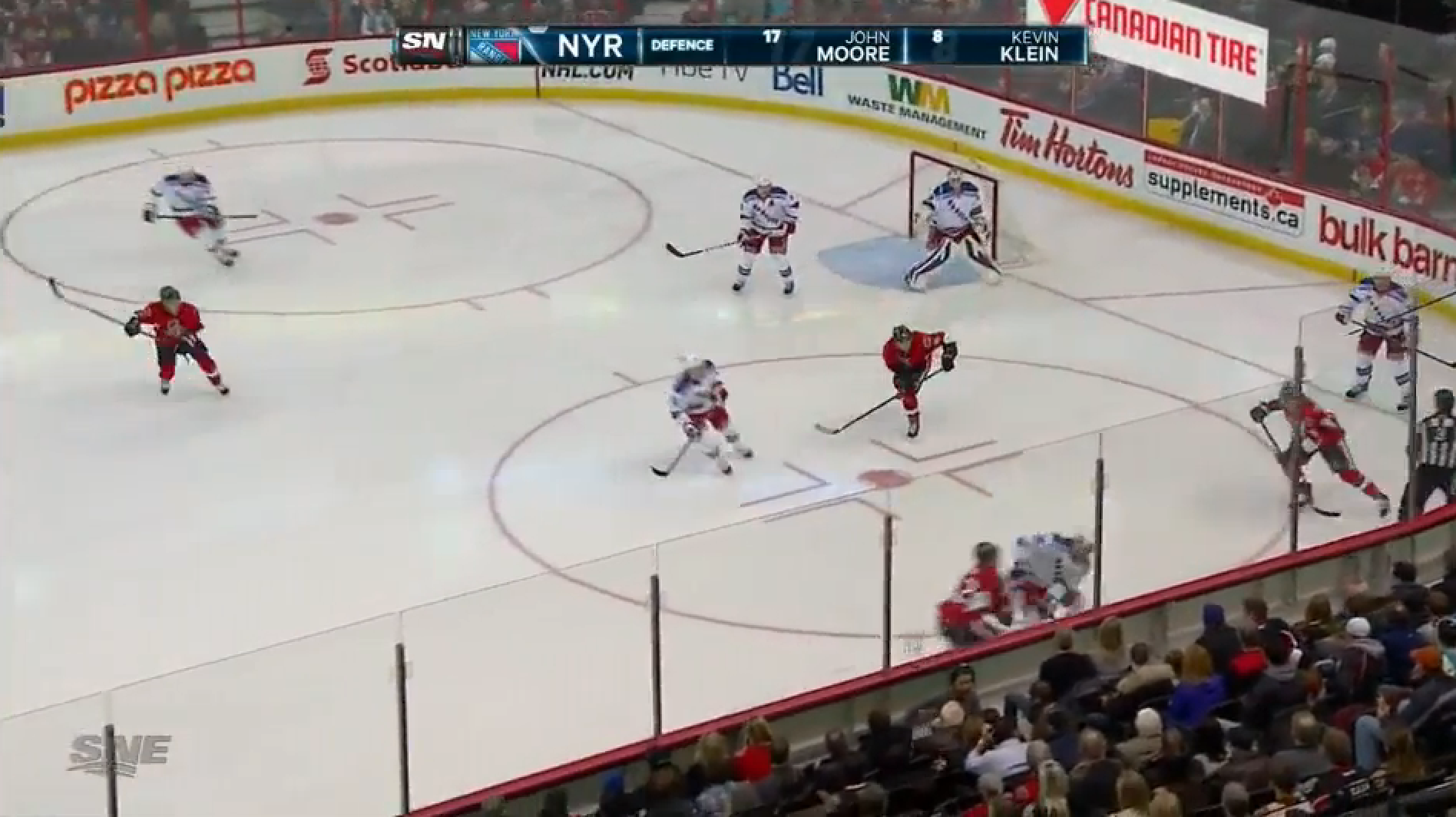 Puck handling isn't the most paramount skill for a goalie to have, but it's certainly not unimportant. Lundqvist still isn't in the same of the likes of a Mike Smith, or that Brodeur guy, but this is an area of Ludnqvist's game that's no longer worrisome, which, like in the situations outlined above, can come in handy for the Rangers.