No one had a more dramatic 2014 playoffs than Martin St. Louis and in Game Four of the Eastern Conference Finals, the MSG ice in late May helped give him his biggest moment.

You know the drill by now, guys. I post a video, put in some snazzy and informative screen caps, and include some witty banter on said goal. Let's get started shall we?

Still gives me goosebumps, but how did the Canadiens give Martin St. Louis that much time and space in the offensive zone? Let's go step by step on this one 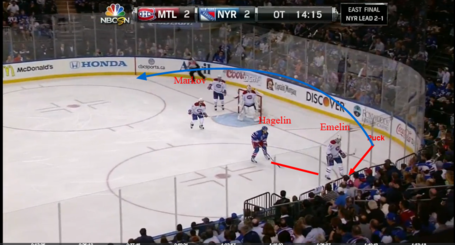 So this play started with a Rick Nash chip to begin a line change with Carl Hagelin the only Ranger in the zone pressuring the puck. At this point the Canadiens are in fine shape with Andre Markov, David Desharnais, and our old friend Alexei Emelin down low who is about to reverse the puck away from Hagelin and to Desharnais. 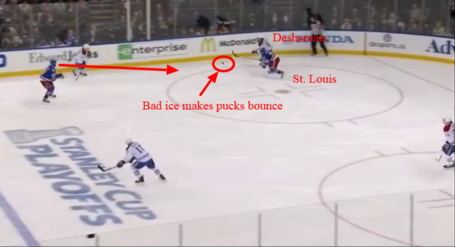 This is where things start to go screwy on the Habs, and yes, "screwy" is the correct technical term. As Emelin rims the puck around, Martin St. Louis goes hard on the forecheck after just coming on the bench and hounds Desharnais into trying to force the puck out of the zone too quickly and because this game was being played in late May and on the MSG ice, the puck took a funny bounce that handcuffed the Canadiens forward. Also, give credit to Brad Richards for making the great read at the blue line to keep the puck in the zone with a quick pinch and poke check.

As the puck is kept into the zone by Richards, it gets caught in the feet of Markov who is getting pestered by Carl Hagelin while Alexei Emelin again forgets to look around as Martin "370 career goals" St. Louis just slides into all that open territory in prime shooting position. This is just a great read by St. Louis as he sees that Hagelin will win control of the puck and that the Habs defense is the definition of lackadaisical here.

Oh, nice to see Emelin remember that he's supposed to be looking for someone else. To be fair to Alexei, small people are hard to see sometimes. After being stymied almost all series to this point by Dustin Tokarski, Marty pulls a little trickeration on the young goalie by dropping his shoulder early, which forces the smaller goaltender to go down earlier, leaving a nice big hole for Marty to shoot at.

A brilliant goal all around, let's watch it again