Interview with Elena Orlando of the New York Riveters

A versatile player capable of playing forward and defense, Elena Orlando has found a solid home on the blueline for the New York Riveters.

Share All sharing options for: Interview with Elena Orlando of the New York Riveters

When signing players that would comprise the first roster of a paid professional women's hockey team in New York, General Manager Dani Rylan and Coach Chad Wiseman were looking for exemplary character both on and off the ice. The signing of Elena Orlando, a Quinnipiac University graduate capable of playing forward and defense, reflected the team's priorities for forming a franchise that would make New York proud of their efforts at the rink and in the community.

Group hug! Bring it in for the real thing. pic.twitter.com/hFUmDc9Ngg

Orlando was born, raised, and began playing hockey in California, but on asphalt instead of ice. Her effort and dreams led her to Minnesota where she played for the hallowed hockey team of Shattuck-St. Mary's. She attended Quinnipiac University where she skated, as a forward, alongside fellow future NWHL players such as Kelly Babstock and current teammate Morgan Fritz-Ward. Her post-college hockey experience continued in Sweden prior to signing with the New York Riveters of the NWHL as a defenseman in the summer of 2015.

In his Coach's Corner article for NWHL.co, Wiseman noted the significance and value of the club's offseason focus. "All of the off-ice sacrifices, whether noticed or not, are a reflection of the character we have on this team. I strongly believe that character transfers over to our on-ice play, and as of late it is really starting to show." Elena Orlando is a striking example of this character. Selflessness seems to be an intrinsic part of her nature. Throughout the week leading up to the Riveters' games, Orlando works as a nurse and volunteers with her teammates in various community and charity events. When it is time to lace up the skates and hit the ice, she is a creative puck-mover who is always looking to set up those very teammates.

Unsurprisingly, Elena Orlando was gracious enough to do an interview with me for Blueshirt Banter. Let's meet the hard-working defender of the New York Riveters.

CM: What led you to first lace up your skates and start playing hockey and when did that happen?

EO: I started out playing roller hockey because my older brother wanted to try it and I was the younger sibling that wanted to do everything he did. When I was 5, they built an ice rink near our house. My brother made the transition to ice so of course I wanted to too.

CM: You played two physical sports, hockey and rugby, while attending Quinnipiac University. What is it about these sports that you love and are there any other sports you particularly enjoy?

EO: I loved that they were both fast paced and physical. They're very different sports but require similar skill sets so it was great how well they complimented each other.  I've always been a big sports fan in general, but I played soccer when I was younger so I like playing ‘keep-ups' with the team before games.

CM: What was your hockey experience like at the prestigious Shattuck-St. Mary's?

EO: I loved it there; they really helped me grow as a player and person. I had great coaching and played with some of the top players in the country. Two of which are in the NWHL, Alyssa Gagliardi and Brianna Decker of the Boston Pride.

CM: When did you first hear about the NWHL and how did you get involved?

EO: I heard about it around April and saw that they were going to be holding try-outs starting in May, so I contacted Dani about coming to the NY tryout and did the whole process from there.

Having the fans and youth teams at our games and seeing how excited they are is what this is all about. -Elena Orlando

CM: Why did you sign with the New York Riveters?

EO: I loved everything about the team.  I had seen the signings they made at that point and was able to play with a few of my now teammates either in college or at the Beantown tournament, so I knew it was going to be a great group and something I wanted to be a part of. Also, New York is a great place for sports, the fan bases here are die-hard and the support doesn't get much better than that.

CM: You have played both forward and defense in your hockey career, but you have been a true defenseman with the Riveters. How have you felt playing on the blueline this season and how would you describe your game?

EO: I've had some great support from the D and coaches so it has been an easy transition back into it. I love playing on the blueline, it's an awesome group and we all work well together so it's been great. I'd say that I'm a hard worker; I like to battle for the puck, be physical and block shots.

CM: Communication is a big part of the goaltender-defenseman dynamic. How has the chemistry developed between your defensive partners and Nana Fujimoto and how are you adjusting to the language barrier?

EO: Practice is a big part of that. We've worked really hard to get used to everyone's style and figuring out what someone might do in a situation. Nana has been awesome and there's been a lot of talk between drills to figure out how to adjust. Sometimes communicating can be a bit difficult on both ends, so we have "code-words" now for Nana to yell in certain situations to let us know what's happening. 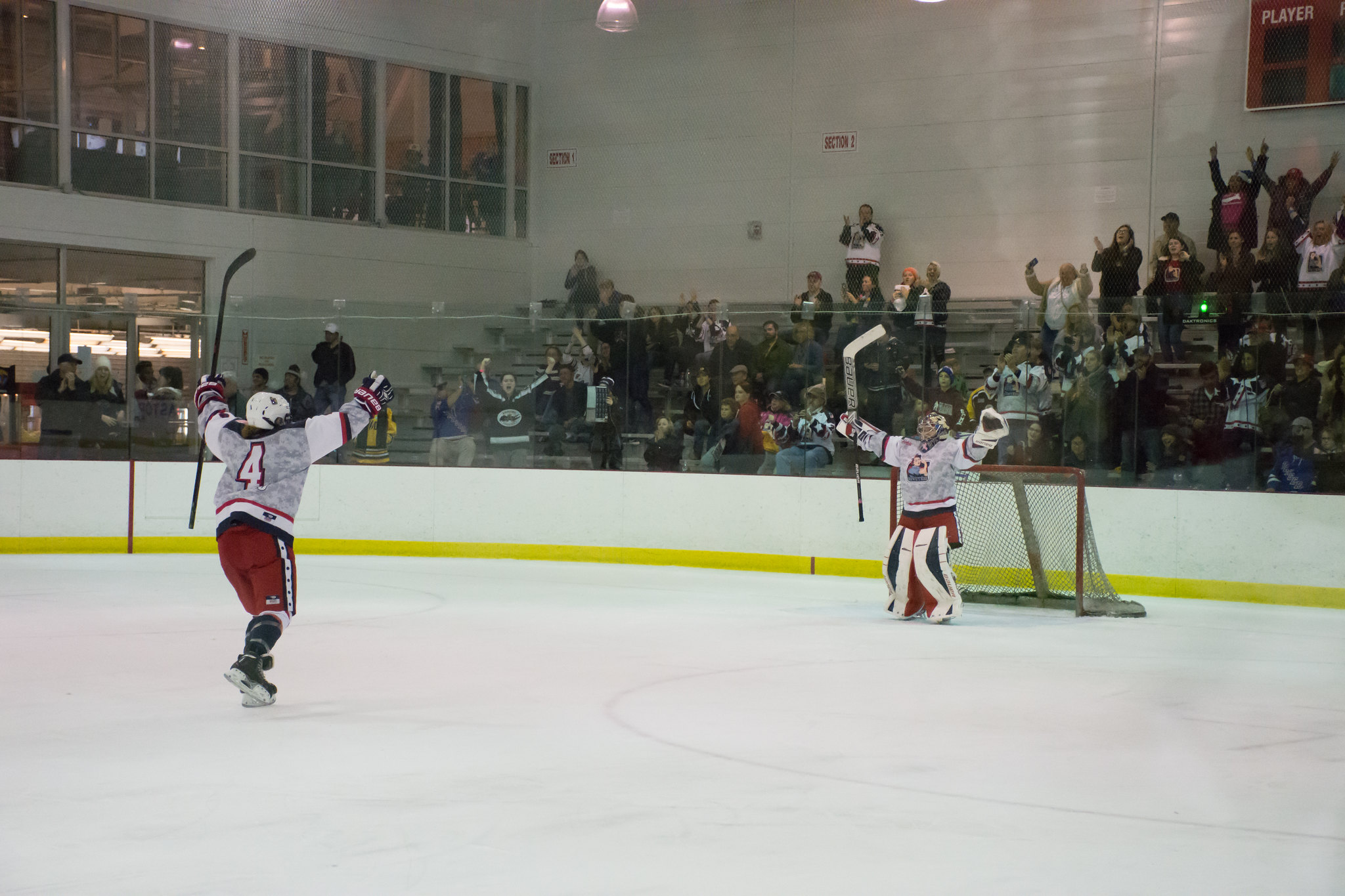 CM: Obviously the players and fans alike were thrilled heading into the inaugural NWHL season. Now that you have several games under your belt, how does it feel to be involved with this whole experience?

EO: It's still pretty surreal. It's amazing to see the impact it's having on hockey, especially the younger girls. Having the fans and youth teams at our games and seeing how excited they are is what this is all about.

CM: How has it felt playing against former teammates from college and alongside one with Morgan Fritz-Ward as professionals?

EO: Morgan is an amazing player and person, so I'm so excited to play with her again. And its great playing against old teammates so its always a good time playing against CT.  Kelly Babstock, Shiann Darkangelo and Chelsea Laden are great players but there's definitely a lot of smack talking when we play each other.

CM: You were born in California, attended school in Minnesota and Connecticut, and recently played hockey in Sweden. What is it like living and playing in New York and how does it compare to your past experiences?

EO: What I loved most about each place was it gave me a totally different experience than the others. New York is great. I've never really had the big city feel, I grew up in a small town in California, before we moved a few years ago. Faribault, MN and Hamden, CT were bigger than where I grew up but nowhere close to NY. There are so many different things to do here and different places to explore. It's like a new city everywhere you go. I do have to say though, traffic is terrible.

CM: Now for some fun ones: What does Elena Orlando like to do when she is not playing hockey?

EO: I work as a nurse so that takes up majority of my free time. But other than that, I love being outdoors, hiking and camping. I also like baking/cooking and hanging out with friends.

CM: How does it feel to have one of the best names in the NWHL? On a related note, who has the best nickname on the team?

EO: Haha! I wasn't aware of that. I'll be sure to tell my parents, they'll be pumped. Best nickname I'd have to say is probably Stretch (Ashley Johnston). Mostly everyone else's nickname is some variation of their name so Stretch is a bit more unique.

CM: Scenario: Coach Wiseman foregoes the usual on-ice practice for the Riveters and elects to run a game of rugby using the roster in a fantasy draft format. You are elected captain and given the first overall pick. Who on the team is your #1 selection and why?

EO: Oh man, this is tough one. I'm stuck between Stretch and Amber because they both played rugby. I think I'm going to have to go with Stretch. You really just don't find people with that height and strength everyday.

CM: Is there anything you would like to say to the fans?

EO: Thank you!!! We seriously have the best fans in the league, hands down. You guys have no idea how pumped we get to see the stands full and hearing the loud cheers, the energy is always electric.  You're awesome and we love getting to meet you after games.

On behalf of Blueshirt Banter, I would like to thank the New York Riveters and Elena Orlando for their cooperation and willingness to do these interviews amid their busy schedules. Follow Elena Orlando on Twitter (@e_orlando4) and the team (@NYRiveters) as they look to continue their winning streak on the road to the Isobel Cup.