My seats are in the middle row on the Chase bridge. The row behind me is elevated and the people sit on bar stools, so I'm able to stand up when I want and not worry about blocking anybody.

Good thing, because I stood almost the entire game.

The Garden was loud last night. Loud. As in we couldn't hear the anthem loud. It was a beautiful thing.

Before the game Tony told me that he felt good. After Ovi scored he texted me that he still felt good. When Holtby stoned Nash on the shorthanded breakaway he texted me 'now I'm worried'. Then that beautiful pass from Miller to Hayes and the place exploded.

Hank. Beautiful Hank. What more can be said? There were what seemed like minutes when the Caps were pressing and the Rangers couldn't clear the zone. Then we couldn't win any face-offs. Didn't matter. Hank Said No.

OT. The Caps were pressing but it felt like they were running out of gas. At one point he puck was sitting right by Hank's crease for what seemed like an eternity but everyone seemed to be moving in slow motion. Cleared. Finally.

Then the ice was cleaned halfway through OT. Time to finish it off boys. The Caps ice it twice. The sign of a tired team. Face-off win (finally!), pass - shot - rebound - YESSSSSSS!!!! The Caps make the fatal mistake and don't cover Stepan.

The Garden was literally shaking.

Watch the handshake line. Ovi was the 2nd Cap off the ice. I almost felt sorry for him. Great player. Great series. Holtby was unreal.

Like Joe said, the walk out of the Garden can go two ways. Echoes or ecstasy. I must say that the walk to Penn Station was an absolute delight. The LGR chants out on the street were deafening.

This was the first Game 7 I've ever gone to. It lived up to expectations and then some. I'd love to do it again but I'd really love if the Rangers could win in 4, 5 or 6. We could all use the break. 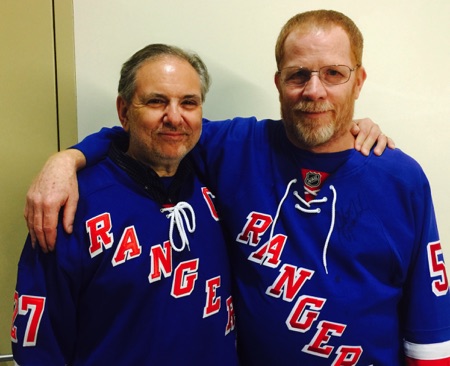 (Sorry for the camera shake. Either I was high-fiving everyone or the Bridge was shaking. Or both.)