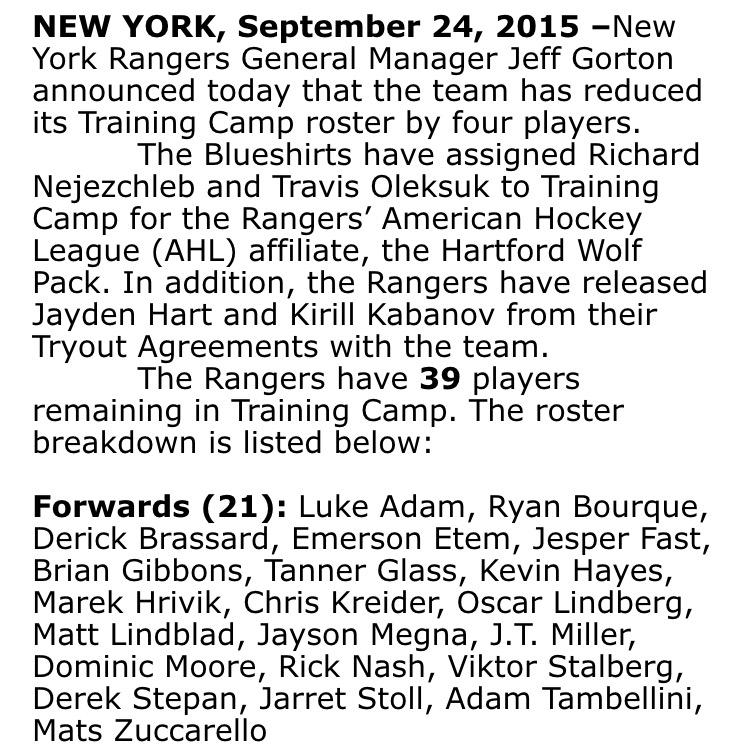 I thought Nejezchleb had a very good camp and I liked what I saw out of him against the Flyers, but it's no surprise that we're seeing the kids get cut early on here. As Adam Herman pointed out on twitter, the Rangers have Nejezchleb's contract rights until June 1st, 2016 and they are already up against their contract limit.

The Rangers and Vigneault are reportedly going to make the next wave of cuts sometime after tonight's game and we can expect the forward group to get shaved down to 18.

The training camp roster, which started at 62 bodies, is now down to 39 players heading into tonight's game in Boston against the Bruins. There are currently 21 forwards, 14 defensemen, and 4 goaltenders remaining in the Rangers' training camp.

So, who's the next to get cut? The safe money is on prospect Adam Tambellini and a few of the players that are destined for the AHL. It's worth keeping an eye on how long Brett Bellemore hangs on to a spot in the Rangers' training camp. The veteran and former Carolina Hurricane is with the Rangers on a PTO.

Thanks for reading. Let's go Rangers.