New York Rangers goalie prospect Adam Huska, 19, will be playing for the UConn Huskies this year. As a fellow freshman at UConn, and diehard Rangers fan, I asked him if he'd be willing to sit down for an interview. He agreed, and we later met to chat in his room along with his roommate, Mickey, who was polite enough sit in quietly on the interview. Needless to say, I was tremendously excited. I can only hope you enjoy learning about him as much as I did. So sit back, relax, and enjoy as we pick at the brain of one of the most exciting young goalies in the game. 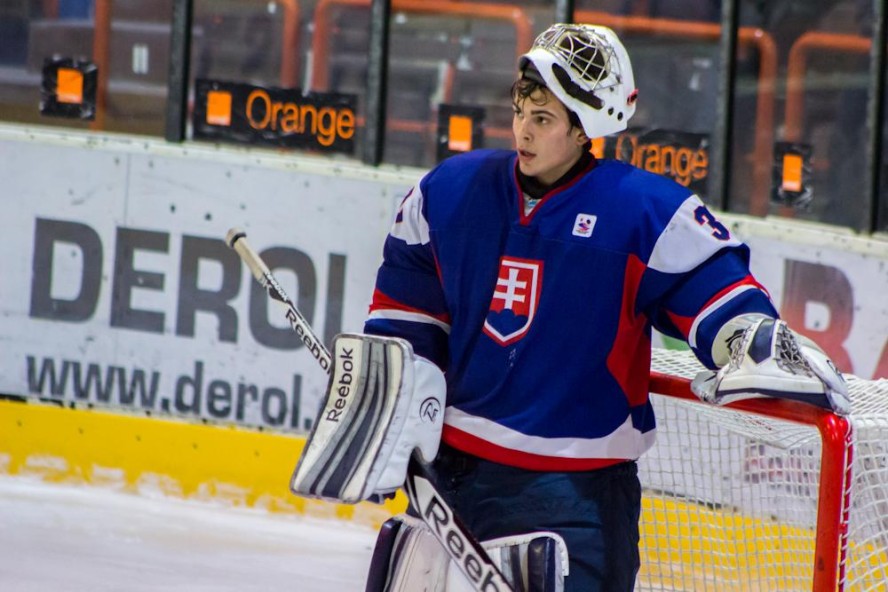 i Kan Spel Qood: Hi Adam, I'm Matt, i kan spel qood for Blueshirt Banter, how are you doing today?

iK: Alright, so, let's get to it. The first question I have for you is how have you been enjoying UConn so far? Do you like your classes? your teachers? made new friends?

AH: I like it here so much. Everything looks good [to] me. You know, people try to help me with my school, with hockey stuff. And yeah, I've made a lot of friends here so far!

iK: Do you have a favorite class that you take?

iK: Good, good, good. So, Chouder91 would like to know: Is there an NHL goalie, past or present, that you look up to or model your game after?

AH: I like Carey Price. I'm trying to watch his games, but I don't try [to] copy some goalies... how they play on the ice. I just want to play like I feel. You know what I mean?

iK: I do, yes. You wanna play like Adam Huska.

iK: When did you get into hockey?

AH: I started to play hockey when I was 6 years old. First I was a defenseman for three years, and I turn goalie, because our team, like, we didn't have a goalie, so coach asked, "who wants to try?" And I tried, and... I'm still goalie.

iK: I think it's worked out pretty well for you so far.

iK: Back in Slovakia, did you just go to a regular school? Cause here [in America] if you really like hockey, you can go to a hockey prep school. Is there anything like that back home?

AH: Uh, no I was in normal school, with normal students. It's harder to be [a] good student and be a good player in Slovakia. Teachers don't like it when sometimes we have to miss a class or exam.

iK: How often might you have had to miss a class? Was that for games?

iK: Did that happen very often? 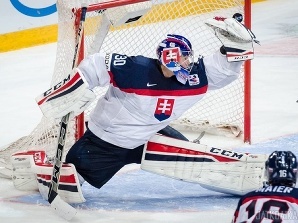 I explained to Adam that in the United States, primary and secondary schools always have their classes at a certain time, and sports teams are not allowed to schedule practices during class time. I hope to eventually go back and ask Adam more questions about his hockey years growing up. I was intrigued by how much of a sacrifice players have to make over there, and also how Adam made the sacrifice anyway and found major success. Nonetheless, I decided to move on with the interview

iK: When did you come over to America?

AH: 2 years ago, I came over to the Green Bay [Gamblers, his USHL team] for 2 months [January to March] They said I can come there to prepare for World Juniors. Then, next year, I come there for whole season

iK: How did it feel to be selected for the World Juniors?

AH: How did it feel? It felt great.

iK: I guess that was a pretty stupid question... 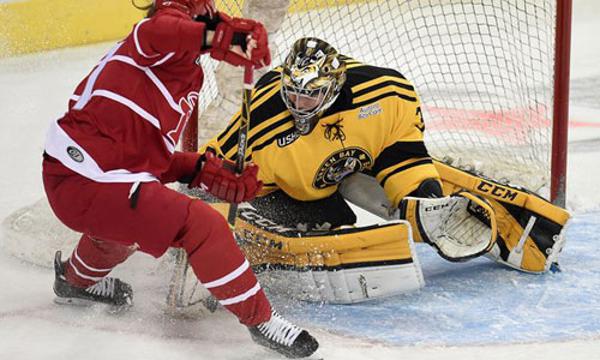 Ah, spoken like a true sports interviewer. Adam politely attempted to hide his acknowledgment that it was, in fact, a very stupid question. But, hey, ya live and ya learn. Adam and I then started talking about his huge year in the USHL, where he put up huge stats, posting a .931 sv% and a 1.82 GAA, both good for best in the league. He was thus named the USHL goalie of the year. I explained that I first started to follow him after he was drafted, and how much fun it was to watch him in those games (highlights were often available on the internet) Thinking of Pavel Buchnevich, and the move he was making to America, I figured I'd ask Adam about his own transition.

iK: How difficult was it to adjust to life in America?

AH: I remember my first day in the U.S. was really hard; the food was so different; everything was different. I didn't speak English... I still don't speak English (that one made us all laugh)

AH: It was so hard the first week. I had jet lag too. That was really hard for my body; I lost, like, 20 pounds, because I didn't eat anything.

iK: Wow, usually when people go off to live on their own for the first time, they GAIN 20 pounds. You had a problem that a lot of people would have liked to have.

AH: Haha, yeah. Let's see, then after this first week, which was really hard, then it was alright. It's getting better and better.

iK: How long did it take for you to get over the language barrier?

AH: About one month. Last year, it was [all about] getting better and better, but [it's still hard. Even] after summer, I came here and it's not good. But it's good, cause it's not like there's someone here from Slovakia or Czech Republic; so I have to every time speak English.

iK: Good, that's the best way to improve. My friend bleed'n blue asks: With all the distractions going on in college; parties, events, classes, etc... How do you prepare for each game? Is there a routine you do before games?

AH: My routine is: good sleep, good food, good music, and have fun. No stress

iK: Great, BlackTaurus asks: What do you feel are your strengths and weaknesses?

AH: My strength is I'm a good mental preparer, I'm a good skater in the crease... I'm big. Weakness is I'm not good at stretching (referring to his flexibility/athleticism.) Uhm...

iK: You're perfect at everything else?

AH: Haha, no, that's just the only big one I can think of.

iK: Why did you decide to play at UConn?

AH: I picked Uconn because it is a nice place to be and it is close to NYR. We play games at same rink with Rangers farm so we are close together.

iK: What do you do away from the hockey rink? In other words, what is your hobby?

AH: Playing some games on my PC (PC master race) or hang out with my friends. And study, of course.

iK: Hopefully, not quite in that order, haha.

iK: What's the biggest game of your career, so far.

AH: World Juniors. Every single game. It's the best games I've ever played.

AH: I don't understand this question.

iK: Neither do I.

AH: I can pick pool with tiger or pool with sharks?

iK: So, would you rather fight a tiger or a shark?

AH: Tiger in a pool?

iK: Tiger in an empty pool, or a bull shark in a filled pool.

Adam's roommate Mickey: You're not gettin' out of that tiger pit.

AH: *just as rhetorically* In the water???

Mickey: yeah, with the shark, you could--

AH: I run really fast, so I pick tiger.

We all had a good laugh with that one. 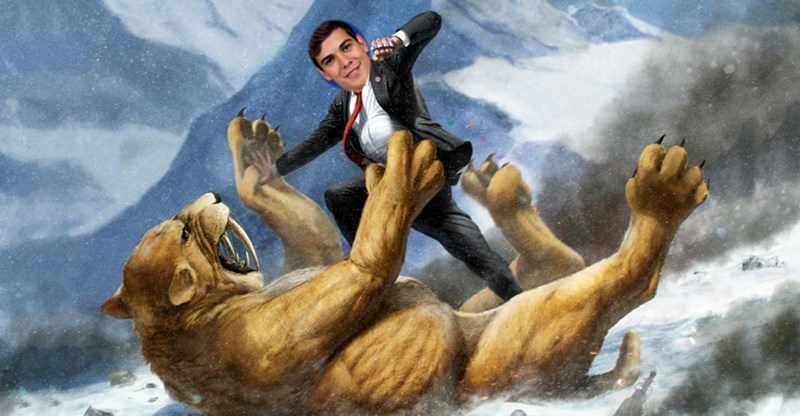 iK: What do you eat before every game?

AH: No, haha, I just eat food that's not really high calorie. Some chicken, with rice... something like that.

iK: Do you have a favorite movie ever?

AH: No. I just like horror movies or comedy movies

iK: Those are two fairly distinct genres, haha. What equipment do you use?

AH: CCM. My pads and my gloves are CCM. We have to wear Bauer pants and my helmet is Bauer too... my skates... [and] my kneeguards. 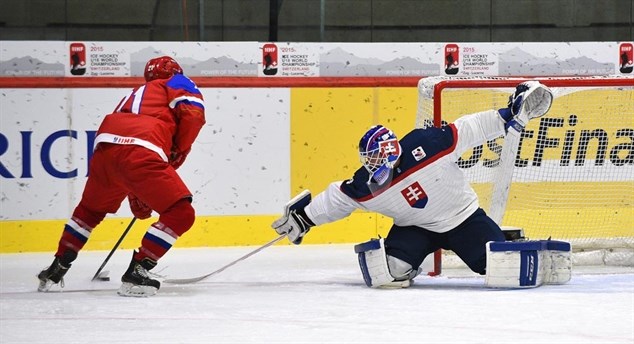 Thus concluded my interview with Adam Huska. On behalf of BSB, and the Rangers fanbase, I would like to extend my deepest thanks to both Adam and his roommate Mickey, the manager of the UConn hockey team, who were nothing but generous with their time. Best of luck to both of them on and off the ice, to the UConn Huskies, and to the New York Rangers. 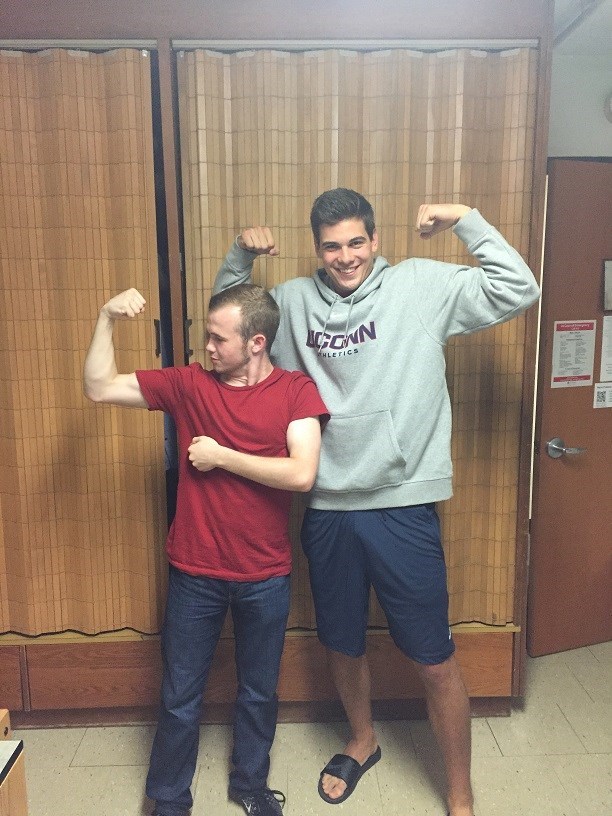 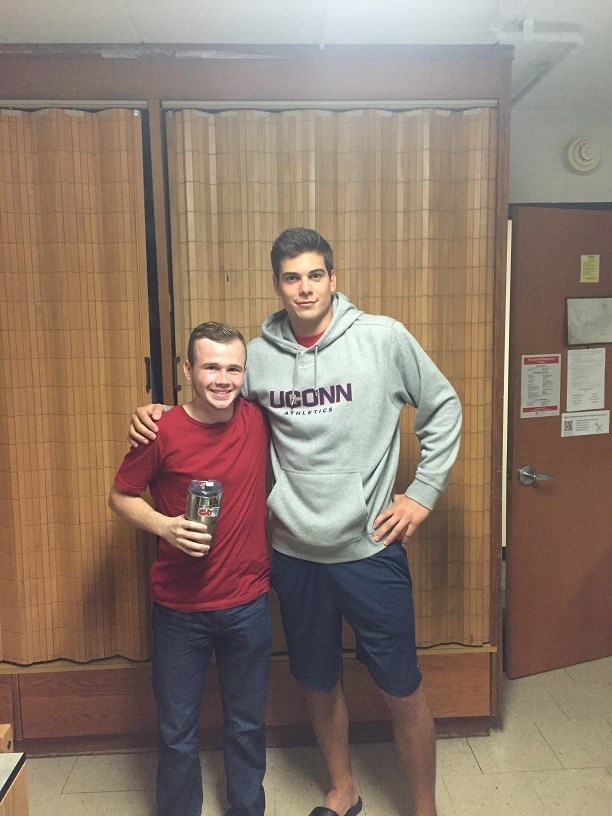 What would YOU pick?