Dear NHL, at last week's GM Meeting, you invited the submission of proposals to revamp the Entry Draft Lottery. Here's mine...

Why is it worth reconsidering the current draft lottery structure? Through the lottery, the worst teams have a high probability of suffering a modest fall in draft position while the better teams have a low probability of reaping a pretty big reward. On an expected basis, the weak teams are subsidizing a big payoff for one (or two) lucky strong teams. This can be seen in the following graphs.

Struggling teams are set up to fall in the lottery. The worst seven teams have a greater than 50% of falling. Those orange bars below towards the left are just too large: 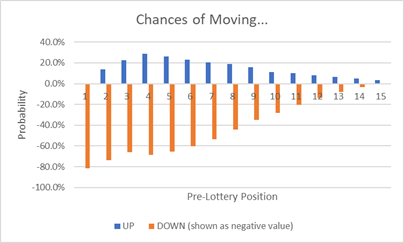 As shown above, despite the chances being low for any individual team to climb in the draft, when they do, the jump is massive. Undeserving teams are poised for big gains if they are selected to move up. Those blue bars below towards the right are just too large: 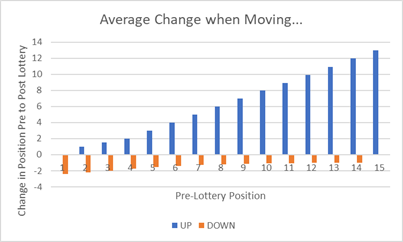 When viewed on an expected basis (multiplying the two graphs), the picture painted is too steep a price being paid by the weak teams to the strong teams. 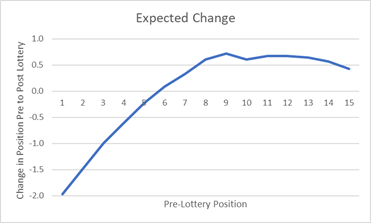 Summing the "area under the line" in the above chart, the five worst teams in the league are expected to collectively concede 5 slots in the draft to the ten best teams in the lottery. The biggest loser is the worst team in the league, bearing the brunt of the transfer cost with an expected loss in draft position of 2 slots. The best half of the lottery teams are each expected to gain over half a slot. A more equitable system would significantly flatten this line. The proposal described herein gets to that more desirable result. (As Seattle joins the league after next season, all discussion of the lottery from here forward assumes 16 teams/picks.) 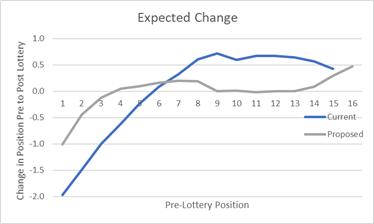 To arrive at this proposal, the following guiding principles were used:

1. No team should fall more than 3 slots (same as current)

2. Teams should be limited to gains in draft position of 3 slots with minor exception -- see last principle

3. The most likely outcome for a team should be not to move draft position

4. Where possible, a team should have a roughly 33% chance of gaining position

5. Where possible, a team should have a roughly 33% chance of losing position

6. Given a team is moving up or down, the average of slots moved should be approximately 1.5 in either direction

8. Worse teams should have greater probabilities for higher picks than better teams (same as current)

9. The progression of probabilities across "the grid" summarizing the distribution should be smooth

10. As a consequence of principles 7-9 (and in contradiction to principle 2), the worst eight teams should have a chance at the top 4 picks

And, how did these principles come to achieve the ‘flatter' expected change in position curve? The principles are demonstrated in the below probability grid produced by the random process underlying the proposal:

The diagonal of the grid is the highest value in each row and column (i.e, the mode of distribution for each individual team or pick). This means the most likely outcome is for a team to neither climb nor fall. The diagonal value varies but is on average roughly 35%. On either side, the distribution is reasonably symmetric giving a roughly 30-37% of no gain or loss in position. The probabilities spread 3 slots in each direction away from the diagonal, except for the expansion to the left of the fifth, sixth, seventh, and eighth worst teams up to the top pick. (Note that this exception is made with only the lowest of probabilities). The probabilities are smooth and monotonic away from the diagonal (i.e, no dips or jagged changes).

These takeaways can be seen more starkly by overlaying the diagonal peaks on top of each other to align for change from pre-lottery position. The below graphs do that first for the eight worst teams and then for the eight best team (I'm breaking this in half to avoid too much colored spaghetti on a single graph). Each line is a row in the grid, representing an individual team, with the diagonal peak value "centered" at zero. 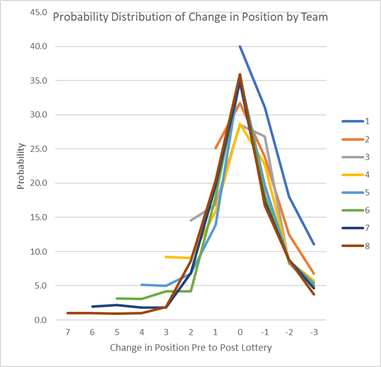 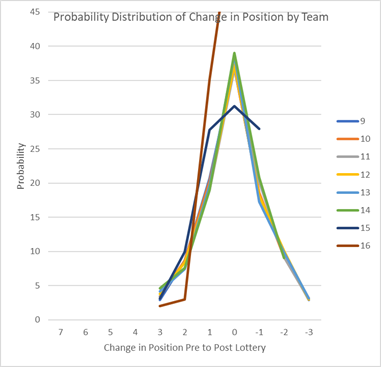 The above graphic demonstrates equity in two ways. For a given team, there is relative symmetry in the profile of moving up or down. Across teams, the distributions are comparable with quite similar profiles.

Another way to see this healthy amount of equity in results is the relative flatness of the following graph. Shown below is the probability of moving up or down 2 or more draft slots (the bars corresponding to the vertical axis on the left) as well as the remaining probability of being within 1 draft slot of pre-lottery position (the line corresponding to the vertical axis on the right). For the most part, teams are neither overly exposed to extreme moves nor saddled with downside outweighing upside (or vice versa), but obviously this cannot be the case for the very worst or best teams as their distributions are truncated by the top and bottom of the lottery. 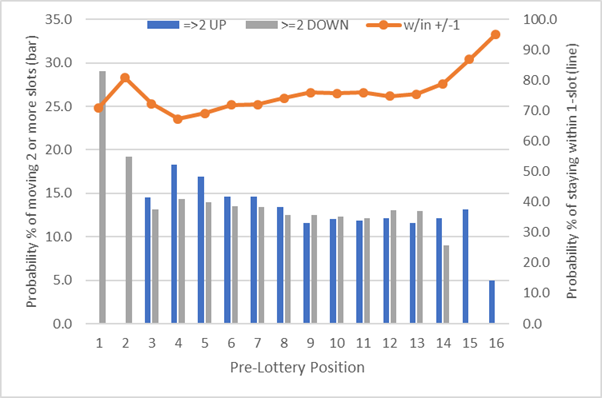 The following heat map shows the difference in probabilities of the proposal relative to the current lottery (i.e., the delta in grids).

Focusing further on the change from the current lottery, across all teams:

So, what is the underlying random process in this proposal? Unfortunately, the benefits of increased equitable treatment come with complexity as further described below.

This lottery proposal is actually the result of three lotteries. Lottery ‘alpha' is a scaled down version of the current lottery with the top 4 picks (#1-4) being allocated to the worst eight teams only. Lottery ‘beta' is an independent lottery (again a scaled down version of the current) where the bottom 4 picks (#13-16) are allocated to the best seven teams. Lottery ‘gamma' is dependent on the outcome of lotteries ‘alpha' and ‘beta' where the middle 8 picks (#5-12) are allocated to those teams not selected in the other lotteries. Furthermore, lottery ‘gamma' is more accurately described as eight mini-random processes that are dependent upon each other to shuffle and rank order those remaining eight teams into their draft position subject to the max 3-slot up-or-down move principle.

Further detail on each of the ‘alpha', ‘beta', and ‘gamma' lotteries is as follows:

The grid of probabilities for this proposal was produced by simulating the lottery 30,000 times. As expected, the results for picks #1-4 and #13-16 (the four leftmost and rightmost columns in the grid, respectively) converged to the a priori probabilities of the alpha and beta input. The ex post probabilities for picks #5-12 (the middle eight columns) were an indirect result of all other inputs.

Having designed the proposal and performed the necessary simulation to test its results, a few observations can be made:

So, NHL, what do you think? Any questions? Feel free to come find me -- if you contact the masthead at blueshirtbanter.com, I'm sure Joe or Mike can send word to me. Meanwhile, I'll be lurking here at 'the Banter'...

(All underlying probabilities for the current draft structure have been sourced from tankathon.com.)