This FanPost expounds upon a Bantering Points comment from last month about Covid realignment for the upcoming season.

Setting league economics aside, the most immediate constraint for the start of the 2021 season is the status of the US-Canadian border. The border closure forced the Blue Jays to relocate to Buffalo over the summer and is giving rise to speculation that Kansas City could temporarily host the Raptors next year. With seven teams north of the border, the NHL has a bigger challenge, which has led many to conclude the inevitability of a Canadian division. Travis Yost published a creative 5-division framework to group the US teams prioritizing regionalization. However, a more interesting theme highlighted by Pierre LeBrun on a session of TSN's Insider Trading was the fluidity of the landscape, implying that how the NHL starts the season is not necessarily the most desirable format in which to end it, if restrictions ease. Therefore, preserving optionality might be as an important an objective as geography, especially looking past the regular season into the playoffs where it is attractive to retain the broad structure of the Eastern and Western Conferences as they existed pre-COVID.

What follows is a description of a bifurcated regular season that includes a mid-season pivot that could be implemented based on epidemiological and -- let's face it -- political considerations. The first "half" is comprised of 30 games where a Canadian division is self-contained while the US has two conferences, split into four divisions, that play only within conference. The working assumption is that pseudo-bubbles would be in place to run site-based round-robin events to minimize travel and allow for a compressed schedule. The second "half" finishes out a 52-game season with a disbanding of the Canadian division. After those north-of-the-border clubs are absorbed into the 4 US divisions, the end result looks and feels very much like the pre-COVID divisional format. The roaming pseudo-bubbles could persist into the second "half", or perhaps the world changes enough to allow for more regular home-and-away games - either could work. However, focusing on the time constraints, let's go with the site-based events again and say that this entire season can be fit into 96 days or just over three months. Playoffs would follow, with pre-COVID qualification rules and structure. 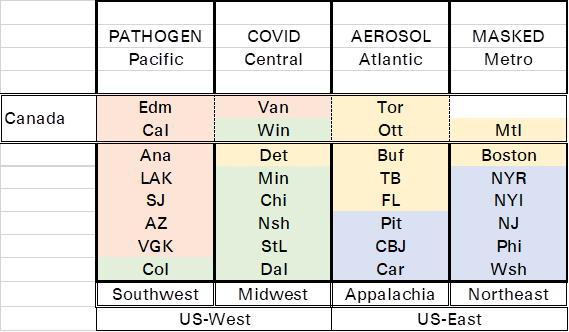 For the opening 30 games, the league is divided into the five divisions of Canada, Southwest, Midwest, Appalachia, and Northeast. Together, the Southwest and Midwest form the US-West Conference while the US-East Conference is comprised of Appalachia and the Northeast. Each US division has 6 teams. Note that no out of conference games will occur for US teams.

The 7-team Canadian division needs no explanation. Regional considerations drive the Southwest and Northeast, with Colorado joining the US Pacific teams and Boston linking up with Metro teams along Amtrak's northeast corridor. The choice of the Midwest and Appalachia divisions is more about the second half of the season, but overall, there is minimal disruption from pre-COVID alignment. The one exception is Detroit backfilling for Colorado with the other US Central teams and therefore crossing over from the pre-COVID Eastern Conference into the realigned US-West (sorry, Red Wings).

Why 30 games for the first "half"? Well, it's mostly the math of Canada having 6 divisional opponents and the US having 5. Canada can conduct five round-robin events while the US engages in six, and both reach the 30-game milestone. However, it is also about time. The decision to pivot is going to have to be made before the pivot itself, so it makes sense to plan for a longer first half than second half. As for the duration of this first half, it relies on pseudo-bubble site-based events where multiple teams come together for a compressed round-robin of games:

While the first half round-robin events are repetitions in Canada, that is not the case in the US, as there is opportunity for inter-divisional play within a US conference. That means the six events in the US are not the same. Two of the events require splitting each division to allow mixing to occur across a conference -- these are inter-division events. Let's call half a division a 3-team "pod", where pods do not change over the course of the season. A pod attends the first event with one pod from the other division and attends the second event with the other pod from the other division. This allows for one game against each non-divisional in-conference team. Furthermore, to balance out those extra games a team gets against its pod-mates, one of the four remaining divisional-only events will have repeated games against teams of the other pod. For example, let's pod the Rangers with the Islanders and Devils:

Therefore, in the US, a team will face non-divisional in-conference teams one time and divisional opponents five times, except for one team in the division outside of its pod only four times. This is 30 games (1 x 6 + 2 x 5 + 2 x 5 + 1 x 4).

Let's move on to the second "half", where it is assumed that the league can navigate the US-Canada border. The US divisions "accept" the Canadian teams as follows:

The re-integrated divisions are mild bastardizations of the pre-COVID alignment with: (1) Vancouver and Colorado switched (sorry, Canucks), (2) Detroit moved to the Western Conference in the Central, and (3) Montreal & Boston exchanged for Buffalo, Columbus, and Pittsburgh in the Eastern Conference divisions. Maintaining consistency across the two "halves" allows for the regular season schedule to concentrate on divisional play and for an easy transition into the divisional playoff format that has been in place for several years pre-COVID.

If conditions are such that the pseudo-bubbles continue to be necessary, the last 22 games of the season can be played in three events, where:

Because it is possible to conduct a 7-game event in 12 days without any of the eight teams attending having more than two back-to-backs, it should be possible to finish the season in 41 days, allowing for a travel day (or two) between events and that extra 8th game in the final event. Start-to-finish, this 52-game season should then go 96 days.

So, there you have it -- a 52-game season that pivots from a closed to open US-Canada border, crammed into just over three months, that leads neatly into the pre-COVID playoff format. However, inherent in all of this is a "Plan B" of staying in the first half format for the remainder of the season:

Hopefully, we get hockey back real soon, in whatever format, because the end of this calendar year is starting to feel INCREDIBLY long.