I cannot express how completely I do not care that the team will not do this.

Two months ago BSB's own Adam Herman asked an extremely wise question: "Should the Rangers consider trading Jacob Trouba?" Adam implied that the Rangers ought to wait and see how the rest of the season played out; I have seen enough.

Jake Trouba is the 6th highest paid defensemen in the sport of hockey; relative to his teammates his Goals For Percentage is currently 196th. Much of this is, admittedly, bad luck. But Trouba is also a net negative in Corsi and expected goals and ranks only 98th in defensive scoring at even strength. Worse still, despite spending more than 100 minutes on the Ranger power play, the eight million dollar man ranks well outside the top 30 in power play scoring. Each of Tony DeAngelo, Adam Fox, Kevin Shattenkirk, Josh Morrissey, and Neal Pionk is outscoring him on the man advantage, all but Shattenkirk by a wide margin.

Trouba, true, has played tough minutes (71st in TOI QoC); he is also 14th overall in the equivalent measure of teammate quality, and what we know about teammates and competition suggests the former is far more important. Trouba's shooting problems have continued and arguably intensified. He has 274 attempts this season, more than every Ranger save Artemi Panarin; this extraordinary barrage of slapshots has produced seven goals. Just five NHL players have shot more and scored less. Since entering the NHL just four players have taken more shots and scored on fewer than a man the Rangers are paying eight million dollars a year until 2026. Incredibly, Trouba has taken more shots than Mika Zibanejad over this period, managing to score at one-third the rate. He has shown no signs of stopping.

But wait, some say—Jacob Trouba is Young! And a defensemen! Astute fans may recall that Zdeno Chara didn't start to look good until he was well into his 90s. The Rangers, who have found a re-tool too cold and a re-build too hot, have settled into a build, and the 25-year-old Trouba fits just right into their timeline. He'll continue to grow until he reaches a peak in his late twenties, then gracefully decline as his contract runs out. Unfortunately, the previous four sentences are nonsense; as has been shown time and again, the average peak of an NHL player is in the early to mid-twenties. There are some saving graces: shooter talent may age relatively well, and power play scoring probably does. Trouba, though, is an exceptionally bad shooter who is not elite on the power play.

Average aging curves are a presumption, of course; presumptions can be rebutted. Has Trouba done so? His even-strength scoring rate looks to have peaked three years ago. His Corsi, goal, and expected goal stats are a career worst this season. While no one should expect massive decline in the next few years, he also shows no signs of being an exceptional player in terms of aging. This being the case, the thought of Trouba's production at age 30 should concern you. 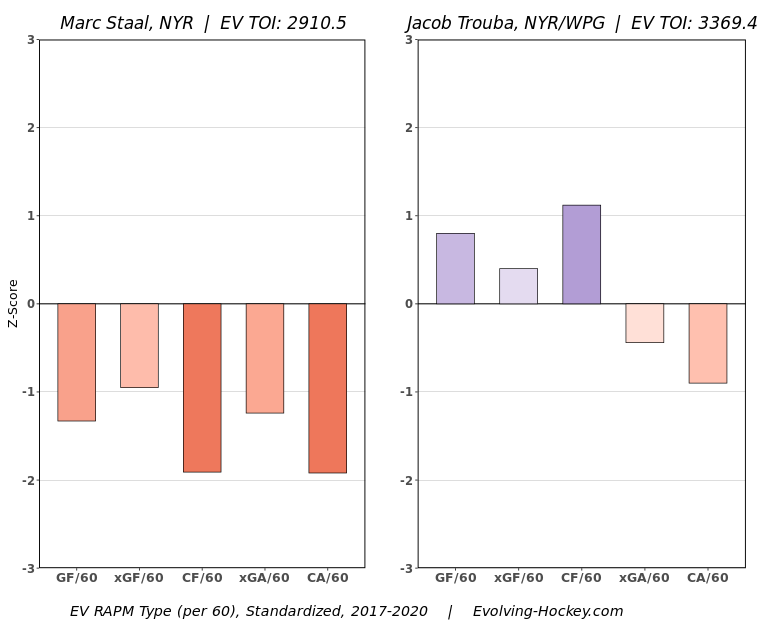 He's fine. Fine is not this expensive.

These facts justify moving Trouba independent of any other considerations. His pay is massive and massively out of line with his performance; the Rangers have young forwards and young defensemen who would provide more value for that money. And the value of the increased flexibility discarding Trouba's AAV and term would provide is substantial—an extra eight million to drop when the team is actually ready to contend could be a difference-maker.

Circumstances, however, make it even more clear that the Rangers should do the utmost to correct their mistake while they still can. While the team's forward depth is so shallow that Brendan Smith has been allowed to get outscored 3 to 1 this season with nary a peep from anyone even remotely connected to journalism, their defensive depth is strong. At the prospect level, Matthew Robertson is well-regarded, K'Andre Miller is impressive, and Joey Keane has surprised enough in his age-20 AHL season to earn a deserved call-up. At the NHL level, Adam Fox has stepped in and posted sterling stats across the board, highlighted by a 6-overall rank in power play scoring. Tony DeAngelo's luck has finally turned around. To top this off, 19-year-old, beloved, and Stralmanesque defenseman Nils Lundkvist has uncorked a howitzer of a season, scoring at a record rate while leading the SHL's best team in points. They are fine at this spot.

Trouba has been outplayed by both right defensemen on the team's roster and the team's best prospect plays his position. There is a very real possibly that the Rangers will end up forced to move a useful defender or shift a righty to the left side in order to accommodate Trouba's contract. At this moment he is an insurance policy taking up almost 10% of the team's cap space. This, with the opportunity to simply trade him so ripe, is unacceptable despite the chance of a trade being less than zero.

Consider this FanPost, then, a knowing plea into the void and maybe Tony DeAngelo's twitter feed—trade him, Jeff. The whole world is watching.