Player skills, no matter the skill or sport, are a dynamic entity constantly fluctuating throughout careers. Not only does a player's overall value (represented by a figure such as WAR) fluctuate as he ages, but so do his skills. The way these skills develop over time, however, do not follow the same path. Aging curve studies have been undergone ad nauseam and those studies can be found online (for specific examples I would look here and here). In most sports, conventional wisdom is to say that a player's "peak" or "prime years" are in his late 20s (so between ages 27 and 29). After further investigation, this assumption does not hold up and players actually peak earlier than we originally thought, especially in the NHL.

I looked at scoring and shot rates for NHL forwards over the last decade (rates are per 60 minutes of even strength ice time). While scoring and shot rates are not perfectly correlated with player value, they are measures of two skills that teams tend to pay for. Later, I will conduct a similar study with WAR. I pulled all of the information from Evolving Hockey. Both the scoring and shot rates were at even strength. To construct the curves, I used the delta method. The delta method consists of binning the changes in some measure of player performance by age grouping and averaging the changes in the statistic of choice weighted by playing time within each bin, and then looking at when those weighted averages peak across the landscape of the sport. I determined the playing time weights of each player season pair by taking the average of the playing time in each season in each bin. So, for example, when looking at Nathan MacKinnon in the age 21/22 bucket, MacKinnon's time on ice weight was the average of his even strength time on ice in his age 21 and 22 seasons, 1206.93 and 1137.47 minutes respectively.

The following represents the aging curve for the average NHL forwards even strength scoring rates: 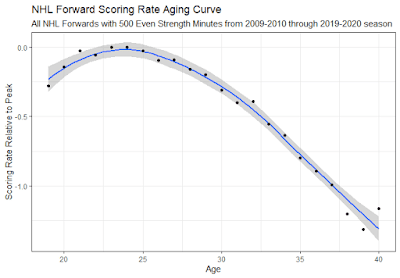 The age on the x-axis represents the age in the season of interest within the bin (so age 24 represents the age 23/24 bucket because for that bucket we are concerned with the scoring rates for that age relative to those at age 23). In general, NHL scoring rates for forwards peak at around 24, improve slowly before that peak, gradually decline for the rest of their 20s, and quickly decline in their 30s. This peak is much younger than previously thought and at least 3 years before a player can become an unrestricted free agent. Keep this in mind when your favorite team signs a 30 year-old star forward to a massive free agent contract.

Similarly I looked at forward shot rates and found that the peak age is even earlier than scoring rates: 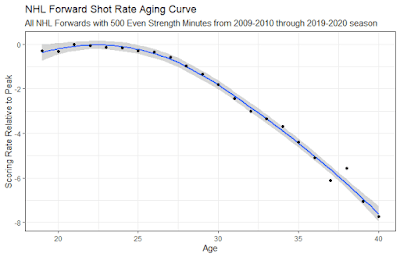 The peak happens around age 22 and there is usually only small improvement if the player enters the league before that. You can basically assume that when a player comes into the league, he will be firing pucks toward the net at as high a rate as he ever will be throughout his career.

Like I alluded to at the start, you can look at how players age with any number of statistics. While scoring and shot rates are reasonable barometers of forward productivity, more robust regression-based WAR metrics have been developed to value hockey players. In my next post I will look at how WAR and its component parts age, again using the data offered at Evolving Hockey.