If you have vaguely followed the NHL in the recent past, arguably the most evergreen phenomenon is Alex Ovechkin shooting from the left face-off circle on a power play. Not familiar? Take a look at his shot attempt locations with the man advantage since the 2007-2008 regular season: 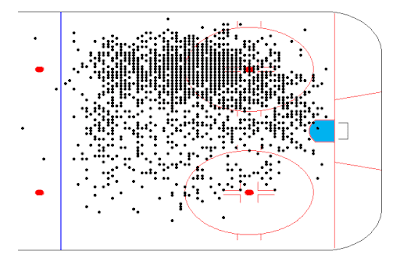 Distilling these locations into a contour map yields the following: 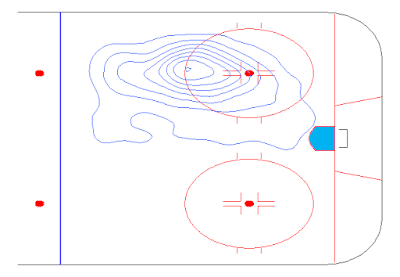 The Washington Capitals, in this time-frame, have ranked 3rd, 1st, 1st, 17th, 18th, 1st, 1st, 1st, 1st, 3rd, 6th, 14th, and 21st (this past season) in goals per 60 minutes on the power play. Over the entirety of the time between the 2007-2008 and 2019-2020 seasons, the Capitals have scored 7.94 goals per 60 minutes on the power play, 0.82 goals per 60 more than the second-place Bruins. The difference between the Capitals and Bruins is the same as the difference between Boston and Montreal, who ranks 17th. Recent struggles notwithstanding, the Capitals power play has consistently churned out goals despite the fact that everyone in the arena and on their couch knows where they want to move the puck. To boil down the Capitals power play to funneling Ovechkin the puck is a bit disingenuous, but one would think going to the well over and over again would lose effectiveness over time. One might argue that the Caps are seeing their predictable behavior come to haunt them in recent seasons, but I would argue that has more to do with relative effectiveness of some of the pieces as they age. For most of the last 13 seasons, the Capitals have had the best power play in the league.

Ovechkin is a generational goal scorer and arguably the best of all time. Funneling shot attempts to a player of that caliber (to the tune of 38 percent the past three seasons) seems like a shrewd strategy. But what about other players? Can funneling the puck to a single player on the power play lead to overall effectiveness if that player is not Ovechkin? To investigate, I took every player who has played 100 minutes on the power play (specifically 5v4 power plays) over the past three regular seasons. Next I looked at each of those players' individual shot attempt rates, goal scoring rates, and expected goal scoring rates. I then paired those with their on-ice shot attempt, goal, and expected goal rates and took the percentage of each that the individual accounted for.

Once I collected all the data, I first plotted the effects of funneling for all the players in the data set on their on-ice goal rates (my barometer for power play effectiveness): 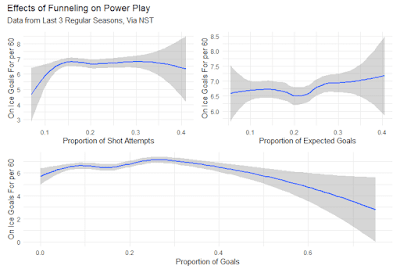 There looks to be not much of a relationship. At the tail end of the shot attempt and goal plots there appears to be a small negative relationship, so I filtered for players who I deemed the most used (at least 20% of shot attempt, goal, and expected goal share): 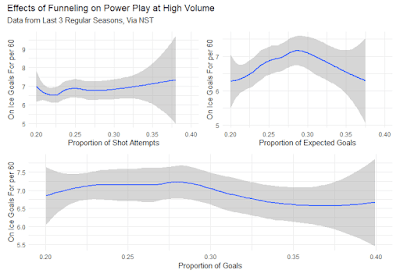 Still nothing. For expected goals and goals, there seems to be some diminishing returns at around 28 percent, but this does not persist with shot attempts. Finally, I split the data by forwards and defenseman to see if funneling to a specific player type has any effect: 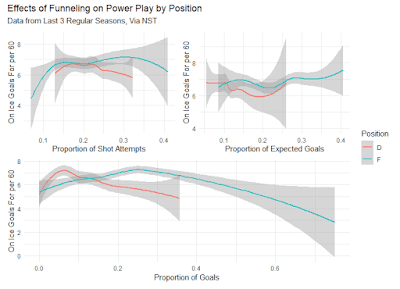 Given the locations from where defensemen shoot, it is not surprising that funneling offense in their direction yields worse results. They are often shooting far from the goal line, above the face-off circles. For forwards, it is still difficult to come to any conclusion.

In the future, I would like to dig into this deeper and see if funneling to specific locations for specific shot types can help explain the proficiency of a power play. Can a player like Mike Hoffman, who has a similar shot diet to Ovechkin but at the right face-off circle, prop-up a good power play? For now, I think we can safely say the following: funneling the puck to forwards is not an inherently bad strategy (without knowledge of specifics) and funneling the puck to defenseman is bad (which is not a revolutionary finding).

For those who are curious, here are the most and least used players on the power play based on percentage of shot attempts: 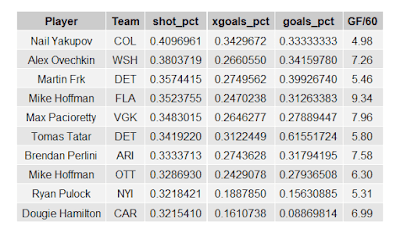 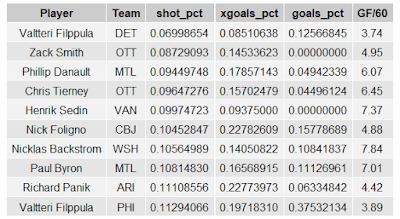 Shot location data via Moneypuck.com, all other data via Natural Stat Trick