With the Rangers season completed, I wanted to look at how coach David Quinn adjusted player usage throughout the course of the regular season. Even-strength usage, more specifically 5v5 usage, makes up a majority of a hockey game (to the tune of about 80 percent). First I looked at the 5v5 usage patterns on a weekly basis during the season for the players I deemed as "regulars". 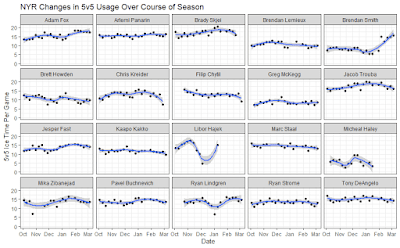 And here is the same type of plot but with biweekly usage for the most used players: 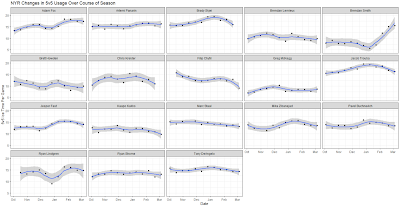 Seems like Quinn trusted Fox and Lindgren more as the season progressed. Chytil started seeing much less ice time at 5v5 towards the end of the season, as did Howden (definitely to the benefit of the team). Smith saw a huge influx in usage, probably attributable to his switch back to playing defense. Skjei also saw a lot more time right up until he got traded. This makes me think the team was trying to showcase him and they came to the conclusion they were going to move him a few weeks before he got traded.

Overall, it will be interesting to see how much time Fox gets next season (whenever that happens). Given his on-ice results I would like to see home more consistently lead the team in ice time along with Trouba. The Chytil usage is a bit concerning. Given the lack of center talent in the organization, he is a big piece moving forward so giving him ample ice time will be imperative in evaluating whether he can be the second-line center of the future.