"Right when fans are looking forward to the start of the NBA and NHL seasons, Comcast dropped MSG Networks to try to force us to accept terms they'd never agree to for their own regional sports networks, including SNY in New York," - MSG Networks' statement.

I'm surprised this hasn't come up yet...

As everyone must know at this point, Comcast, claiming that MSG Network's Audience Is 'Virtually Non-Existent', has blacked out MSG. At this point, it appears that there is no resolution on the horizon.

So I apologize to relay the bad news, but somehow I feel obligated:

None of you exist - or at least, virtually none of you.

In all seriousness, the part of this I find most objectionable is the timing. Reportedly, MSG offered to keep the existing terms of the contract temporarily, so that fans could still view the games as a potential new agreement is worked out. At the ver least, maybe that would allow viewers one last season before the Network is permanently dropped from Xfinity's lineup.

Just like in Hockey, it takes (2) combatants to drop the gloves, so there is likely fau;lt on either side. However, I find Comcast's behavior here to be just plain bad business practice. 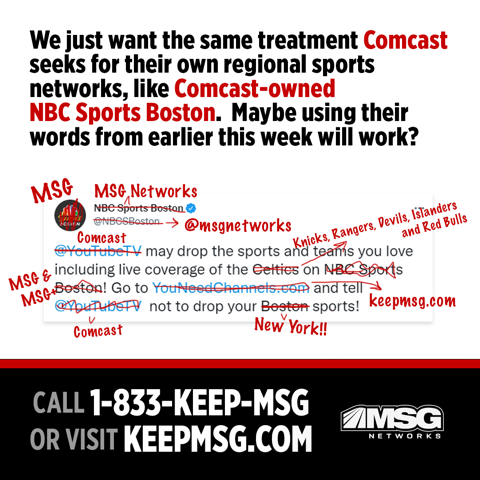