As the new season approaches, the self-set deadline for naming a captain too has approached. Chris Kreider, Jacob Trouba, Adam Fox and Mika Zibanejad, with the latter two seemingly being the fan favorites, are arguably the sole candidates for this position. And even though I too have long anticipated naming a captain, perhaps waiting another year, or at even half a year, may be a safer call.

While preseason must be used quite cautiously and sparingly when judging a team at the start of a season, it may serve as a slight indicator of individuals statuses at the beginning of the season. And what I mean is that our 2-2 record should not be used to justify a complete overhaul and abolishment of our playoff hopes, but the performance from a prospect like Nils Lundkvist or rising star like Kaapo Kakko in these game may indicate what reasonable expectations are for an individual player.

And what does this have to do with captaincy? First and foremost, let us examine each of the four candidates listed. Chris Kreider, the Ranger with the longest tenure, has always been seen as a leader. He speaks Russian, which many Rangers players speak as their first language, seemingly commands respect among the locker room, and has a name that is familiar even among casual fans. Yet his inconsistency is often the immediate rebuttal to his candidacy. And to this I not only agree, but also add that when he does contribute, he tributes significantly. So the question we must ask is if the potential gain from his leadership as being named captain outweighs the probable loss of his contribution at the hands of the pressure of being a captain. This question may need to be answered later in the season, after the team has gelled under the new coach’s system.

And then there is Jacob Trouba. Arguably, the majority of his eight million dollar contract is not earned by his point production, but rather by his on-ice leadership that often comes in the form of physicality. While similar to Kreider in that a loss of production from Trouba due to the captaincy will likely not have as strong an impact on the team’s overall performance, unlike Kreider Trouba’s name and brand are less known to the casual fan. Hockey is, after all, a business, and it would behoove the team to select a more well-known figure that could headline advertisements and ultimately serve as a/the face of the franchise. 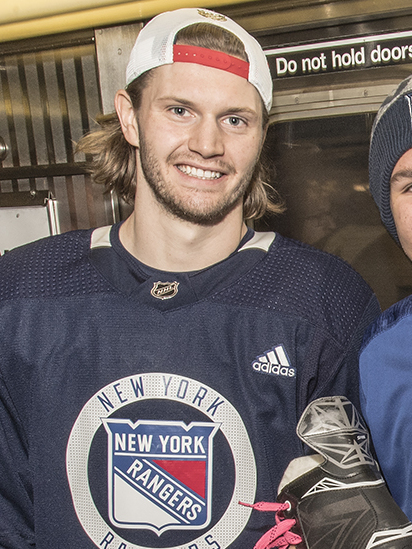 Adam Fox, the 2020-2021 Norris Trophy winner, grew up a Rangers fan and is entering his third season in the NHL. The concept of having a young superstar captain à la Connor McDavid and once Jack Eichel, is definitely not new and is very much a hit-or-miss game. We have seen McDavid thrive in the role and continue his dominance, but we have also seen Eichel, well, be unsuccessful, to say the least. Granted, Adam Fox would be given the captaincy at an age several years older than the ages that Eichel and McDavid received the C, which does ensure more maturity and experience in this selection. However, Fox is a quintessential part of the team’s point production, defense, and offense. Is his leadership worth the risk of losing his elite defense and playmaking ability? On a team desperate for more production, perhaps it is better to wait and see if other players, like Nils Lundkvist who has shined brightly in preseason, are ready to step up and prosper even if Fox’s production drops.

And finally, Mika Zibanejad. He seems like a natural fit, right? Great personality, long tenure on the team, top scorer and respected. Notably, he comments how he leads by example, which may very well be the best way to lead this young and energetic team. He however did start last season with a slump, something possibly related to his COVID-19 contraction. This early season slump might reoccur this season, so we must proceed with some hesitancy and patience regarding our expectations of his performance. And so, his candidacy too may reveal the necessity to postpone naming a captain, ensuring that Mika, should he be named captain, is in his full form before undertaking that responsibility.

Perhaps Kaapo Kakko will finally make the major step in point production. Perhaps Alexis Lafrenière will be more impactful. Perhaps Nils Lundkvist will have a very successful rookie campaign. Whether they come out hot or cold, we must wait to fully assess where they are at and wait to predict where they will be until we have at least a couple month’s worth of games of data. And hopefully their production, along with their teammates’, by mid season, will be able to safeguard the team on the ice enough to allow a captain to grab the steering wheel and lead the team into playoffs, and hopefully, beyond.

And like I said earlier, I would love to see any one of these four candidates sporting the C. And I am anxious to see who the Rangers end up choosing. But, I also want to be confident that this player is the right choice and that this player will maximize the captaincy to the fullest extent possible. And so to that, I wonder if waiting may be the best way to prevent error. After all, a captain should be the leader of the locker room, and I hope that one of these four players, or maybe someone else, will become the lead voice on his own merit before the captaincy is even granted to anyone.